Reading Greece: Ilias Gris on Greek Poetry and the Generation of the 1970s

Held every year on 21 March, World Poetry Day celebrates one of humanity’s most treasured forms of cultural and linguistic expression and identity. Proclamation by UNESCO of a World Poetry Day on March 21 has been largely the result of initiatives by members of the Hellenic Authors’ Society. In 1997, Greek poet Michail Mitras proposed to the Society that a day be designated for a celebration of poetry in Greece as well as in other countries and later poet Lydia Stefanou suggested that March 21, which usually coincides with the spring equinox, be selected. 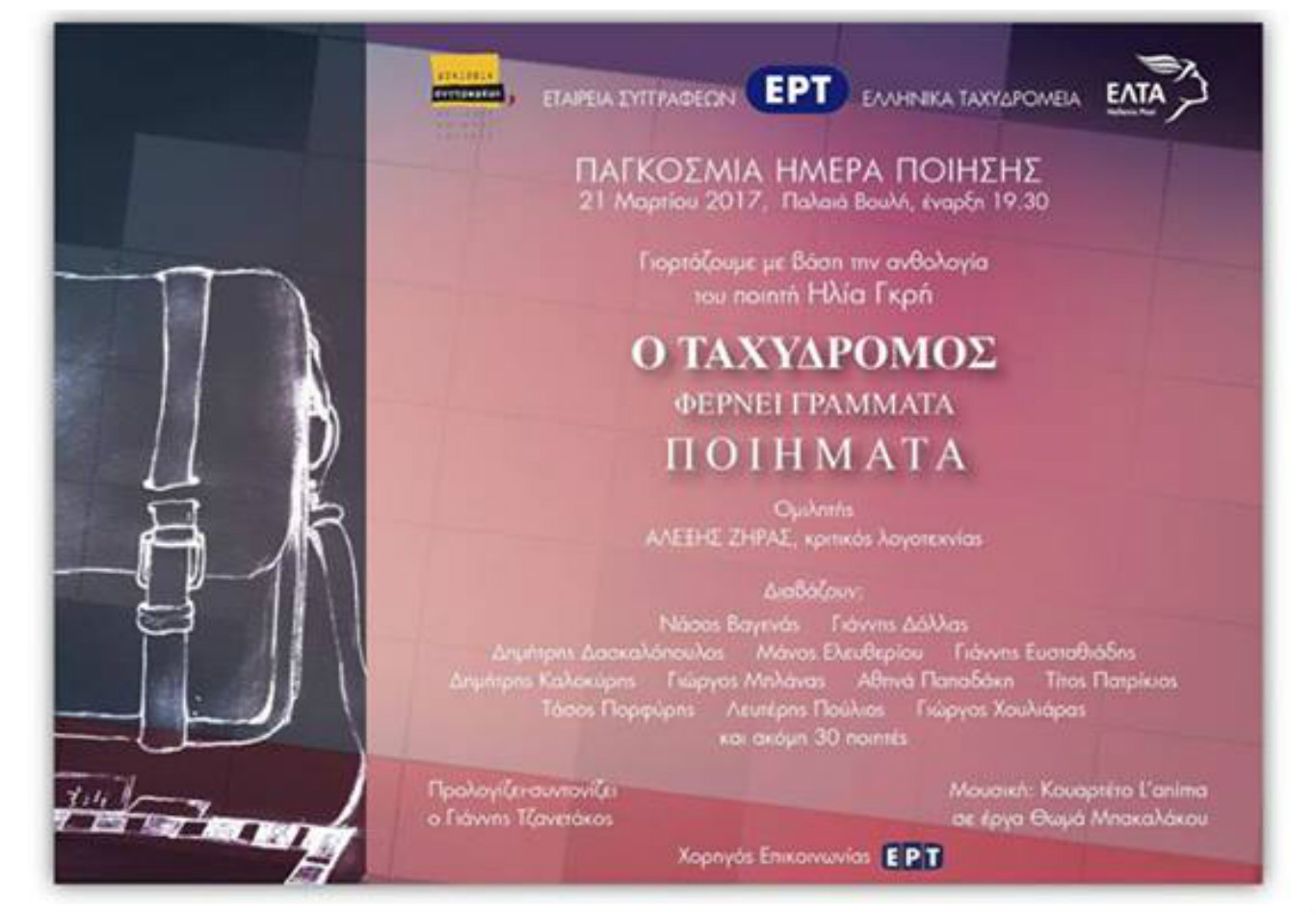 The first Poetry Day in Greece was successfully celebrated by the Hellenic Authors’ Society in 1998 at the old Post Office in Kotzias Square in Athens. The following year author Vassilis Vassilikos, Greece’s permanent representative to UNESCO at that time and president of the Hellenic Authors’ Society later, recommended to the United Nations Organization that March 21 be proclaimed a World Poetry Day. Supported by many countries, the Greek proposal was adopted and World Poetry Day has been celebrated internationally since 2000.

Greece, with its rich poetic tradition, will honor World Poetry Day 2017 with celebrations all over the country. The Hellenic Authors’ Society, jointly with the Hellenic Post and the Greek State Broadcaster (ERT) will organize an event at the Old Parliament House where there will be presented a new anthology by Ilias Gris titled Ο ΤΑΧΥΔΡΟΜΟΣ ΦΕΡΝΕΙ ΓΡΑΜΑΤΑ ΠΟΙΗΜΑΤΑ [The Mailman Brings Letters Poems], with the participation of forty poets included in the anthology. Ilias Gris (1952) belongs to the so-called “generation of the 1970s” in Greek poetry. Apart from poems, he has also written prose, essays and five thematic anthologies. His poetry has been included in various anthologies and has been translated in English, French, German, Spanish, Italian, Russian, Bulgarian, Albanian and Persian.

Ilias Gris spoke to Reading Greece* about what changed and what remained the same in his poetry from the late 1970s when he published his first book to the present, noting that “if there is something that remains the same it is the poet’s vain passion and longing for the aesthetic perfection of his work”. He also comments on the anthologies he has published, explaining that they offer “a different insight into the ongoing preoccupation and turmoil that poetry entails”, “a pretext to speak as a writer in a different guise”.

Asked about the “generation of the 1970s”, he notes that “the burden of causes betrayed” has been “the most distinctive aspect of modern Greek poetry in its entirety” and adds that “it is the most diverse generation where a variety of voices with many different features converge”. He concludes that in times of “dynamic upheaval and unrest”, poetry – the vigilant guard of human conscience – “acts either as a consolation or as a secret blare for unsettling consciences”.

From Ρημαγμένη Πολιτεία [Ruined State] in 1980 to the comprehensive Λήθαργος Κόσμος [Α World in Lethargy] in 2014, how has your poetic work evolved during this thirty-five year period?

To be more precise, we should say from Oμολογίες [Testimonies] in 1977, although I have long disavowed that book. It was then, in the middle of that decade, that I made my first appearance, although I had been writing poetry long before. Even during the previous years of repression and demoralization under a dictatorship, a youthful spark had kept burning, if you were a free spirit. So, I started one evening, when poetry took my hand. Without any help! I was working in construction in order to survive, a feather in the wind, but reading and writing feverishly. I popped in and out of various doors, one time conversing with symbolism, other times with a social vision and its underlying political reflections. And there were times when I felt overwhelmed by an existential anguish… I can now say with certainty that I am one of those poets who, despite many deviations, always found their way back. And my path in poetry was an evolution. 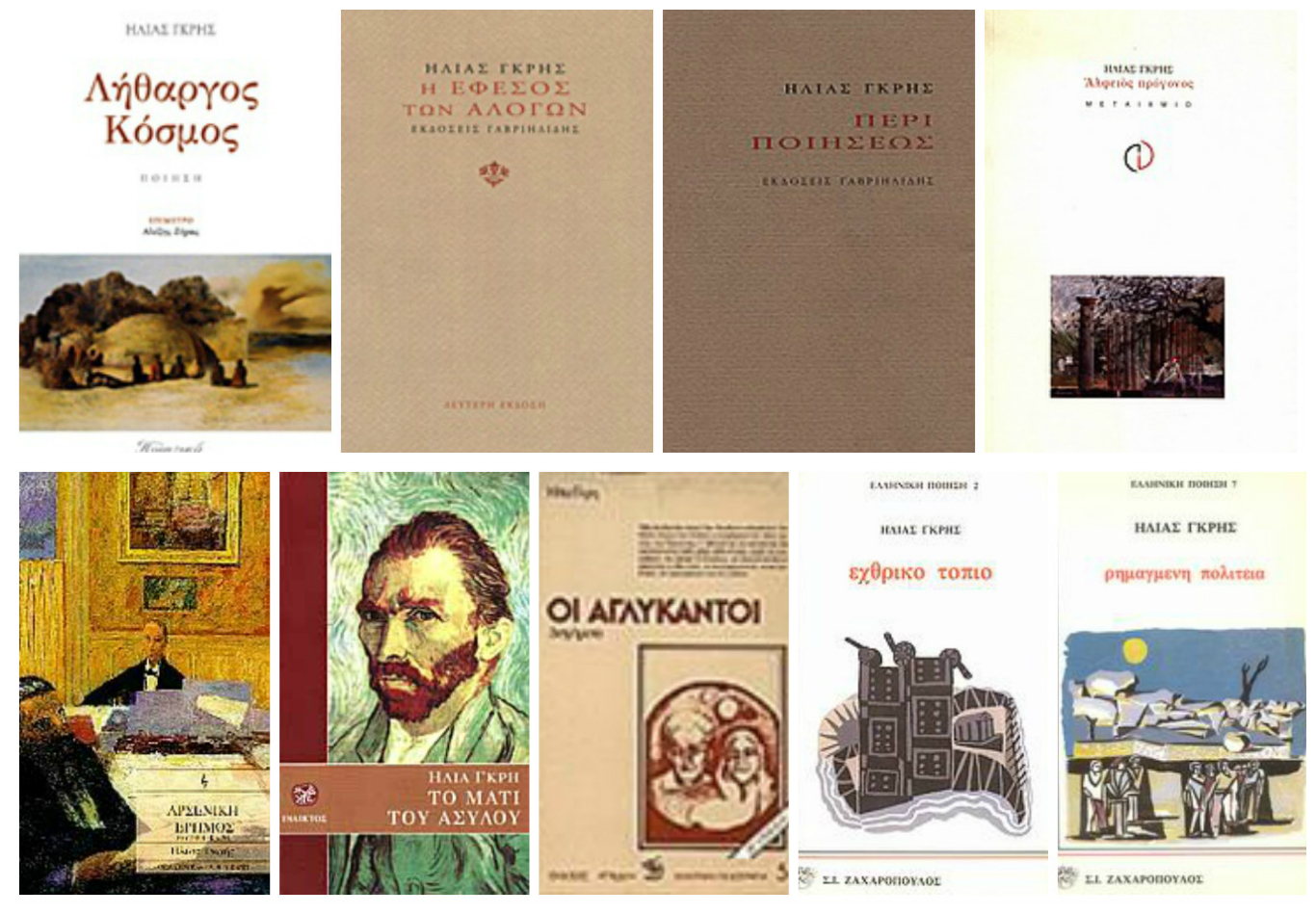 What changed and what remained the same?

If there is something that remains the same it is the poet’s vain passion and longing for the aesthetic perfection of his work.

Your poetry moves around three axes: social, existential, philosophical. What are the main themes your poetry touches upon?

Depending on his mental and emotional state, formed largely as a result of social conditions, a poet chooses to temporarily rest in one of these directions or to remain there for life. As for my poetic character, it is to be found in that first disavowed book. Yet, as time went by, I was more and more inclined towards a historic reading of human adventure. In this respect, I feel closer to Cavafy.

Which have been your main influences?

A poet’s ‘debts’, until he finally carves his own path, if he does, are many and varied. And I have to admit that apart from some names – some of them truly beloved as Yannis Ritsos, Nikiforos Vrettakos or Takis Sinopoulos – all my ‘debts’ converge on our fabulous, unsurpassed, and unrivalled demotic or folk tradition. I fell in love with it from an early age and remained faithful to it.

Apart from poetry and prose, you have also published exceptional anthologies. What’s the story behind these publications?

My fifth and hopefully last anthology is titled Ο ΤΑΧΥΔΡΟΜΟΣ ΦΕΡΝΕΙ ΓΡΑΜΑΤΑ ΠΟΙΗΜΑΤΑ [The Mailman Brings Letters Poems]. It is published by the Hellenic Post and will be presented at the Old Parliament House on World Poetry Day (21 March 2017) with the participation of forty poets included in the anthology, starting from the “generation of the 1950s” (Yannis Dallas, Titos Patrikios) and moving onwards to younger ones.

Anthologies have been a break for me, offering a different insight into the ongoing preoccupation and turmoil that poetry entails. Three out of my fives anthologies have been a pretext to speak as a writer in a different guise. Let me explain. Το Μελάνι Φωνάζει [The Ink Shouts] (for the Polytechnic Uprising in 1973), Η Αρχαία Πατρίδα των Ποιημάτων [The Ancient Country of Poems] (on ancient Greece), and 1821 in Greek Poetry are anthologies accompanied by long texts either as introductions or postscripts that echo my personal view on these issues.

“What the reader realizes right from the start is that Ilias Gris, as well as all the poets of that generation, carries the burden of causes betrayed, as the experience was imprinted on the poetry of the first and second post-war generations”, to use Marios Michailidis’ words. Can we talk about a “generation of the 1970s” in poetry? If so, what are its common elements?

This “burden of causes betrayed” that the reader perceives as an element of my poetry – so aptly put by Marios Michailidis – is the most distinctive aspect of modern Greek poetry in its entirety. Which poetic generation from the interwar period onwards hasn’t put forward this “burden of betrayal” in its collective work? Yet, if you come to think of it, the deepest significance of betrayal involves at the same time a wake-up call for people.

Poetry is the vigilant guard of human conscience. Forty to forty five years since its first appearance, my generation has become established as the “generation of the 1970s” in Greek literature. Its important work as well as the individual work of each poet can only be evaluated by the only impartial judge, which is time! In any case, it won’t be an easy task as it is the most diverse generation where a variety of voices with many different features converge.

“The country’s deserted streets, roads of subordination with vipers whistling and poetry the only one still standing…” What is the role poetry is called to play in times of crisis?

You cited a verse written thirty five years ago! It can be scary when you realize how painfully timely poetry could be. This, in turn, shows the role poetry plays in times of dynamic upheaval and unrest. Poetry that aspires to be genuine, acts either as a consolation or as a secret blare for unsettling consciences. 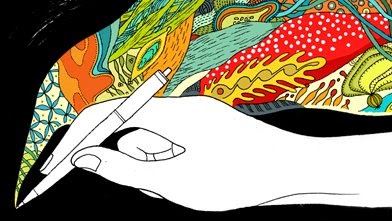 Could the Greek crisis become a source of inspiration for younger Greek poets? If so, based upon which poetic and aesthetic criteria? Could a multi-faceted socio-economic phenomenon trigger a poetic ‘cosmogony’ and possibly a ‘new generation’ in poetry?

Aesthetic criteria in poetry have always formed the basis for the primary stake at hand: aesthetic fulfillment! This is certainly a heavy burden, especially for younger poets. To the extent they can avoid being tempted by the ease of imitating what represents a predominant poetic style or trend, then there is ground for hope; even though there is no reason why a new poetic generation should be established every time. Setting up generations is mostly a vehicle for scholars and academics. Who is in a position to predict “cosmogonies”? Following the “cosmogony” of Modernism during the first decade of the 20th century, whose birth was polyvalent and indeed a breakthrough, I see nothing similar happening in the immediate future. In this context, let me conclude by posing a question which is an answer: To which generation did Cavafy belong?