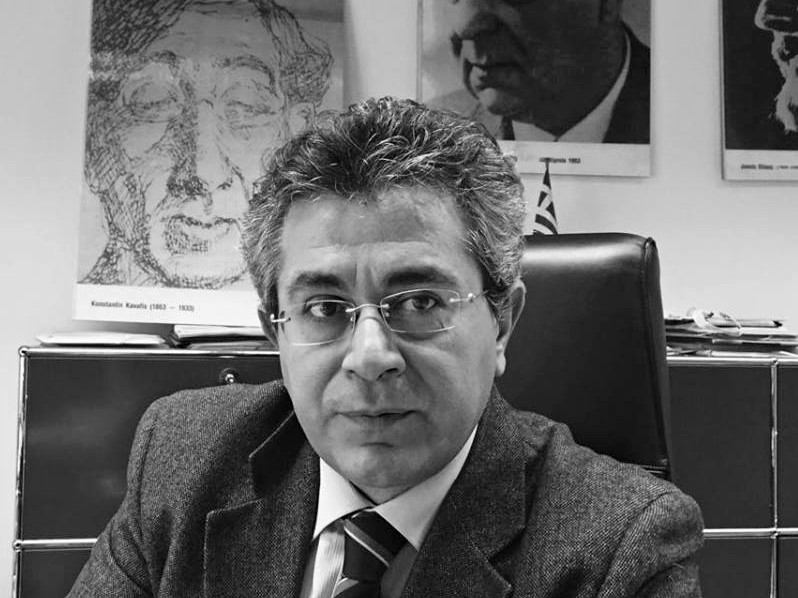 Nikolaos Vlahakis is a Greek poet whose works have been translated into English, Spanish, French, Bulgarian and German. He has also penned articles on literature, international politics and social theory, which have also been published in newspapers and magazines, in Greece and abroad. He was a guest poet at the 27th International Poetry Festival in Medellin, Colombia; excerpts from his first poem collection have been translated into English and Bulgarian and published in the magazine Literaturni Balkani, while some of his poems were recently published in the Franco-Canadian magazine Le Crachoir de Flaubert and in Variations, the literary journal of the University of Zurich.

Vlahakis was born in Crete in 1967 and studied philosophy at the University of Sofia, Bulgaria. He also studied public administration at the National School of Public Administration in Athens and obtained an MA in foreign relations and strategic studies at the European Center for International and Strategic Research in Brussels. He has served as Press and Communication Counsellor in various Greek embassies. He has released three poem collections: Tractates from a multinational force or Terra incognita (2002), The Bridge of the Eagles (2011), About turbulence and shadow - Idola tribus (2016), all by Gavrielides Editions.

Nikolaos Vlahakis spoke to Greek News Agenda* about his sources of inspiration, the poets that have influenced his work and his thoughts on the poetry in the digital era.

You have already published three poem collections and many of your poems are considered to be influenced by the great Greek poet Cavafy. Do you have other sources of inspiration?

Usually we have different influences, even those who do not write, but are just readers of poetry. It is true that some critics actually, have seen an influence of Cavafy, mainly in my second poetic collection The Bridge of the Eagles. Some others have traced the influence of Odysseas Elytis or, in general, the so-called generation of the 30s. And this is partially correct, although I can say that my concern is to look beyond the eyes of this generation. Several times I turned to the classic writers of Modern Greek poetry, from Solomos to Palamas, Cavafy, Seferis, Elytis, Ritsos, etc. This was inevitable in my effort to create a more personal style. In this effort I also had the desire to talk with these top poets. In the process, however, one should discover his own expression.

The same happens regarding the foreign influences, and especially in the languages ​​you mentioned: Pablo Neruda and Lorca were the ones that attracted me the most in Spanish poetry, while French symbolism is in my opinion an unsurpassed model of poetry. Once I was passionate about Mallarme, Paul-MarieVerlaine as well as Arthur Rimbaud. As for the English speaking poets, I can confess that when I discovered Allen Ginsberg this was the reason to start writing poetry again after a long period I had interrupted. His poetry gave me the incentive to restart by doing some translations exercises. Later, I was also fascinated by William ButlerYeats. But the encounter with many other poets from different countries enriched my poetic course. The point, of course, is to transform all these different influences into your own “poetic idiom”, and this can only be done in your own "poetic workshop".

Death;
like a cleft in a rock
vigilant trap

Death;
sisterhood of silences
bridal glow-worms
and grasshoppers with instincts of a killer
salted fields
and abandoned machine gun platforms

Death;
that I haven’t had enough of you yet
and now and tomorrow
the grand resignations.

(Translated from the Greek by Katerina Anghelaki-Rooke)

What was your first contact with poetry? What internal need prompted you to express yourself poetically and which are the sources of your inspiration?

My flair for writing, especially poetry, was developed at an early age. My family’s tradition is that my uncle, my mother's brother, published some very remarkable poem collections which he offered to us. In the island of Crete, where I was living at that time, I participated in some local literary contests at the age of 16-17, where I was awarded and my work was published. This was a strong motivation that maintained my interest in poetry. I started writing poetry again after a long period, mainly after my student years, but during my student years I was reading a lot of prose and novels. In Crete, however, where I grew up, the live folk tradition that derives from Erotokritos and continues with the rhyming couplets in form of a narrative or dialogue (mantinades), makes us all think like poets!

My inspiration derives from an attempt to express philosophical reflection in poetic form. An attempt to combine philosophy with the condensed form of poetry.

Due to your occupation as a Press and Communication Councellor at the General Secretariat for Media and Communication, you have lived many years abroad. Did you miss Greece all these years?

Yes and no. As my daily routine and my work was directly interwoven with the political and other actuality of the country, but also as a part of the country's public administration abroad, I would not say that I was missing Greece. Greece was constantly present in my mind. What I was missing was perhaps the landscape, my people, and my memories. This nostalgia, however, is a creative motivation for poetry.

What is the focal point of your poetry collections?

I consider my poetic work, published by Gavrielides Publications, as a trilogy, a repetitive reflection in Greek history, within space and time, as well as in Balkans and European history in general. Besides, my books are connected with the cities where I wrote them, when I served as a Press and Communication Counsellor at several embassies of Greece: I started writing my first collection in Tirana and I finished it in Brussels; the second in Sofia and the third in Budapest. They are in some way poetic chronicles of these cities, or that is how I would like to characterise them.

The first collection (Tractates of a Multinational Force or Terra Incognita) is in reference with a conceptualisation of the Balkans as a tough historical terrain which internalises or even imprisons objectivity into the inner sphere of the idea of an unknown land (Terra incognita is the subtitle). The second collection is a metaphor of the eternal returning in Time, through the gates of a bridge guarded by four imaginary eagles (The Bridge of the Eagles), which compose the chorus, whereas in the centre there is digression calendar of everyday life. I can say that it is a metaphysical view of history. In the third attempt, I make a poetic anatomy of our atavistic stereotypes, which is what the English philosopher Francis Bacon called "Idola tribus". Inevitably, this brings me to a self-conscious relationship with Greece and my homeland, Crete. In this sense, I see my work as a kind of political poetry, though not obvious at first glance.

Do you think that the digital revolution has affected poetic creation and, if so, in which direction?

Not so decisively, but I believe that it will influence every aspect of art and expression. And I do not mean only the way of circulation, publication and dissemination of poetic creation. It will impact it structurally. Let me give you an example: the haiku started to become a form of poetry with which more and more poets are engaged all over the world, going farther than the Japanese tradition which created them. This happens due to the fact that nowadays with a simple tweet you can spread your daily haiku. On the other hand this fact determines the way in which poetry is now written, with whatever impact this has, negative or positive. Poetry reverts to the forefront as Internet requires abridged communication and synthesis, as a sort of contemporary art form. Last year, I participated in the 27th International Festival in Medellin, Colombia, where I realised that modern trends in international poetry are combining multi-media, video art and performing arts in general.

Do you think that the recent economic crisis has influenced Greek poetry?

I think yes. The new generation has started to create the art of this period in every field. It is a collective experience that strongly defines the way we now detect our horizons. It is characteristic that when I was leaving Berlin, where I was serving recently, a German poet suggested me to compose together an "Anthology of Greek-German Poetry of the Crisis". Besides, it will be the mark that separates two periods of the recent history of Greece: The period of crisis from the period after it.