Reading Greece | Dr. Kostas Gouliamos on Mikis Theodorakis and the “Dialectics of Harmony” 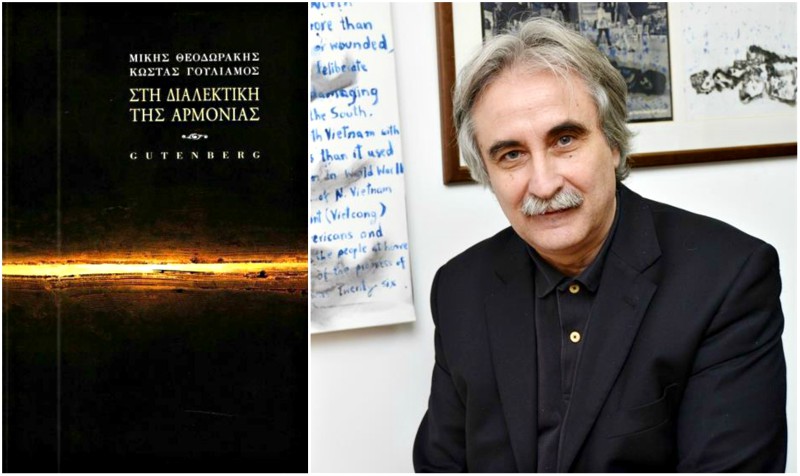 Dr. Gouliamos has also been appointed Member to the Steering Committee for Higher Education & Research (CDED) of the Council of Europe in Strasbourg/France. According to the University of Toronto Quarterly his research work -along with Professor William Anselmi- qualifies him to “the Frankfurt School’s epigones”. He introduced (together with A. Theocharous) the concept of “marketing of war” and later he has expanded the concept in his research work.

Part of his research work has been listed in the Volume of the International Bibliography of the Social Sciences (IBSS) produced by the London School of Economics & Political Science, translated into several languages (French, Spanish, Slovak, Chinese, English, Italian), and included in the curricula of some of the best fifty universities of the world.

He has published several books dealing with philosophical and political issues. Dr. Gouliamos speaks to Greek News Agenda* about his book On the dialectics of harmony, which is a dialogue with legendary Greek composer Mikis Theodorakis.

Why did you choose to speak with major composer Mikis Theodorakis? What was your intention when writing this book?

Following a systematic study of Theodorakis’ body of work, and having shared a long conversation with him several years ago, I suggested to our great composer that we should create a reflective, multiple-level rendering of the "Universal Harmony" law he had formulated.This resulted in the book we co-authored, On the dialectics of harmony, which was published by Gutenberg and elegantly designed by Yannis Mamais.

Reflecting does not however concern a simple recollection of events but the revisiting of history through a critically analytical approach of cultural, political and social actions, leading to a redefinition and advocacy of Harmony on a universal, global and human level.

What in your estimation does Mikis Theodorakis stand for in terms of Greek cultural production?

Mikis Theodorakis is among the most significant personalities of Modern Greek culture, he is history incarnate. At the same time, he is also a universal personality, globally renowned and acknowledged. He has experienced peoples’ history; “many cities of men he saw and learned their minds” (The Odyssey). He is a globetrotter par excellence, a composer of high aesthetic and social level. A 20th century musical genius and one of the very few artists of our times who possess the "universality" of polymathy. A veritable Homo Universalis, defined by his never-ending concerns and ongoing struggles for humanity and justice.
His anxious quest for Greek roots as well as for humanity resulted in his creating a body of work of enormous intellectual and scholarly effort, imagination and inspiration. Through his works and actions emerges the lively, vigorous and ever-wandering figure of Mikis, who has extended the cultural vision of modern Greece and the name of the country around the world.

You note in your book that “Theodorakis’s thoughts seek the meaning of harmony and uniqueness at the core of Pythagorean dialectics”. Would you elaborate on that?

These thoughts encompass various fields of knowledge, as well as intellectual and cultural contemplations that, mutatis mutandis, broaden conceptual changes by linking the discourse and movement of Pythagorean dialectics to dialectical materialism. This coalescence in Theodorakis’ thought is expressed in tandem with the isomorphism, the homomorphism of musical systems and aesthetic elements or historical interdependencies and social relations, all of which must serve harmony as a philosophical framework but also uniqueness as a movement of mental and spiritual reflection.Harmony broadens the spectrum of mental processes and reveals the personality, the uniqueness of the individual. In any case, Pythagorean dialectics are for Theodorakis an ontological field that comprehends universal harmony.I would argue that he treats it not only as a cosmological but as dynamic dimension, with social and cultural repercussions. From this point of view, harmony - like the uniqueness he proposes - is possible as an "open" dialectic; as a concept of thinking and “doing well”.

Mikis Theodorakis points out that people’s educational levels are getting lower and that leisure time is on the decline, leading to the gradual loss of people’s uniqueness. Do you think that younger generations will be more capable of leading the world to a form of "neo-Enlightenment"?

One of the major problems of modern and post-modern societies is the production and diffusion of half-education (Adorno`s Theorie der Halbbildung), which I think is largely associated with the shortage of leisure time. We notice the increasing inability of making creative use of free time, especially in young people. People in our time can no longer develop their creative imagination and dynamism which they presumably possess. The so-called "digital enlightenment" intensifies the problem of aestheticization of political discourse and cultural expression. The ‘society of the spectacle’ (re)produces technical standardization, instrumental reason and superficial communication, thus nurturing the emergence of narcissistic personalities. Goffman has pointed out that “human beings are creatures of variable impulse with moods and energies which change from one moment to the next”. In any case, the narcissistic epidemic is, inter alia, a congenital disorder of the bureaucratisation of the spirit.

We have ended up speaking a trite language, infested with pleasing and entertaining elements that reign over the public sphere but also the biota. Is it any wonder that one of the major issues of our times is the semantic reversal and the misreading of the meaning of words?In a world of declining expectations and the omnipresence of the alienated spirit, we eventually have to fight alongside young people for the deepening and the quality of democracy, in order to break free from the fundamentalist designs of all forms of neoliberalism. Moreover, we need a process of self-reflection capable of eliminating the endless (self) destruction of Enlightenment, before we achieve what you call a "neo-Enlightenment".

A final question: You have already published several poetry collections. What was the inner need that motivated you to express yourself through poetry?

My anxious desire to submerge myself into the multipolar neurons of speech and to bring to light morphological, functional, even hidden as well as contradictory aspects of reality is a fundamental stimulus. Apart from that, the zeal for self-reflection, and for an aesthetic experimentation with speech, remind me that I have no choice but to express myself and to variously connect this expression with my actions and, consequently, with my conscience. It is within this context that I also place my poetic testimonies.

Read also via Greek News Agenda: Filming Greece | “Dance Fight Love Die. With Mikis On the Road": an idiosyncratic portrait of an idiosyncratic artist; Reading Greece | Writer Elias Kafaoglou: “The democratisation of desires is what I’d like to hold on to from the ‘digital age’”