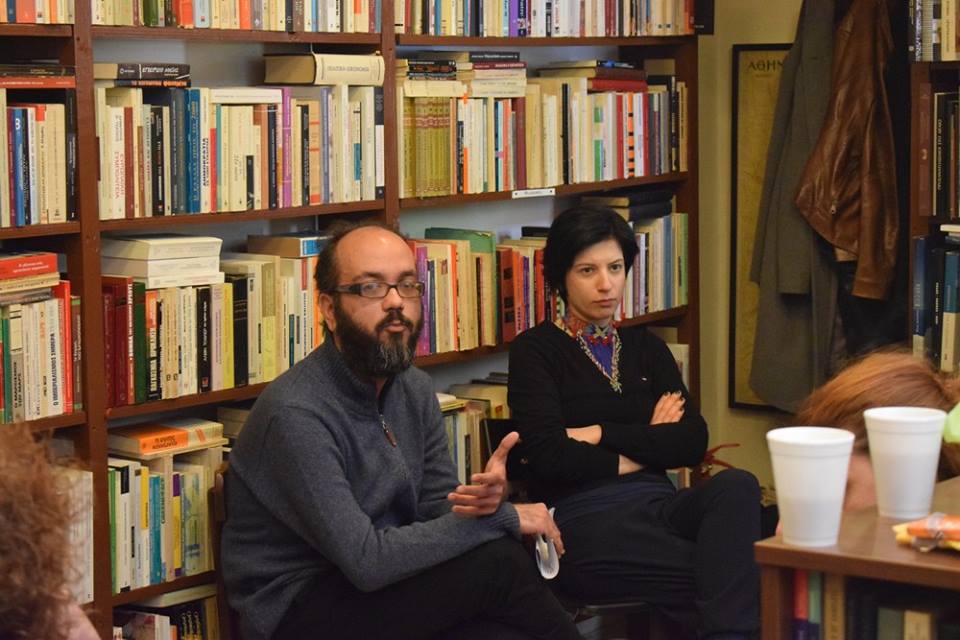 Michalis Papantonopoulos spoke to Reading Greece* about the main themes his poetry delves into, noting that every time, he tries to “compose a puzzle of the being at a historical time”, and that “there are repetitive images and words coming back, yet in an unexpected syntax or by distorting grammatical rules”, “an attempt towards linguistic freedom”.

Asked about Kovaltio Editions, which he founded together with Labriana Oikonomou in 2016, he comments that “Kovaltio Editions is an act of self-determination vis-à-vis our literature aesthetics”. He concludes that “in difficult times, culture, in various forms, is to be affected by the bureaucratic folly of the state. If this is the case, the state would better withdraw, so that the book market may self-requlate and operate on its own. Contrary to this, the extent of collapse may crush any defense”.

You have published five poetry collections. Which are the main themes your poetry touches upon? Are there recurrent points of reference in your writings?

Every time, I try to compose a puzzle of the being at a historical time. Of course Every book has elements in common: specters that are raging; pieces lost and pieces found along the way; new combinations in familiar molds. The puzzle is either finished or abandoned and taken to pieces. In any case, the poet reinvents the way to make thing happen.

In this sense, there are repetitive images and words coming back, yet in an unexpected syntax or by distorting grammatical rules: as if they exist in isolation in personalized linguistic construct, where they can acquire unusual meaninings or differentiated function compared to their use in texts outside the construct. It is an attempt towards linguistic freedom.

You have translated major writers such as Trakl, Poe, Rilke, Yeats, Wilde among others. Which are the main challenges a translator has to face and what constitute your primary translation goal?

In the end, it is always the text itself that is intriguing: to creatively transcribe the text is challenging. The translator has a task: to harness, both fiercely and creatively, the voice, the story and the passions of the text; not the writer’s. As a matter of fact, translation has a purpose: to creatively find the Greek equivalents to the original text; the aesthetics of speech. It is there that the limits, whatever is gained, whatever is lost, are tested. Far more than this, there is also a gift: the balance that translation offers. In a sense I feel part of the ‘immortality’ of the texts. Mortality is inherent to the art of translation. As a consequence, translation is a valuable reminder of artistic immortality.

What is the relationship of poetry to the world it inhabits? Can literature be used to create a new narrative about Greece?

The words of Abidin, when the Turkish poet Orhan Veli Kanik ‘was trying’ to understand the social importance of mustard, come to mind: “One can’t/ Live/ Without mustard/ Abidin was saying/ the same thing/ the other day/ to those/ who understand/ Deeper Things./ I know I don’t need to say this-but/ May God let no one/ be without mustard”. Literature is part of our narrative about the world: the same way as household aesthetics, pivotal events in the ‘showcase’, the ‘fitting rooms’ and ‘warehouses’ of political life and History, exceptional circumstances and suffocating habits. After all, literature is not the outcome of supernatural, but the attempt to form a narrative about people risking (for) the bliss.

In 2016, together with Labriana Oikonomou, you founded ‘Κοβάλτιο’ [Kovaltio Editions]. How did you decide to embark on such a publishing venture amidst the crisis? What is to be expected from Κοβάλτιοin 2019?

An era has its own difficulties. This shall not prevent people from fulfilling their wishes. We shall not conform to the pessimistic ‘normality’ imposed by economic crisis. Kovaltio Editions isan act of self-determination vis-à-vis our literature aesthetics.

As far as concerns forthcoming publications, in 2019, the following books are to be published:: The Philosophy of Dress and Furniture with essays by Oscal Wilde and Edgar Allan Poe respectively, translated by Labriana Oikonomou; a selection of short stories by the Russian writer Daniil Kharms translated by Giorgos Blanas titled Falling old ladies and other stories; Tales for the Underworld by Hans Fallada, translated by Angeliki Korre. 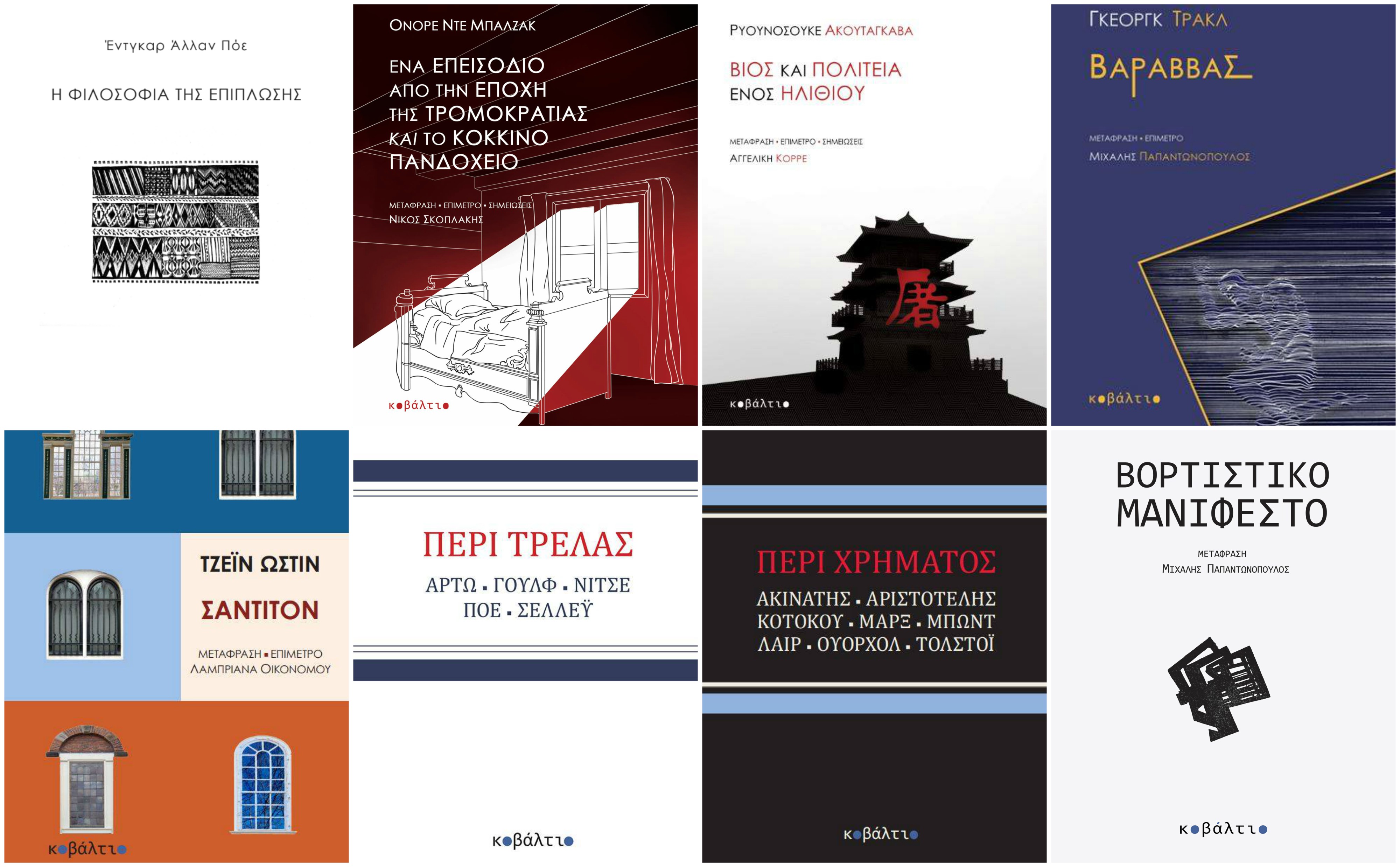 The crisis has deeply disturbed the publishing market: the need for financial liquidity was transformed to ‘an aesthetics’ condition’. Yet, quite significant works continue to be published, new editions start business, the level of translated works into Greek is, for the most part, highly satisfactory, while typography standards remain high.

There is a space to creatively think and work as editors. Being active participants in the book market is an ongoing process that comprises elements such as publishing vision, typographic perception, lust for the text.

To a considerable extent, the state book policy should, at least, reduce the number of economic ‘absurdities’, in many business sectors as well, while they affect the citizen. Ill practices in the book market are intensified by countermeasures. There is a dominant trend in the book market; the editors publish books paid by the author to ensure volatility; furthermore, the editors seek cheap or even free collaborations. Thus, people unfamiliar with book production (notably specialists employed in other, well-paid business sectors)  enter almost unthinkingly literature aesthetics and publications standards. Consequently, the reader may get a book of poor quality.

In difficult times, culture, in various forms, is to be affected by the bureaucratic folly of the state. If this is the case, the state would better withdraw, so that the book market may self-requlate and operate on its own. Contrary to this, the extent of collapse may crush any defense.