Reading Greece: Petros Golitsis on the Interrelation between Poetry and Painting and the Political Nature of Art

Petros Golitsis was born in Thessaloniki in 1978. He studied economics at the University of Thessaloniki, at Birkbeck College of the University of London and at the University of Sheffield. He is the author of four volumes of verse: Paper’s memory (2009), The abrading of time (2013), The flesh of the temporary (Gavrielides Books, 2015) and Bursting with meat (Thraca Books, 2017). His poems have been translated into English, German, Italian, Spanish, Finnish, Romanian, Bulgarian, Portuguese and Serbo-Croatian. 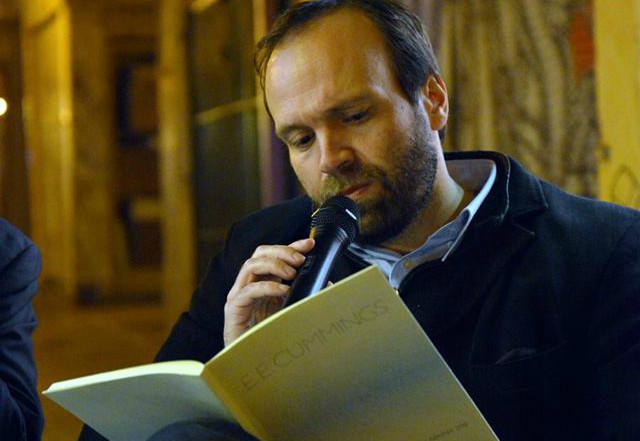 Petros Golitsis spoke to Reading Greece* about the main themes his poetry delves into, noting the “issues in his poetry and his poetic obsessions relate to ‘from where’ and ‘as what’ he is talking”, and on the purpose that language plays in his writings explaining that he perceives and works on “language as a plastic matter, in the artistic sense of the term”, “as a potentially explosive matter” in this respect.

He also comments on the way the present interweaves with the past and the future in his poetry, “within the framework of an inextricable ontological short-circuiting”, as well as on the interrelation between poetry and painting, “using the elements of nature to give light and movement in open spaces”. As for the relation of poetry to the world it inhabits, he notes that “everything in art is politics”. “A case in point is our stance, both in the heat of the moment and in retrospect, vis-à-vis the shocking event of the fire that burned Notre-Dame in Paris in 15 April; a reaction which, cultural or religious though it may seem, is political in its essence”.

You have published four poetry collections so far. Which are the main themes your poetry delves into? Are there recurrent points of reference in your writings?

Τhe issues in my poetry and my poetic obsessions relate to “from where” and “as what” Ι am talking (and this is set each time anew, without however parting with my dominant predisposition). As a non-flora species – let us assume 94% as a homo sapiens and 6% as a neanderthal – without bearing the whole or participating fully identified with the chemical and other elements around me and abiding by the natural laws over which I exert no control. Thus, partly discernible, I cross the world as an event and I appear upon and not within the event – as a digested part of it. And that’s where the poem acts as a leverage, which sometimes multiplies this unfamiliarity, while at others it makes it possible to reconcile and co-move with the world’s unfamiliar, chaotic and monstrous.

“What makes Petros Golitsis a major poet is the way his words invade a deeply-rooted image of the world, just to turn it upside out”. What purpose does language serve in your poetry?

I perceive and work on language as a plastic matter, in the artistic sense of the term. And, let me add, as a potentially explosive matter. My poem ‘Reality’ from The flesh of the temporary comes to mind: “I placed a dynamite between her legs / and set fire to it. / “You whore of a reality,” I uttered, / “I’ll blow you to bits!” and I did so. / She stared at me – as if sad – / but she put herself together again / nothing really changed / as if to say: “What if I was amputated? / You first were blown to pieces between my legs. / What if I was scattered – for a while – you hermaphrodite? / With my entire body will I again continue”.

These words ("What makes me a major poet") belong to the very good poet Giorgos Lillis. I appreciate his poetry, I have read him (I also met him once following his review) and I am honored by his words; yet our attention should be directed not towards the poet but rather towards the poem and its verses as you aptly note. So let me focus on what follows: “his words invade a deeply-rooted image of the world, just to turn it upside out”. By pulling the cosmic rug under our feet. ”Don’t think. Look!”.

How does the present interweave with the past and the future in your poetry?

One of my verses fully suits the case: “with a boulder (a big stone) I’ll bring down the sky’s entire showcase”, that is as an acceleration, as a call or as an act of breaking the deadlock and thus as a conclusive solution of the mystery (which of course remains unattainable with our means and «such» a brain).  Of course, the partly procedural use of the world as an event could potentially lead to (my) not wanting any more to be part of the world as a movement, and thus to the acceptance of complete fusion and to the subsequent definite and irreversible disintegration/defeat of (my) being in the ‘zone’ of absolute immobility; where all relationships, both potential and actual, are dismantled. That’s where the fair and childlike and skyish (‘sky-blue’) light of Vizyinos falls down and – through a temporary stay in the nuthouse, in ‘such’ an entryway – crushes. What force brings into existence and calls a halt to the flowing, floating and deferred play both within and upon light?

Everyone’s volition and definitely mine – in this case – towards the entirety and complexity of the world as an event, appears and should be prepared, in practice, for a momentary revelation as well as for the conclusive disappearance of the being, the form and the conscience, or for its repetition and re-appearance within the world of movement; within the framework of an inextricable ontological short-circuiting. Such is my relationship with the past, the present and the future.

To use Dimos Chlopsioudis’ words, “in a dynamic expressiveness that focuses on the figurative use of speech, [Golitsis]  uses the elements of nature to give light and movement in open spaces”.  Where does the poet meet the painter in your work?

In the momentum of the previous question – Ι will come to painting – in case the supernal was love (what a noble conception and gesture the preeminence of love, and what act of ultimate despair and deep consciousness of the dead end do the embodiment of the divine and the abnormal, absolute absurdity of resurrection constitute), so in case the supernal was or supposedly is love, then God as a punisher or judge does not exist. An anthropocentric god – always in the context of a passage – might have been concentrating on our aforementioned volition, while a ‘gravitational’, i.e. physicochemical – let’s say – hyper-entity (or should we say hypo-) would be regularizing our momentary deviation. Such is the relation of my poetry with painting, and most importantly such is my predisposition when I attempt to "use the elements of nature to give light and movement in open spaces". Ontological, geological, cosmological, those open spaces.

What is the relationship of poetry to the world it inhabits? Can poetry act as a political paradigm? Is it in the capacity of poetry to be ‘politically militant’?

Stalin’s thick fingers, the poet wrote about, lead to rough socialistic realisms. At the opposite side, on the other side of the Atlantic, Pollock is based upon and institutionally normalized within the framework of other political and state priorities, emergencies and rearrangements. Everything in art is politics. Just as ‘innocence is not enough to plead not guilty’, an art that appears not to be politically militant, de facto is; given that it both directly and indirectly defends a political stance or a number of varying affiliations. A case in point is our stance, both in the heat of the moment and in retrospect, vis-à-vis the shocking event of the fire that burned Notre-Dame in Paris in 15 April; a reaction which, cultural or religious though it may seem, is political in its essence.

How would you comment on current literary and artistic production in Greece? Which are the prospects of the new generation of Greek writers?

Currently, I would rather play and draw with a three-year old monkey or accompany its parent, who has the same age as me and has already surpassed – in the majority of the species – the expected age of death at 40, than hang out with living poets or artists. In other words, I feel a bit tired of my ‘trade’, which, however, I continue to review, both in terms of essay and poetry, acting above all as a poet. Or else, we have all contributed in various ways and means to increase his/her poetic (artistic) capital adequacy. From then onwards, he/she seems to manage the supply and demand of his/her titles, works and character on the market and the Internet quite successfully. The target price of his/her literary-artistic stock value is still positive. Recommendation: buy, or at least hold, shares, urine or liquids. And, then, of course, split and bail in, our case is definitely not a bail out one. Are we playing now? Thank you.