Reading Greece: Katerina Anghelaki-Rooke on Poetry as an Endless Source of Revival and the Creation of a New Poetic “Cosmogony”

One of the most emblematic lyric voices of post-war poetry, Katerina Anghelaki-Rooke was born in Athens in 1939. She completed university studies in Athens (Greece), Nice (France) and Geneva (Switzerland). She holds a degree from the School of Translators and Interpreters (English, French, Russian). Her first published work, in 1956, appeared in the literary magazine “Kainourgia Epochi” (New Era). Subsequent to that, she has penned articles and essays on Greek poetry as well as translated poems that have been published in numerous magazines in Greece and abroad. Additionally, approximately 20 of her poetry collections have been circulated. In 1962 she won the Prix Hensch, Geneva’s 1st Prize for Poetry. In 1985 she won 2nd Greek National Poetry Award. 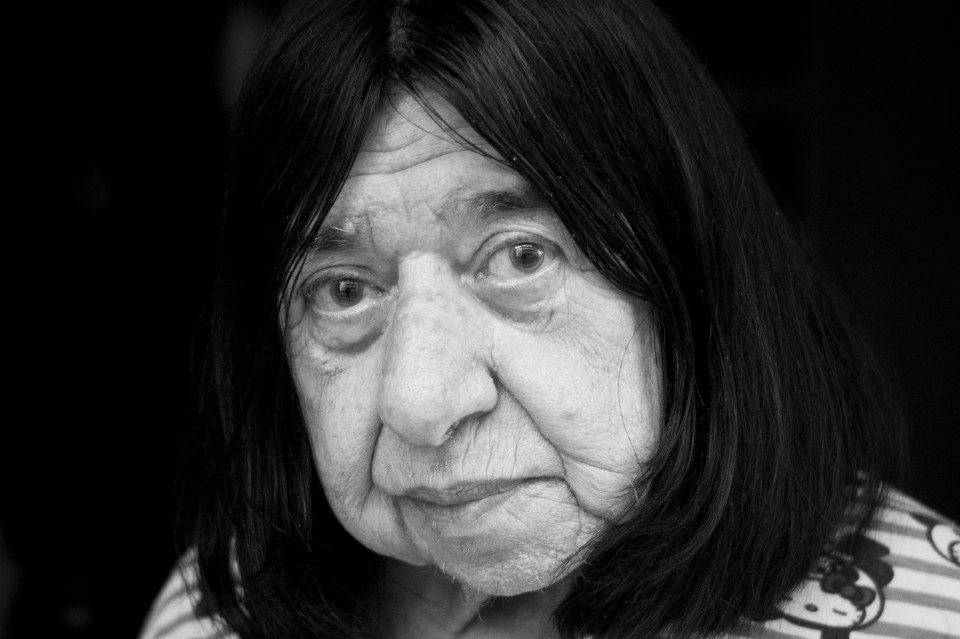 She has also lectured and read poems at U.S. and Canadian universities (Harvard, Cornell, Dartmouth, State University of N.Y., Princeton, Columbia, to name but a few). In 2000 she was the recipient of the Kostas and Eleni Ourani Award (literary distinction by the Academy of Athens). Her works have been translated into more than ten languages and her poems can be found in various anthologies worldwide.

Katerina Anghelaki-Rooke spoke to Reading Greece* about what has changed and what has remained the same in her poetry more than forty years since her first poetry book, as well as on the role language plays in her writings. She explains that “the oppressive times turn to prose to express the negative horizons” and adds that “youth that is no longer threatened, hopes and returns to poetry to express hope and plans, hesitating and taking one step at a time”.

She comments that “poetry has always played its unique role in human history by creating new – political, religious, ethnical – values or by defending even fighting for the old ones” and concludes that “poetry is an endless source of revival, even when reality had totally forgotten its existence, which makes me believe that it can rise again”. “Not as a victim to be exploited by forces of violence but maybe by creating a new poetic “cosmogony” made out of the totally antipoetic elements of our time”.

From Μαγδαληνή το μεγάλο θηλαστικό in 1974 to Με άλλο βλέμμα more than forty years later, what has changed and what has remained the same in your poetry? Are there recurrent points of reference in your writings? What role does language play in your writings?

The poetry collection With another glance came to life precisely because I was feeling that everything had changed: the world around me, the feeling of the world inside me. I needed another language to express this new reality that I felt as a natural development in this life. What elements from the previous reality have gone through time, I have no way to check.

Language is everything not only in my writing. It is as if you are asking a human being: what role does your body play in your life? Of course every poet is driven by his own ideas, phantasies, obsessions. So he may give a different answer.

What drove you to poetry and what still remains your driving force?

I don’t know. I just can’t remember a time, even childhood, when I wasn’t reciting a poem and started writing it when I was 15 years old.  Of course this reality I owe it to my family, absolutely cultivated people and of course to the extreme luck to have as a god-father Nikos Kazantzakis who really believed in me and who for me was just god!

My driving force now is covered by a cloud. I don’t know if there is any left and if it is still driving me. 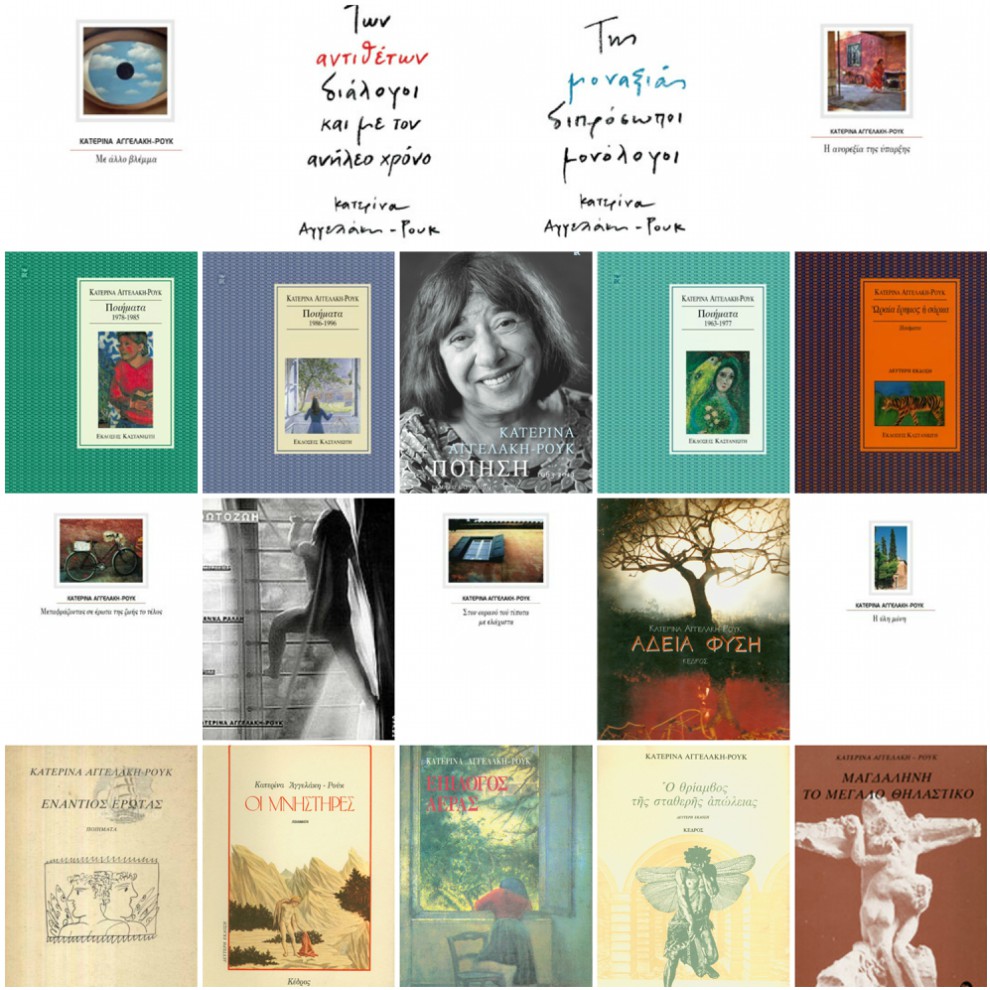 “The oppressive time inspires, always through its prose, poems of essence that make us approach the negative, the difficult elements of our lives: sorrow, silence, survival and of course death”. Tell us more.

I was saying that the oppressive times turn to prose to express the negative horizons. Many years later – dictatorship etc – I think that of course in those years prose was absolutely necessary to make sure that all the proposals for desperate solutions were understood and followed. Now, prose is of the natural world and it is part of the new poetry world where the most crazy phantasies are allowed since science has the future of life in its hands. And youth that is no longer threatened, hopes and returns to poetry to express hope and plans, hesitating and taking one step at a time.

You are regarded as one of the most prominent poets of the so-called generation of the 1970s. What makes this generation different from what preceded and what followed?

What makes this generation, the generation of the ‘70s is that Greece experienced a second civil war, 30 years from the first one, a much worse situation because the first one was a crucial point of the history of the whole western world which was divided into two: communists and fascists. Our second civil war was a division between who was cooperating with the Hounda and who was not. I cannot even breathe when I remember those days.

I don’t know if translation can be unethical because I know, history says, a lot of crime has hit this earth in the name of ethos – morality. But I know that translating can be criminal either because of ignorance of the language we pretend to know, or because we are working in a very dangerous spot where all the criminal acts can be transfigured into a problem with the translation.

How would you comment on current literary and artistic projects in the era of online communication? Could art be used to imagine what could be radically different realities?

We are going through the deepest earthquake – maybe – that humanity has experienced, but because it is so deep nobody can feel it. Nobody can even imagine a life where the brain will be totally useless, that is, the whole mechanism of thinking, realizing the conclusion of thought, analyzing it, inventing, as a result, a new world. Now, you press a button and you have all the answers of all the questions that you had not even imagined to ask.

The other negative side of our life today is the omnipotence of the image: from following tragic events as they happen, to organizing what will what will come next. As for the human being, it is much more the way it looks than what it says. And this development is particularly in favour of women, who, always, naturally, look after their appearance and now they can simultaneously express their thought.

What is the relationship of poetry to the world it inhabits? Can poetry act as a political paradigm? What can it mean for poetry to be political, or apolitical, in times of social and economic crisis?

As we said, everything that has to do with human intelligence and its exclusive role in human life, is going through – to put it mildly – a crisis. Poetry, of course, has always played its unique role in human history by creating new – political, religious, ethnical – values or by defending even fighting for the old ones. My faith that poetry is an endless source of revival, even when reality had totally forgotten its existence, makes me believe that it can rise again.

Could a multi-faceted socio-economic phenomenon, like the current socio-economic crisis, trigger a poetic ‘cosmogony’ and possibly a ‘new generation’ in poetry? If so, based upon which poetic and aesthetic criteria?

Yes, it can rise again. Not as a victim to be exploited by forces of violence but maybe by creating a new poetic “cosmogony” made out of the totally antipoetic elements of our time. Poetry connects the past experience and the imagination of the future, as one. As for the poetic and aesthetic criteria, they haven’t been invented yet.