Reading Greece: Aristea Papalexandrou on Poetry as a Creative Act

Aristea Papalexandrou was born in Hamburg in 1970. She has published five books of poetry: Dio onira prin (Two Dreams Ago, 2000), Allote allou (Once, Elsewhere, 2004), Odika ptina (Songbirds, 2008), Ypogeios (Underground, 2012), Mas propserna (It's Overtaking Us, 2015). She has studied music and Medieval and Modern Greek Literature. She works as an editor. For her last book, It’s Overtaking Us, she was honored by the Academy of Athens, in December 2017. 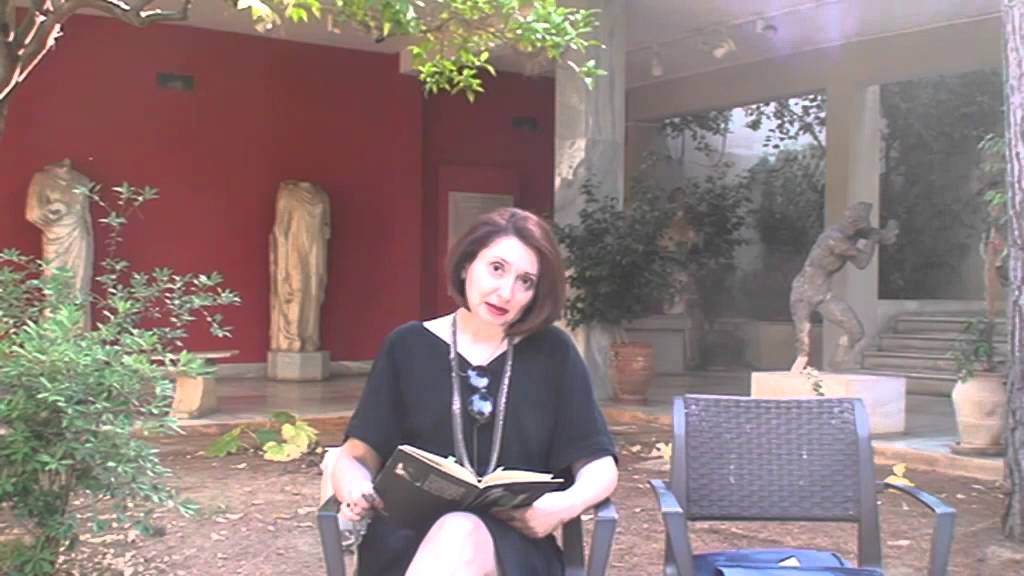 Aristea Papalexandrou spoke to Reading Greece* about what has changed and what has remained the same since her first poetry collection in 2000, noting that she has, "during all those years, continued to write what is basically a single poem", adding that her poetry will continue to be "in a state of prolonged 'suspension'", just as her life is. As for the role language plays in her poetry, she explains that "during the writing process there are elusive incidents and inexplicable coincidences and that in the end there is no formula for the creative act of poetry".

Asked about the extraordinary burgeoning of poetry in recent years, she comments that "there has been an intense need for expression in all ages and periods. What's happening now is more than likely a reaction to the difficult times we live in". She concludes that "every period has its difficulties which can in a variety of ways produce a vital and even ground-breaking new poetic generation", noting that "we all remain bewildered by the mystery of art".

From Two Dreams Ago in 2000 to It’s Overtaking Us in 2015. what has changed and what has remained the same in your poetry? Are there recurrent points of reference in your writings?

I would say that I have, during all those years, continued to write what is basically a single poem. But while writing it I am myself changing…as we are all obliged to change…so there is no way that I can escape making changes to that poem…writing it is an evolving act all its own. Naturally enough, no one wants to end up copying himself… so in the final analysis, and with the passage of time, there is an ongoing narration incorporating the many views woven into the work… still incomplete and as such reach new tentative conclusions each time the “site” is revisited. Speaking for myself, the only thing I can say with any certainty is that my poetry will continue to be in a state of prolonged…”suspension”…just as my life is, and will remain, in a similar state…

In her review of your latest poetry collection, Maria Stasinopoulou comments on your elaborate poetic language. What purpose does language serve in your poetry?

If the Maria Stasinopoulou's observation was not specifically concerned with my poetic language, I would maintain that it is ground-breaking critique, combining as it does instruction and intuition. However as her observation is directly related to me, I must admit I feel somewhat confused and must confess that though I feel honored by her opinion, I also feel I am deluding myself. All that I can say with any certainty, regarding my language, is that everything I write starts in my maternal language. (Unfortunately Beckett’s masterpieces in two languages are unique and there seems to be no other. And even my answer here has been translated by an American (and naturalized Greek) Philip Ramp who also did the English translation of It’s Overtaking Us which will soon appear from Fomite Press in Vermont USA).

So just how does language specifically contribute to my poetry…I won’t try to be ingenious by saying my poetry is an art that presupposes one knows not only how to write but knows even better how to erase. I would say that during the writing process there are elusive incidents and inexplicable coincidences and that in the end there is no formula for the creative act of poetry…or if there is such a formula or even formulas…I for one have remained ignorant of them. The only sure thing I know is that what even the best writers do not necessarily make a great poem every time. In a word it needs to be put in a… DRAWER. As Borges has so aptly put it: The meaning of any definitive text has to do in the end depend solely on religion or fatigue…

“Papalexandrou’s poetry doesn’t want to just be flattering, but rather to put us in front of a big mirror, leaving no way out of reality”. What then is the relationship of poetry to the world it inhabits?

Your question brings to mind the tumultuous and inspired Operetta by Gombrowicz which I saw staged at the Greek National Theater: The corsets of existence are tight…I would just like to add that indeed they get even tighter when we are speaking of a creator who has to work to live and tighter yet when we are speaking of the Greek crisis… and even tighter still when our work…and no matter what we write, when it frequently depends on the criticism of others who know as much about poetry as I do about astrophysics... And so it goes...and goes…and goes…till we drown in it…Or, perhaps, leads us on to other poems which for some reason we never know in going their way find themselves on ours as well…

In recent years there has been an extraordinary burgeoning of poetry in every form: graffiti, blogs, literary magazines, readings in public squares…just to mention a few, How is this strong public awareness to be explained?

There has been an intense need for expression in all ages and periods. What’s happening now is more than likely a reaction to the difficult times we live in. Everyone has a right to express himself. How would he not! But that does not automatically make him a poet. All I’m trying to say is that this turning outward does not of necessity mean that poetry is doing well, because not all those taking part in such manifestations does not mean of and in itself that poetry is doing well…nor does it mean that the participants are good poets or even poets at all for that matter. I think that every poet, if he is really a poet, has something special about him. Poetry, just as all the other forms of artistic creation. is first and foremost a manner of expressing.

How would you comment on current literary production in Greece? Could poetry offer new ways to imagine what could be radically different realities?

At the very least I think that poetry in Greece was, is and will be always something very good. Down through the generations we have had many fine poets and we can be proud of that. Of course in speaking of the singular ways poetry opens the world for us one could say a great deal. Oh!...the real world! There are times one would like to erase the whole thing. And there are many ways of doing it. One of which is creating another present/past. Another is to “write” it into being, not “erase” it; and by writing it regain all the lost time…and in this way one can open up a superb parallel world in front of one’s eyes…

Could a multi-faceted, socio-economic phenomenon, like the current socio-economic crisis, trigger a poetic “cosmogony” and possibly a “new generation” in poetry? If so, based on which poetic and aesthetic criteria?

Look, every period has its difficulties which can in a variety of ways produce a vital and even ground-breaking new poetic generation. As I have stressed it’s the way in which each presumptive poetic generation makes use of the various dead ends that exist. There are no known formulas for this. We all remain bewildered by the mystery of art… Paraphrasing Hamlet’s lengthy monologue in Act II, Scene II... (and based on the ingenious translation of the work by Giorgos Cheimonas into modern Greek) he says:

“…because art is not for the many

nor Is it for the few…but is always

for one person and him alone…”