Vasilis Michaelides: A Tribute to the National Poet of Cyprus

Literary creation is deeply rooted in the island of Cyprus, being a means through which the island’s historic continuity and national self-awareness has been manifested. The beginnings of modern Cypriot poetry, as well as of literature as a whole, conventionally date to 1878, the year in which Cyprus came under British rule. The first literary period extends from 1878 to roughly 1920, influenced by the romantic environment of the First Athenian School. Regarded as the national poet of Cyprus, Vasilis Michaelides is the most prominent figure of this period, establishing the Cypriot dialect as a linguistic medium of the island’s written poetry and thus proving its unlimited potential. 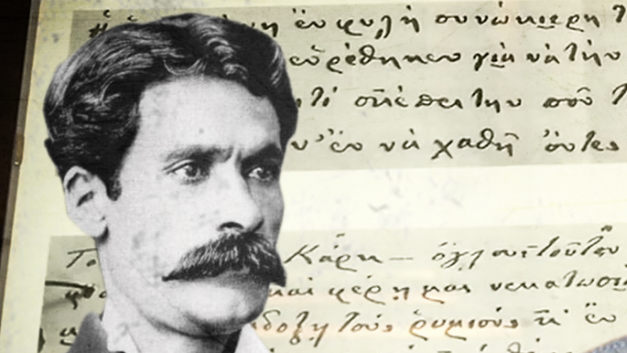 Born in Lefkoniko, a village in the Famagusta District between 1849 and 1853, Vasilis Michaelides moved to Nicosia in 1862 to attend Secondary School. His first contact with the arts came in the form of religious icons in the archbishopric in Nicosia, where he trained as an artist. He subsequently moved to the Diocese of Larnaca where he concentrated on painting in the care of his uncle. In 1873 he published his first poems Usury [Η Τοκογλυφία] and Nightingales and Owls [Αηδόνια και Κουκουβάγιες]. In 1875 he moved to Naples, for further studies in painting. He left Italy in 1877 and went to Greece where he enlisted as a volunteer in the Greek army and fought for the liberation of Thessaly. With the end of Ottoman rule of Cyprus in 1878, he returned to Limassol, staying at the local premises of the Diocese of Larnaca. There he began to write for the local newspaper Alithia.

His first poetry collection The Weak Lyre  [Η Ασθενής Λύρα] was published in 1882. In 1883, The Fairy [H Ανεράδα]. Written in verses that flow like musical melody, in Michaelides’ contemporary dialect of Mesaoria, natural and devoid of superfluous ornamentations, conjuring images reminiscent of a breathtaking landscape, the poem marks a special moment in the entire course of Cypriot poetry.

[From The 9th of July 1821, Translated by Tefkros Symeonides]

There followed his most famous work The 9th of July 1821 [Η 9η Ιουλίου 1821], a poem written in the Cypriot dialect detailing the events leading to the execution of the Greek Cypriot leadership by the Ottoman rulers of the time, and The Woman from Chios [Η Χιώτισσα]. In 1888 he began the publication of the satirical magazine Diavolos and in 1911 he published Poems [Ποιήματα]. In 1915 he ended up at the Limassol poorhouse where he wrote The Dream of the Greek [Το όραμαν του Ρωμιού]. He died penniless and an alcoholic on 18 December 1917.

Commenting on Michaelides' poetry, the French Hellenist Phileas Lebesque, wrote "he succeeded with great delicacy to interpret the Cypriot feeling as he has managed to combine

his dreams with the passion of his poetry". In the words of Yiorgos Moleskis, after a long tenure in the formal language, the katharevousa and the demotiki, Michaelides “went on to write in the Cypriot dialect those poems which would elevate him to the status of an important poet, indeed the national poet of Cyprus”.