Reading Greece: Dimitra Aggelou on Poetry as an Attempt to Absorb the Stimuli of a World that Seems Raw and Violent and Define it Anew 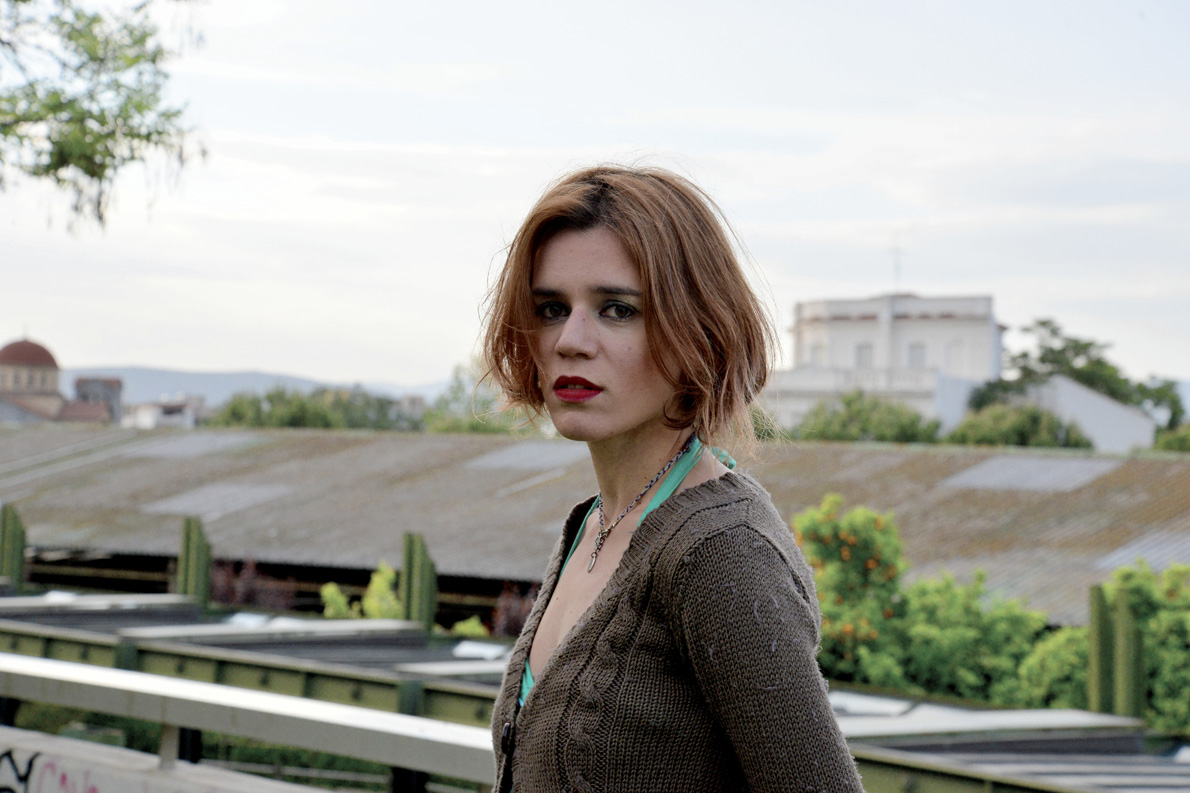 Dimitra Aggelou spoke to Reading Greece* about her latest poetry collection Diaries of a Beehive, “a collage of diary-like confessions, thoughts, images, feelings”, written in “an intensely associative rhythm”, commenting that recurrent themes and axes in her writings are “a thirst for life, and simultaneously a kind of exhaustion stemming from life, as well as childhood and death”. She also explained that “language constitutes the primary device, the impetus, the music that urges”, and noted that in her poems, she attempts to “absorb the stimuli of a world that seems raw and violent and to define this world anew”.

Your fourth poetry collection Diaries of a Beehive was recently published by Smili Editions. Tell us a few things about the book.

The poetry collection Diaries of a Beehive was published by Smili Editions in May 2020. It’s a collage of diary-like confessions, thoughts, images, feelings. When I started composing the collection, I was somewhat conflicted as to whether it should be potentially published. I was thinking that the content was characterized by a kind of undesirable confusion. Yet what prevailed was the organic need for them to move away from me, to follow other courses, to find their place where I thought they belonged, maybe among erratic voices and dust-laden shelves. As for the book’s language, I reckon it is governed by an intensely associative rhythm, I’d even say somewhat delusional at parts, conjuring forth images and musicality.

In her review of the book, Barbara Roussou comments both on a more reflective speech as well as on a more refined poetic language compared to the previous collections. How has your poetry evolved since your first book? Would you say there are recurrent points of reference in your writings?

Let me begin by thanking Barbara Roussou for her critique on the collection. I do believe that there is a stable core in my writings, nevertheless seeking to broaden my creative horizons. When the ego refuses to reconsider, time does so on its part. I reckon that in my first books images were more direct, poignant even. The language in my latest collection may be more inaccessible, more chaotic, yet it remains, as in my previous books, unprocessed, organic, automatic. My language doesn’t change, it disguises itself. As for recurrent themes and axes in my writings, I would say a thirst for life, and simultaneously a kind of exhaustion stemming from life, as well as childhood and death.

What role does language play in your writings? What purpose does the lack of full stops or the indiscernible passing from one poem to the other serve?

Language constitutes the primary device, the impetus, the music that urges. The title of my latest collection intents to pinpoint that the text is a condensation of fragments. Fragments of experiences and impressions, both lived and imaginary. A buzzing beehive. The lack of punctuation (especially full stops), capital letters, and the indiscernible passing from one poem to the other serve exactly this purpose. 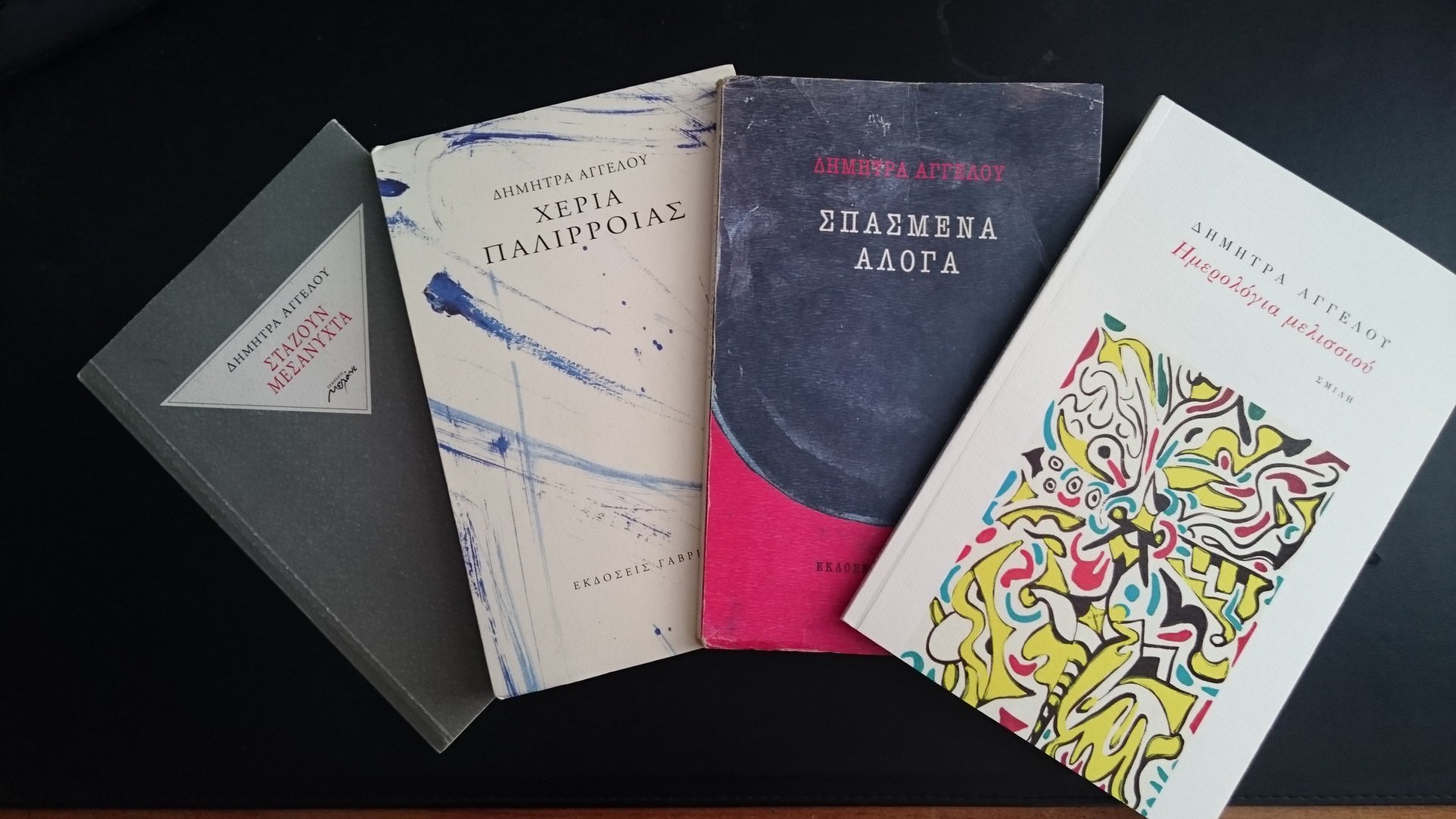 Where does the personal meet the social in your poems? How does poetry converse with the world it inhabits?

I would say that in my poems I attempt to absorb the stimuli of a world that seems raw and violent and to define this world anew within my own, more closed, sensory universe. The reader may become attached to the human core, as it arises naked and expressively free from within the poetic body. Pain, love, fear, tenderness and despair operate as communicating vessels among people and need no wrappings or external references to be communicated.

How would you comment on poetic creation in the era of online communication? What role do the social media play in the promotion of young poets?

I reckon that social online networking creates ground for communication and interaction. Personally speaking, I quite often share my texts or the publications of my books within this context. Yet, there are people whose opinion I highly appreciate that have advised me to keep my writings solely for my books. I am not quite sure whether to agree or disagree with them. In any case, very often when I write, I feel the commanding need to immediately communicate what I wrote, even when there is no specific personal address. As for inspiration or creativity, I reckon that the internet hasn’t played any particular role. I wrote long before I had access to it and the same goes for so many others. As for the promotion of new poets, the internet has certainly played a part, yet it has no filters and there are many issues to be considered. For instance, often emphasis is laid on the extent someone promotes and advertises his/her work and not on the work itself. Many other issues exist, on which I am not in the capacity to comment.

The new ‘generation’ of Greek poets have been characterized as ‘multicultural, multiethnic and multigenerational”. How do they relate to world literature? Where does the national/local meet the global?

I believe I might not be the right person to answer this question, to be honest.  I am not in particularly close touch with the modern Greek literary scene. Lately I don’t read much and when I do, I opt for foreign novels. Therefore, please forgive me but I will have to skip the question J