“Theatre is not an artistic re-enactment of external reality;
it is primarily a representation of internal reality”.

2022 has been declared as Literary Year of Iakovos Kambanellis by the Ministry of Culture and Sports, in honour of his contribution to the Hellenic nation both as an artist and as a man. Within this framework, a series of events is organized both in Greece and abroad aiming to bring to the fore the multidimensional work and contribution of the internationally renowned writer to Greek arts and Letters.

Iakovos Kambanellis (1921-2011) was a writer and spiritual man who, though self-taught in his area of expertise, mastered all types of prose and verse, with iconic literary works and essays, unsurpassed theatrical texts, timeless screenplays, and, of course, iconic songs with music by Mikis Theodorakis.

With 40 theatrical works, he is considered one of the most prolific Greek playwrights of the 20th century. He contributed to the liberation of modern Greek theatre from the isolation in which it found itself, redirecting it from a theatre of manners and theatrical revues to social realism, poetic symbolism, satire, and minimalism. He is considered the father of modern Greek theatre and the leading voice to have articulated the reality experienced by the Greek people during the second half of the twentieth century.

As Kambanellis himself eloquently put it, “I believe that the theatre owes its continuous existence -a dynamic presence internationally, in fact, to its fortunately continuous anthropocentrism, which has always been, from the very beginning, its predominant element, its raison d’etre. Since the stage is the space par excellence where humans seek to understand what they are or could be”. He created fully drawn characters who are recognizable, authentic. Beyond his skillful writing, the immediacy of his language is one of the basic reasons that the Greeks identified with his work, loved it, and recognized themselves in his texts.

Dancing in the Wheatfields (1950) launched his long career in the modern Greek theatre. This production was followed by The Hidden Sun, Daddy War, Ulysses, Come Home, and the one acts: The Way, The Gorilla and the Hydrangea as well as other plays which would be performed much later. Recognition as a playwright would come with The Seventh Day of Creation (1956), which was embraced by both critics and the public alike. The Courtyard of Miracles (1957), was hailed as a major artistic event and established Kambanellis as an innovator in modern Greek playwriting.

Τhe intensely unstable political climate of the politically agitated 1960s concerned Kambanellis, who found himself at a critical turning point and reconsidering his modes of expression. He decided to visit London, to study the latest artistic and theatrical trends. This experience led to the writing of The Neighborhood of Angels (1963). The play, which took the form of a folk opera, introduced a new type of theatrical language to the Greek stage. 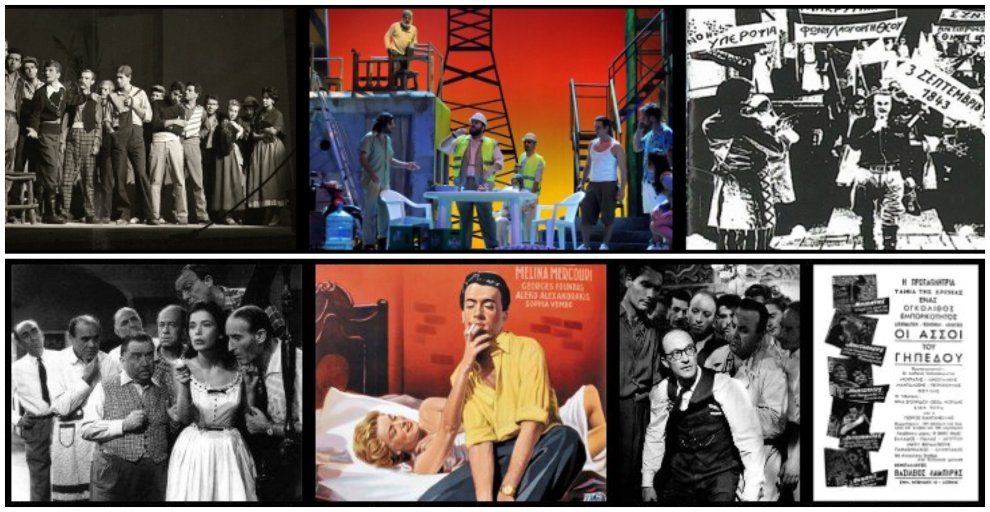 The imposition of the dictatorship on April 21, 1967, suspended artistic activity in the country, and, like all his fellow writers, Kambanellis, decided to remain silent. He broke his silence with two works: The Penal Colony (1972), an adaptation for the theatre of Kafka’s short story, and the theatrical revue, Our Grand Circus (1973), which, during the course of its 18-month run, became a statement of anti-dictatorship protest. The Broad Bean and the Chickpea (1974) and Our Enemy, the People (1975) established Kambanellis as a symbol of resistance to all forms of fascism.

After an eight-year absence from the theatre, following his appointment as director of ERT Radio, Kambanellis succeeded in making a strong comeback with the play, The Invisible Theatre Company (1989). His concerns about the interpersonal relationships of the declining petit-bourgeoisie of the time and the challenges posed by political recklessness and corruption were expressed in the work, The Road Passes Within (1991).

The clash between the individual and reality was the focus of The Eulogy (1990), while in the trilogy The Supper (Letter to Orestes, The Supper, Thebes Side Street) (1993), Kambanellis engaged in a conversation with Greek and foreign playwrights of the international theatre who had written works based on themes and forms of ancient Greek tragedy. With this trilogy he opened up a new cycle of works of an experimental nature, which he referred to as “studies and first attempts”. The later works, The Last Act, A Meeting Elsewhere, A Comedy, The Difficult Nights of Mr. Thomas, expanded and completed Kambanellis’ oeuvre. In the latter work, a detailed study of heroes in conversation with the writer, the characters express worry and anxiety regarding the decline of the physical body with reference to existential questions.

His plays have been staged by nearly all modern Greek directors  and have been performed by the National Theatre of Greece, National Theatre of Northern Greece, various Greek regional municipal theatres, National Theatre of Cyprus, and independent theatre companies. They have been translated and produced in the U.S., England, France, Germany, Italy. Spain, Austria, Hungary, Poland, Sweden, Romania, Bulgaria, Norway, Lithuania, Turkey, Israel, Australia, and China.

His contribution to modern Greek cinema as a screenwriter was equally significant. In addition to penning the script for The Ogre of Athens, he wrote the screenplays for The Abduction of Persephone, The Carriage, and Girls in the Sun. Kambanellis also dedicated a great deal of professional effort to the radio, writing and producing a very large number of broadcasts characterized by original thematic material as well as adaptations of literary and theatrical works. As a columnist, essayist, and writer of “epikerotita,” or current-events short stories, he contributed to the newspapers Eleftheria (1963-1965), Anendotos (1965-1966), and Ta Nea (1975).

Kambanellis’ experience in the Nazi concentration camp, which had preoccupied him many years earlier, was described in his memoir, Mauthausen. First published by Themelio Publications (1961) and subsequently by Kedros Publishers, the memoir achieved immediate publishing success. With its successive republications to the present day, it has gained renown as a major work of anti-war literature. The sensation created by the book prompted Kambanellis to write the lyrics to a four-song cycle of the same name, set to music by Mikis Theodorakis and performed to great acclaim in Greece and abroad to this day.

In addition to being a playwright, prose writer, and essayist, Kambanellis was a lyricist. His song lyrics were set to music by Manos Hadjidakis, Mikis Theodorakis, Stavros Xarhakos and contributed to the development of the modern Greek song. These songs achieved hit status and are still sung today.