Iordanis Papadopoulos (born 1976) is the author of three books. His most recent book Into the WOODS is a cross-genre book published in 2022 by Ikaros. He has also published two books of poetry. He is a member of the live art group "KangarooCourt". He lives in Athens and works as a public school teacher. 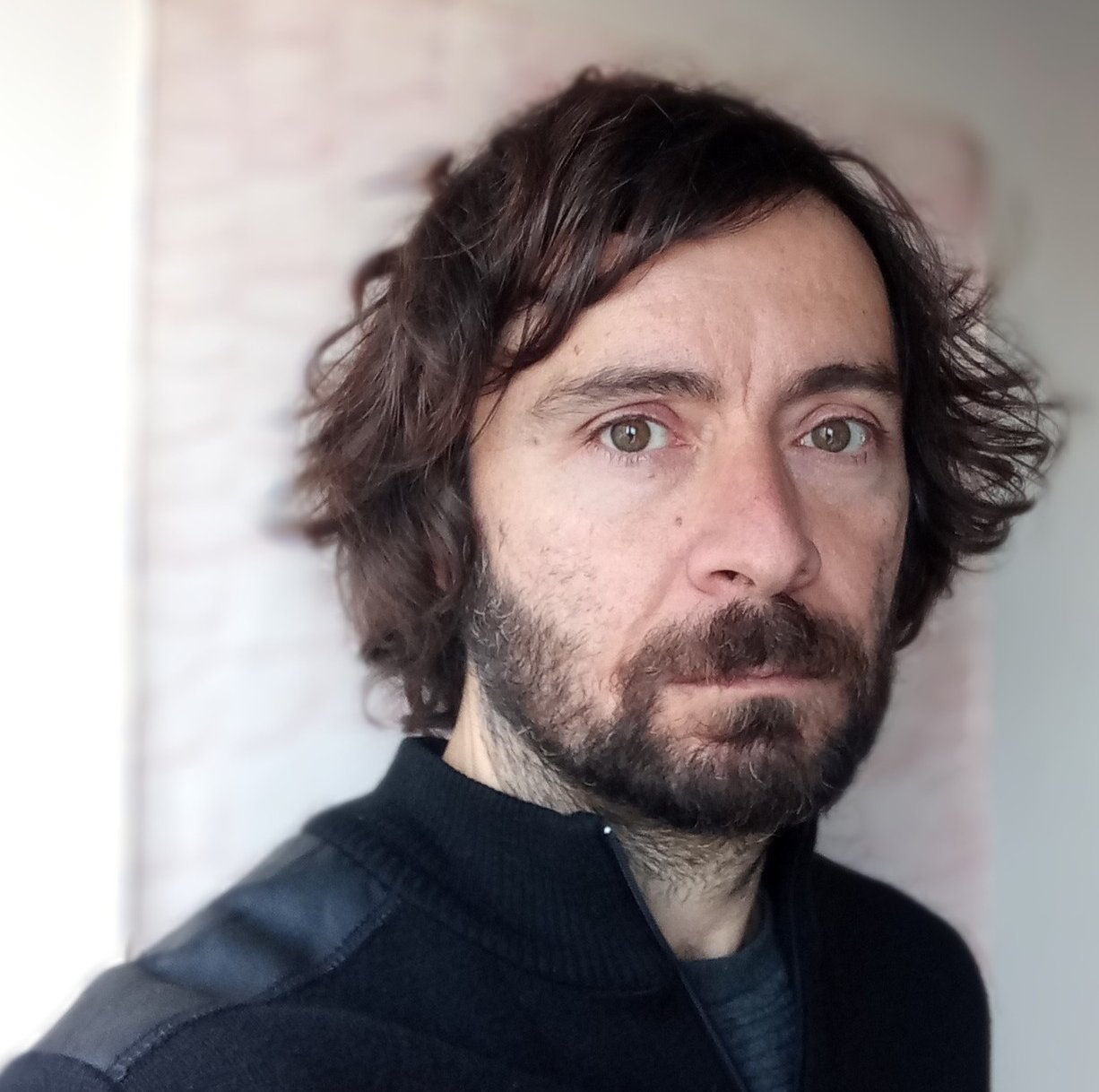 Your latest writing venture Στα ΔΑΣΗ [Ιnto the WOODS] recently published by Ikaros received quite favorable reviews upon publication. Tell us a few things about the book.

The book In the WOODS is my third book to be published.

It is a book with the forest at its centre as a concept, natural habitat, sound, image, smell, spectrum, origin and destination, refuge and exile.

A book about how I perceive the forest, both primarily, experientially, and mediated through the arts and the sciences, high and low culture, friends, strangers, and even my daughter. It is a book equally introverted and extroverted, for the needs of which I turned to both personal memories and experiences, as well as to the analysis of many references related to forests.

Moreover, in this book one can read different languages and writing styles, which is something I am interested in, a major request in all my books. The basis of Into the WOODS may be a kind of diary writing, yet as it is structured and developed one can discern fictional elements, poetic remnants, confessional tones, songs as well as short lines of thought on the subject.

In the book, the forest is not just a natural notion, but acquires various imaginative, literary, poetic, cinematic, as well as metaphorical, metonymic dimensions. Inthisframework, wouldyousaythatin essence the book constitutes an extensive study on the poetics of FORESTS?

Exactly. This was my intention from the beginning. To write about forests as if I haven’t set foot in them. That’s why I avoided getting close to them while I was writing the book. I relied mainly on research, and by research, I mean how I have perceived forests through literary and, more generally, artistic narratives and images, how I (re)read and (re)thought about them as I am writing about them; how they re-emerge, how they appear before me and I become lost in them during the process of writing. So, the book is clearly a meeting point between poetic and forest ecology, a personal encounter with forests.

Commenting on the book, Vassilis Lambropoulos pointed to themultiple language games (FORESTS) it invites the reader to participate in. What role does language play in your writings?

I am glad you pointed out this particular comment by critic Vassilis Lambropoulos given that this playful attitude towards language is crucial in most of my texts. Αnd, of course, when I talk about language plays I don’t refer to a frivolous mood, a lightness or tepidity, but rather to the significance a play can have for a child and the way a child enters into this play with all his being, with boldness, perhaps a bit of risk, feeling that it is the most important thing in his life; that it is through this play that he advances and developshis potential, that it’s only through this play that he can understand himself, build his body and his spirit on a firm basis. Similarly, it was through language plays that I have managed to develop my literary technique, to expand the limits of (my) language, to find a voice and then to erase it. 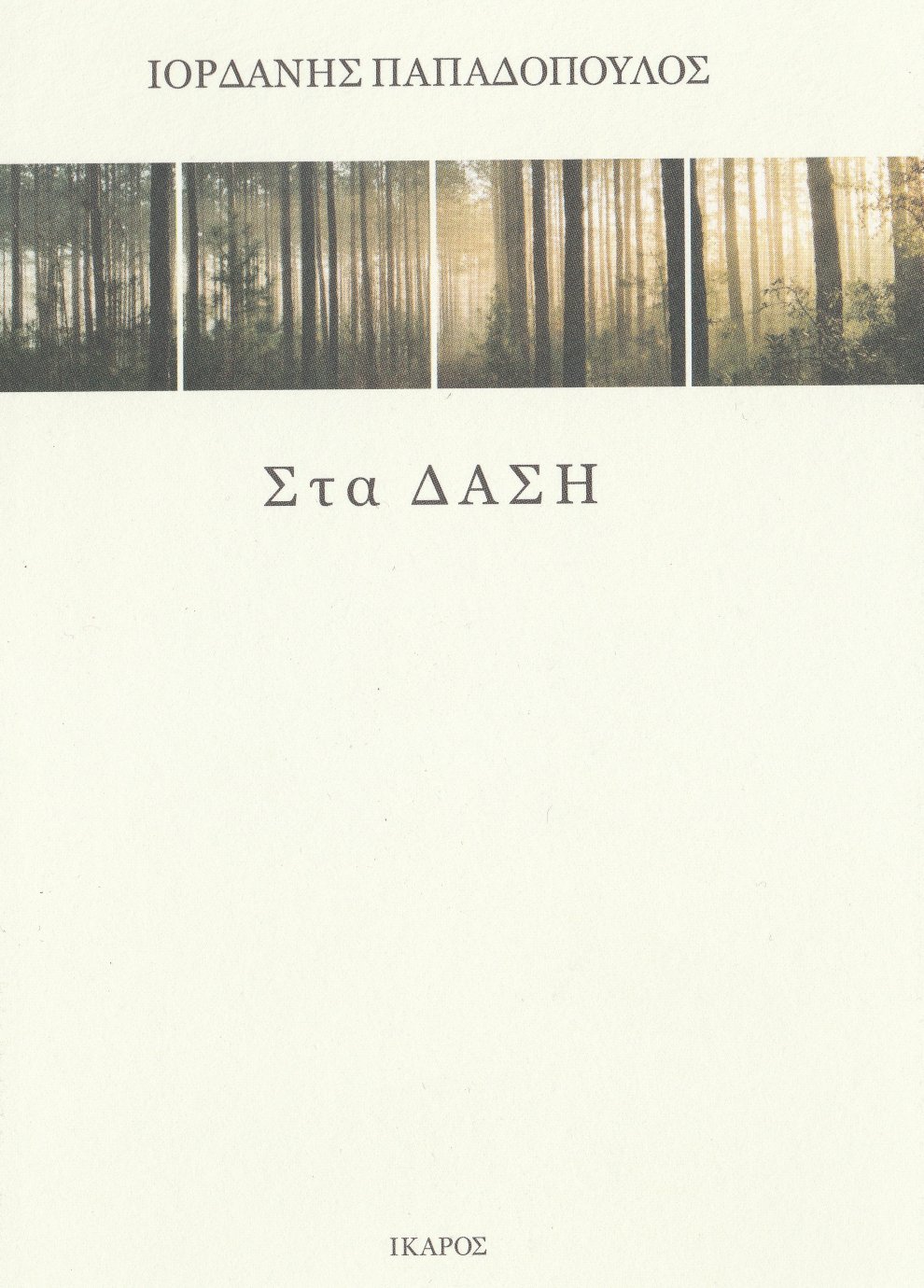 You are part of the group KangarooCourt, which through a harmonic blend of different forms of art, aims to experiment with the “limits of (representation), the utterant body, the aestheticised speech’. Could you tell us a few things about this artistic venture?

My joining a group that moves in the field of performing arts arose partly from my long-term relationship with visual artists but also from a narrowness/anxiety, perhaps due to the flatness, of the blank page; thus, from a need to move into the three dimensions, to put the body, flesh and bones, at the center of creation, to form images with objects, without the help of words.

It is a group with no clear and distinct roles among its members, where the opinion of the "experts" does not weigh more (the group includes writers, visual artists, choreographers) and this works so far in a rather magical way I would say, to the advantage of the group’s various actions.

My first poetry book titled Το βουνό και ο ποιητής δεν πήραν είδηση [The mountain and the poet took no notice] (Roes, 2009) was a collection of my personal moments in the city laden with large doses of existential angst. How else could a young poet start his publishing career when the poetry of Karouzos, Dimoula, Leontaris, Vakalo, Hatzilazarou, Mansour and Celan was buzzing in his ears.

My next two books focused on and developed around a single concept. I could somewhat naively call them concept books. In Μπρα ντε φερ, Ένα χειρισμός πρόγνωσης [Bras de fer. How to handle a forecast](Typothito/Dardanos, 2015) I worked - with the financial crisis in the background - on the concept of forecasting and whether reality ultimately exceeds forecasts, fascinated by the theory of Black Swans by N.N. Taleb. As for this year's book Into the WOODS (Ikaros, 2022), its subject is what first comes to mind, yet not limited to this since throughout the book I often go astray and what is self-evident is constantly overturned.

At first glance, both my last two books seem to have a hard, metallic core, so to speak, but I think something warm and human emerges on the surface. No matter how often I write relying on references from the arts and sciences, eventually everything is filtered by an underlying existential tension, projected onto the human body and psyche as well as on everyday experience.

Finally, as I have already mentioned, language and my need to play with it, is what most often guides me, it strongly determines the development of my subjects. It often happens that I end up somewhere, in terms of form and/or content, without having any prior given intention or aim; it is just the play with language that has taken me there. My request was from early on, and still remains, that my language, my writing, disturbs me, diverts me from acquired positions and views; if possible not to recognize any writing as my own. Perhaps this ultimately defines my poetics more strongly than any of my references and subjects. 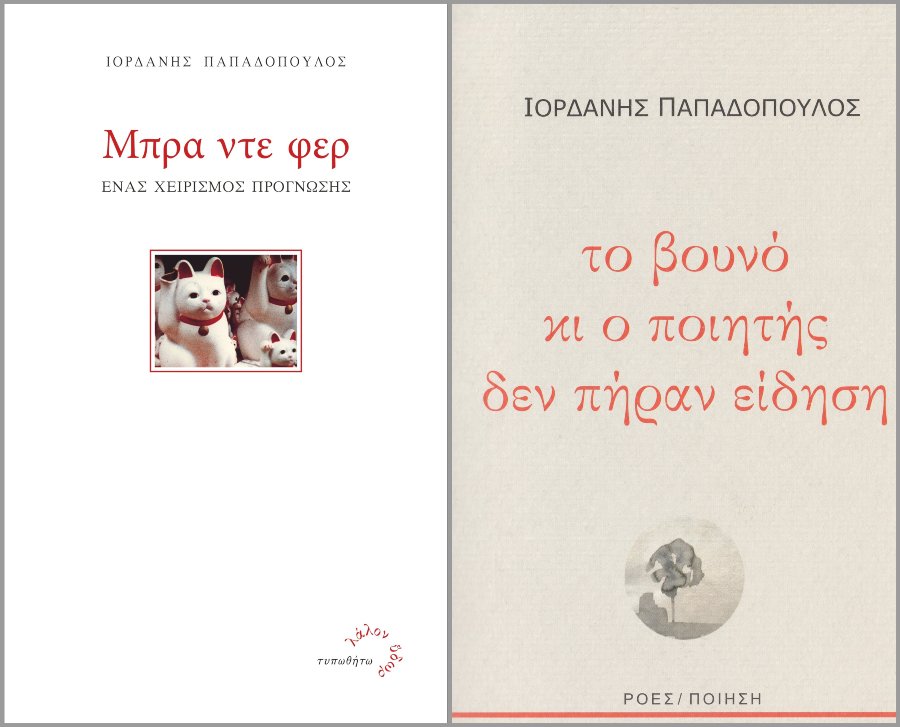 In general, how does literature, and poetry in specific, participates and relates to other arts? And in turn does this interrelation influence both the literary content and the literary language?

First of all, an interaction among all arts should be a major concern for all artists. Personally speaking, I cannot think of a writer, and an artist in general, that is confined in their own art. It seems to me as a kind of disability which can hardly ever bear considerable fruit. A confinement in specific artistic forms can only have a restrictive impact on their art. A dull art. In the case of “open” artists, the influence other arts exert becomes evident both in the form and the content of their works. There are numerous cases of such artists in all fields of art: John Ashbery and Anne Carson, Andrei Tarkovsky, Derek Jarman, Chris Marker and Antoinetta Angelidi, Cy Twombly and Louise Bourgeois.

Personally speaking, apart from the content, I am interested in incorporating elements of other arts (visual arts and cinema mainly) in the form of my texts. For instance, I am interested in structuring a book in the form of a visual installation, to apply zoom in-out techniques to a poem or I envy Godard for filming Pierrot le Fou as one of the best poems I have seen/read.

Finally, let me go one step further. Personally, I am equally concerned with the relationship between poetry, and literature in general, and science. In this field of scientific theories and reports, which can be characterized - with a certain amount of naivety - as anti-poetic, what fascinates me, what intrigues me is to discern and elicit their poetic nature, bring it to the surface and incorporate it in my texts. Τοwork with their inductive power and their precarious truth, and subvert them, maybe even make them stronger.

How does Greek literature relate to world literature nowadays? Where and how does the local/national interweave with the global?

It’s not easy for me to answer this question. Not only because I am not an expert in the field but also because it upsets me. I reckon that Greek literature still remains on the fringes of world literature. Certainly our “minor” language has played a part, e.g. things are much more favorable for Greek visual artists and their ‘language’ that more easily crosses borders. Yet, this absence is primarily due to insufficient policies from above, along with the fact that on an individual level as well, Greek writers are not particularly known for their mobility, for their extroverted attitude.

Of course, without support it is not easy, especially in recent years. Fortunately, there are writers who, despite the unfavorable conditions and at a personal cost, strive to keep their antennas and channels of communication open; they participate in European and world literary festivals, while there are others who write in English so as to be included in literary publications and online magazines abroad. However, these are just personal initiatives and not something centrally coordinated and planned, within a long-term programme in support of mainly young writers.