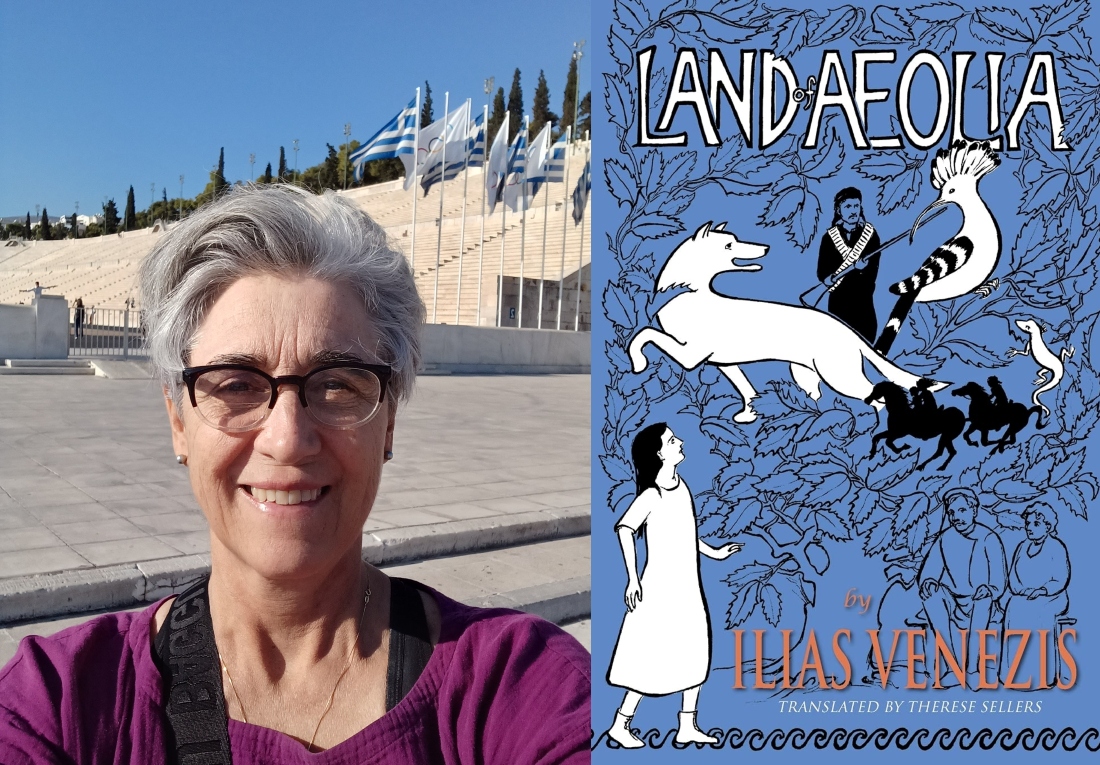 Dr. Therese Sellers is an author, translator, and Modern Greek scholar. Born in Philadelphia, she studied Ancient Greek at Germantown Friends School and Harvard College. While at Harvard, she also took classes in Modern Greek language and poetry. She went on to earn a PhD in Modern Greek literature and translation from Boston University.

Sellers has often spent long periods in Greece since 1987, and feels attached to the Greek land as well as the language. After many years of teaching Latin and Greek, she published Alpha is for Anthropos (2013), a collection of nursery rhymes she composed for teaching Ancient Greek to children. The book was illustrated by her sister, Lucy Bell Wait Jarka-Sellers, in the style of Greek red-figure vase painting.

In 2020, she published a translation of Land of Aeolia (Eoliki Yi, 1943) a seminal work by Anatolian-born Greek writer Ilias Venezis, from Greek into English (Denise Harvey Publisher, 2020). Although an earlier English version of the book had already been published in 1949 (by E.D. Scott-Kilvert, under the title Aeolia), this is the first full and unabridged English translation of Venezis’ most iconic novel, which remains faithful to the original Greek text. The publication also features a prologue by Bruce Clark, author, among others, of Twice a Stranger (2005), a study Greek-Turkish population exchanges of 1923, and Athens, City of Wisdom (2021).

Greek News Agenda spoke with Therese Sellers* about what made her become a Hellenist and what Ancient and Modern Greek have to offer to foreign learners today. 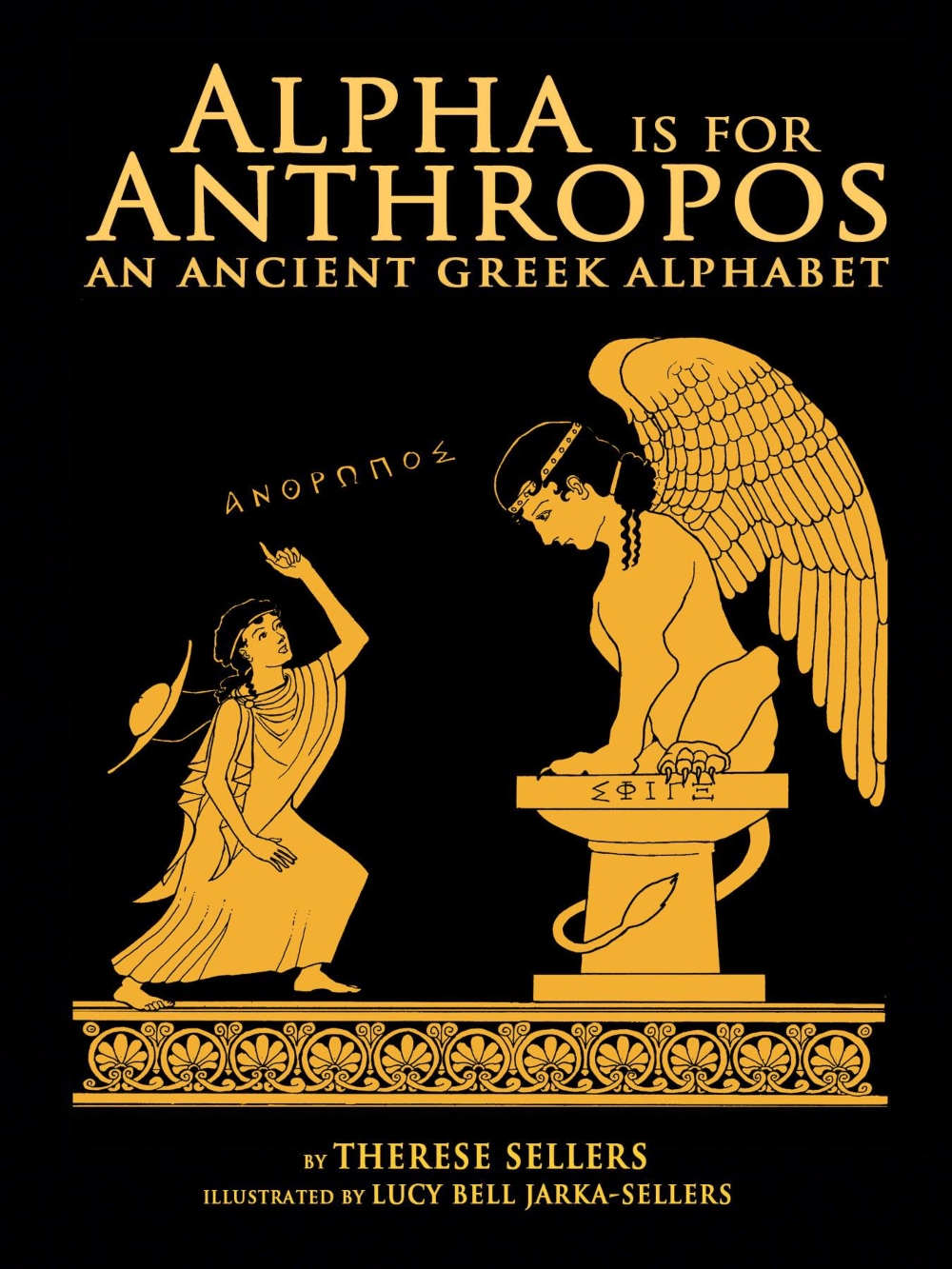 According to your biographical note at the Boston Athenæum, you describe yourself as "Greek by affection, if not by birth". How did you come into contact with Ancient Greek culture growing up?

I first learned about the Ancient Greeks as a school child in Philadelphia. Studying Greece in fourth grade was an established part of my school’s curriculum. This is also when I taught myself the letters of the Greek alphabet (with the help of my mathematician father). I was excited by the vitality of the Homeric heroes and the intensity of their conflicts. I loved the archetypal Olympian gods, especially Athena. But more than anything else, I was touched by the pathos of Greek tragedy. At nine years old, I was cast as Antigone in our class production of Sophocles’ play. I remember wanting to make the audience cry as I delivered her final words before entering the tomb alive.

What prompted you to also learn Modern Greek, which has a very different vocabulary, grammar structure and even pronunciation compared to the language's ancient form?

I got the idea to learn Modern Greek from a Greek student I met at Harvard in 1978. We met at a mixer for new students in the Classics Department, and he asked me if I knew the Modern Greek poets. I was ashamed to answer that I did not. I started taking Modern Greek in addition to my classics courses and was delighted to experience Greek as a living language for the first time. Learning to speak Modern Greek also had the surprising effect of helping me read Ancient Greek texts with increased fluency and comprehension.

I went on to take a course in Modern Greek Poetry with George Savidis, who held the recently-established George Seferis Chair of Modern Greek Studies. We read Solomos, Palamas, Cavafy, Sikelianos, Seferis and Elytis, and their poems seemed to me like living incarnations of the Classical Greek literature I loved. 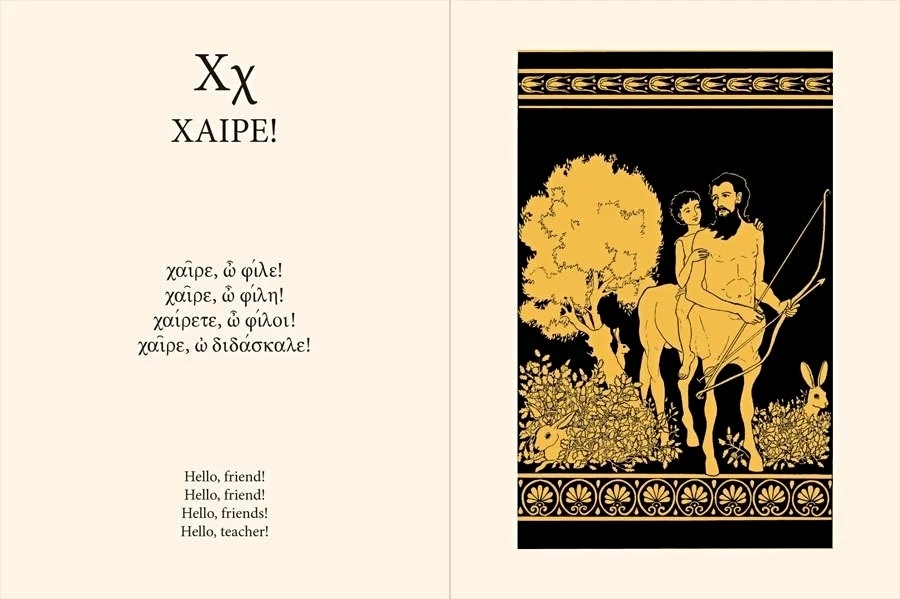 You wrote Alpha is for Anthropos, a picture book with short poems to help teach Ancient Greek to young children. Do you believe that children can easily become invested in learning an ancient language in the fast moving world of modern technology?

I certainly agree that the proposition of teaching Ancient Greek to children can seem like a non-starter! When a friend first asked me to give Greek lessons to her four-year-old, I thought she was crazy. For it to make sense, you have to abandon the model of teaching Ancient Greek as a dry linguistic system. I teach children Greek with songs. My goal in teaching Greek to children is to give them the riches of the Greek imagination that inspired me as a child and still inspire me. The Greek letters and words are not an end in themselves. I find that children are happy to leave modern technology behind when they are singing, dancing, making art, and acting out stories from Greek mythology. This is how my Greek classes with children are spent.

The main reason why most young Greeks now learn (at least) one foreign language is the fact that Modern Greek is considered a rather "small language", so multilingualism is essential for better business and education opportunities; how interested are native English speakers in going through the demanding process of learning another language, especially an ancient one or one used in a relatively small and distant country?

It is certainly true that learning Greek has fewer practical applications that learning a language used in international business. We have discussed Ancient Greek as a key to the riches of Ancient Greek thought and culture, even for children. But regarding Greece itself, I cannot accept its characterization as simply ‘a relatively small and distant country!’ Many Europeans, in their imagination, trace their own cultural ancestry back to Greece in some way. Greece has a mystical dimension that can evoke deep longing within people from all over the world and can transform them. Philhellenes such as George Byron, Eva Palmer Sikelianos and many more have committed their lives, their fortunes and even their health to pursuing the chimera that is Greece. 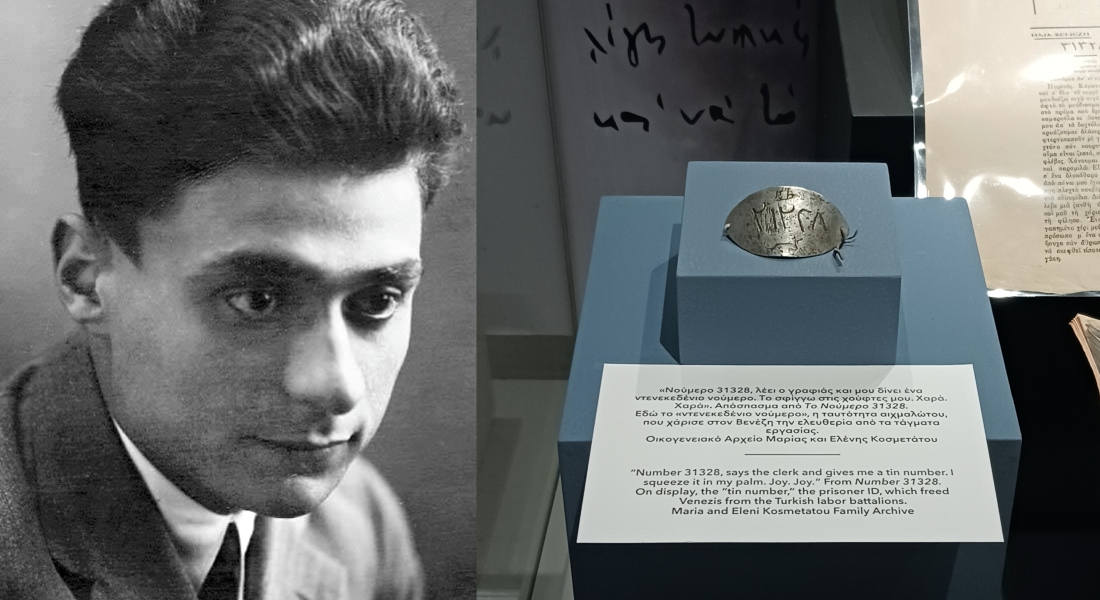 Left: Ilias Venezis as a young man; right: The tin bracelet with the prisoner number 31328 –given to Ilias Venezis at the Ottoman labor battalions– after which his first, autobiographical novel was titled; it is written in Eastern Arabic numerals, since the (Latin-based) modern Turkish script was not adopted until 1928. On display at the Gennadius Library, loaned by Venezis’ family for the exhibition The Epic of Anatolia in the Greek Imagination (October 20, 2022 - February 20, 2023); photo by Therese Sellers

You masterfully translated Land of Aeolia, the most important work of Asia Minor-born Greek writer Ilias Venezis. What is it that drew you to this novel and what do you think it can offer to contemporary American (and other English-speaking) readers?

Thank you for your appreciation of my translation. Venezis’ Land of Aeolia, is one of the most lyrical and magical books I have ever read. It has been in print continuously for almost eighty years and has been translated into over twenty languages. I thought English readers deserved a complete translation of this classic of world literature. Land of Aeolia captures the passions of childhood and coming of age with a compelling and devastating intensity. It is also an extraordinary first-person account of a world on the verge of being demolished by the First World War and all the atrocities of the twentieth century that were to follow. And finally, the loss of homeland experienced by the author has a particular resonance now during this global refugee crisis.

Are you currently working on any other projects related to Greek culture or language?

Yes, my current project is to revise a translation of Venezis’ first novel, Number 31328, which describes his experience as a prisoner in a Turkish labor battalion from 1922-1923. The translation was done by the author’s daughter, Anna Venezis, in collaboration with a British friend, but she died before the project was complete. Her daughters have asked me to finish the work and see it through to publication.

Read also via Greek News Agenda: BOOK OF THE MONTH: "Land of Aeolia" by Ilias Venezis; Reading Greece: The Asia Minor Catastrophe in Modern Greek Literature; An Englishwoman in Evia: Publisher Denise Harvey on her love for Greek literature and culture; Bruce Clark: "The Acropolis never ceased to be a place of spiritual importance"