POEM OF THE MONTH: ‘Winter 1942’ by Manolis Anagnostakis

Manolis Anagnostakis is justly considered to be one of the most important poets to have emerged in Greece after World War II – that is, after the ‘famous’ modernist generation of Seferis, Elytis and Ritsos. A leading poet of the first post-war generation, he was a political conscientious poet was imprisoned and sentenced to death for his ideas and was described as the “poet of defeat” because his great work was inspired by the painful experience of the war. 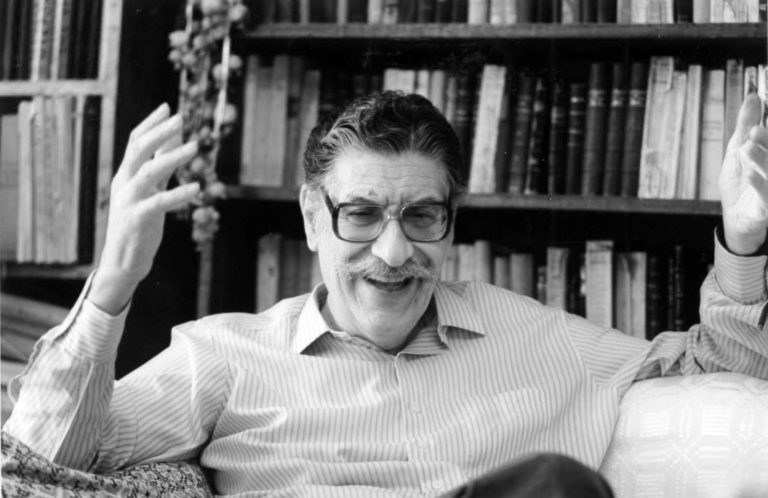 Anagnostakis was born in Thessaloniki and trained as a doctor, specializing in radiology. His first book of poetry, Epoches [Seasons] was published in 1945, with poems from the dramatic experiences of Occupation. His left-wing sympathies had inspired him to join the Resistance, which would lead to his being sentenced to death by a military court during the Civil War. Arrested for his involvement with the Student Movement at the University of Thessaloniki in 1948, Anagnostakis spent several years in Eptapyrgion, a state prison. His second volume, Epoches 2 was published after he was imprisoned in 1948. In the next year, Anagnostakis was both expelled from the Communist Party of Greece and tried in court. He received a death sentence, but outsurvived the regime. Upon his release in 1951, he published the last book in the cycle.

Anagnostakis began a new cycle of work with his Synecheia [The Continuation], in 1954, and its sequel in 1955. A collection of his works was published the next year. He spent 1959 through 1961 as editor of Kritike [Criticism], a journal which marked the aesthetic and political landscape of the time; it pitted a leftist, progressivist alternative against the romanticizations of nation-statism and the dogmatisms of the Party, and it promoted an interdisciplinarity far ahead of its time. In its pages, a new generation of intellectuals – Nora Anagnostakis, Eleni Vakalo, Panos Thasitis, Yiannis Dallas, Vyron Leondaris, and others – spoke out.

In his early poems, Anagnostakis both sets the tone, and takes to extremes, the terse, unadorned presentation of a grim reality that is characteristic of all left-wing poetry of that time. As Roderick Beaton has noted, "beyond the bold, conversational tone of the narration lies a deep distrust of the poet’s very medium, which runs through almost all the poetry of his generation. For Anagnostakis, words are inadequate, the message of death reduced to a commonplace in the face of events whose very ‘simplicity’ makes them more terrible still. There is simply no time to contemplate the event – not even, or especially not, for the poet."

The calendar once more dawned Sunday.

Seven days
One after the other
Bound together
All the same
Like the jet-black beads
Of seminary rosaries.

Identical
Hours
Without awareness
Trying to shine
On a background of pages
The colour of mourning.

A day of dubious joy
Perhaps just one hour
A few moments.
In the evening the waiting begins again
Again another week, four, fifty-two
………………………………
Today its been raining since morning
A fine yellow sleet.

Categorizing Anagnostakis' poetry into a movement has proven somewhat challenging for critics. Literary critic Vangelis Hadjivassiliou characterizes the period of the Continuations as "wholly political". Nassos Vagenas, on the other hand, divides post-war Greek poetry into Marxist, existentialist, and surrealist, and then places Anagnostakis in the existentialist movement. Ramp suggests that the poet's lack of recognition outside of Greece can be attributed to the fact that Anagnostakis' poetry is politically "committed", but agrees that the poetry is not influenced by surrealism.

As professor Lianna Theodoratou puts it, for Anagnostakis, poetry tells us that there is infinite hope, but only as long as we refuse to yield to what resists us, as long as we continue to stand and rebel against defeat - even, and perhaps especially when, it is everywhere around us. For Anagnostakis, defeat, true defeat, can only occur if we surrender to the usual meaning of defeat, if we choose to believe that there is a clear distinction between winning and loosing.

After his collection The Target (1969-1970), Anagnostakis is generally understood to have receded into silence (or resorted to genres other than poetry, and infrequently at that). “I will not rewrite the terrible scenery of our times”, he had clarified, “because I completed my work. I choose silence.” Perhaps because, as he had said in one of his rare interviews, “poetry is a work of youth. It needs excitement, delusions, hallucinations. Those are for the young”.

With his passing in 2005, we are left with a poetic oeuvre that is as brief as any: the number of his published poems is less than a hundred. Yet this number is wholly disproportionate to these poems’ lasting influence on contemporary Greek literature. Many of his verses have achieved a unique status in the language. For the poet has cast a long shadow on the Greek world of letters from the early 1940s to his death. And he did so not solely through his poetry, but also by his versatile means of speaking out as a journalist, editor, radio broadcaster, anthologist, and politician, in short, as a public intellectual.

His poems have been translated into English, French, German, Italian and were composed by composers such as Mikis Theodorakis, Thanos Mikroutsikos, Michalis Grigoriou, Giannis Markopoulos and Dimitris Papadimitriou. He was awarded the State Prize for Poetry (1986) and the Grand Prize for Literature (2002).