POETRY OF THE MONTH: Shedding New Light on the Poetry of T.K. Papatsonis

T.K. Papatsonis was a multifaceted writer, whose work has increasingly attracted the interest of academic and literary cycles in the last decades. He wrote poetry, essays, literary and artistic reviews, travelogues, and has translated a number of important works of literature.

In 1934 he published his first collection of poetry, under the title Ekloge A [Selection I]. The work is divided into four parts, and poetry of a religious content/overtones is predominant in it. But Papatsonis’ profound religiosity, which runs through his works, is firmly rooted in the ground. He does not avoid worldly matters, he does not refute life nor earthly joys, and he does not affect to despise ordinary and everyday pleasures, but rather attempts to explain them through the prism of the Divine. In 1944, during the cruel years of the country’s occupation, he published Ursa Minor, which he characterized as "a critical point in the whole of his poetic ambition." He reissued Ekloge A in 1962, while also publishing a new collection called Ekloge B [Selection II], divided into five parts, and covering much the same ground as his first one. 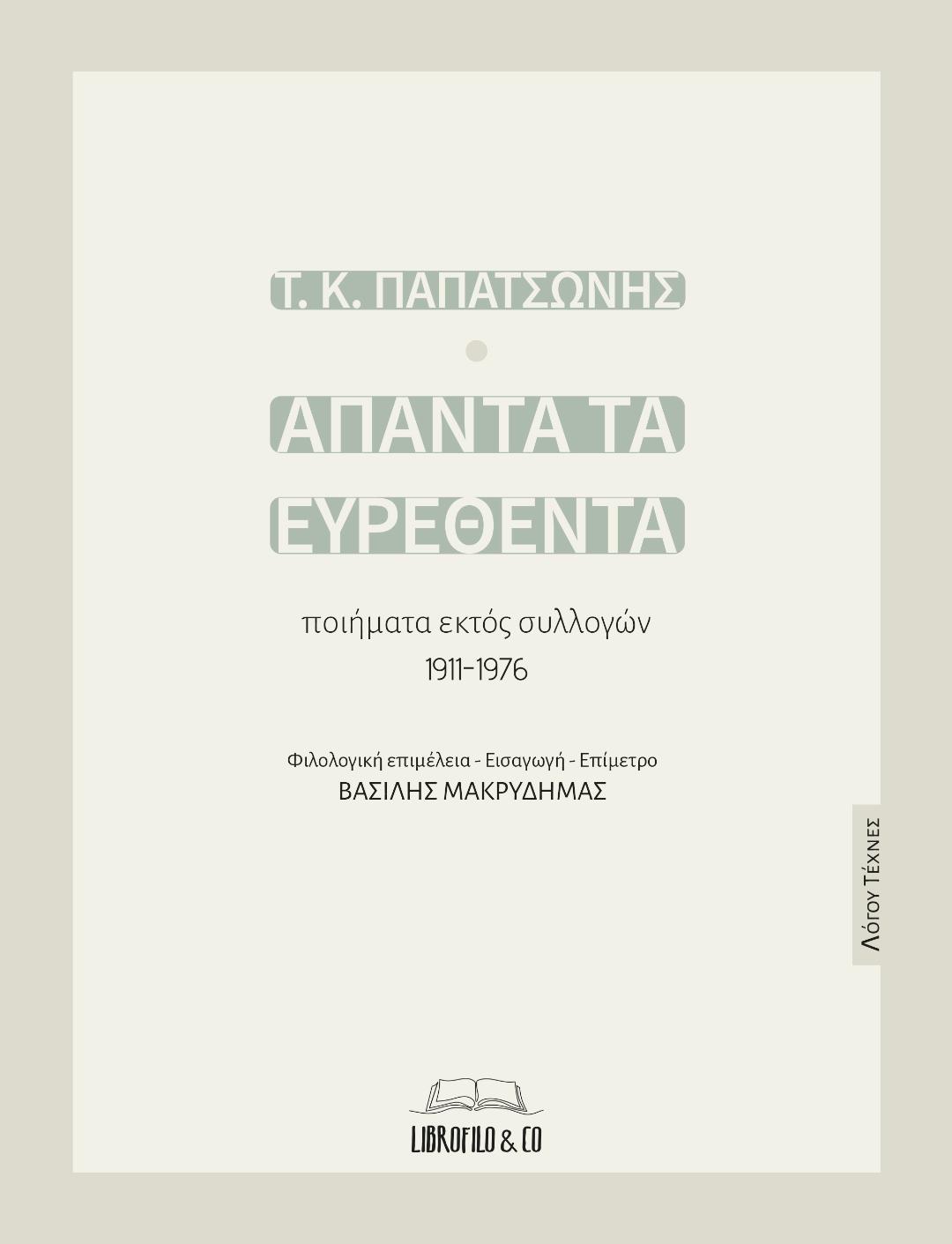 Yet, Papatsonis was particularly selective in publishing both his poetic and critical-essay work. The two collective volumes do not contain the entire published work of the poet. Many poems that appeared in literary journals and newspapers of the 20th century, from 1911 to 1976 – the years from his first appearance in Greek literary events until his death – were not included in Ekloge A and Ekloge B. These 67 poems are collected in a new volume titled Άπαντα τα ευρεθέντα ποιήματα εκτός συλλογών [Librofilo & CΟ, 2022], which is completed by 28 poems, occasionally drawn from the poet's archive after his death and published in various publications or books. So, we now avail 95 poems which not only complete the work of an influential poetic personality of Greek letters, but above all highlight his multifaceted creative spirit.

“The poems presented in the book depict the poet's attempt to detect the conditions of the ontological existence of man and its connection with the hereafter. To be more precise, these poems, especially in their chronological sequence, represent the transformations of the metaphysical on a conceptual, aesthetic and moral level. In other words, we follow the way in which Papatsonis is involved in the attempt to determine the ontological essence of man”, we read in the introductory note.

In the words of the book’s editor, Vassilis Makridimas, “the poetry of Papatsonis trains us precisely to face the difficulties of an important work. His scholarliness was the reason that every time I came up in his writings with a reference to an unknown creator, a difficult concept, a Christian context or a reference to another poem (whether Greek or foreign), I looked back to find more details and then try a new reading in light of the newly acquired knowledge. To a certain extent, I believe that the same will be experienced by the readers of the present edition, which includes the poems that Papatsonis himself did not publish in his two collected works. The poet does not invite us to simply participate in an encyclopaedic game of knowledge, but to immerse ourselves in an existential wandering in order to discover the way to place ourselves firmly ‘on what has been balanced / by absolute Wisdom’, as he characteristically writes”.

The language Papatsonis employs in his poetry is a mixture of Demotic Greek with scholarly types of the ecclesiastical language, as well as Latin forms due to his Catholic upbringing. Yet, as Makridimas eloquently put it, “the poetry of Papatsonis is not a matter of externalizing the Christian doctrine in terms of catechism, but instead depends on the mystical, almost ritualistic search for a naturalistic fullness, which allows the exploration of the emotional side of language”.

His poetic style is often obscure and impenetrable; for he relies on what he has described as a peculiar combination of "neo Christianism" and a mysticism akin to surrealism. His images, often highly personal, even idiosyncratic, are self-conscious and difficult to decipher. Papatsonis believed that beauty lives in the transformation of myth and symbol into philosophy; this belief helps to explain the prose-like flow of his work and his reliance on ''faith and vision" as poetic determinants.' His poetry is always rich in imagery and subtle ambiguities. Papatsonis himself was convinced that the religious label was suffocatingly binding for the general definition of his work, and rather preferred his inclusion in the field of metaphysics.