Rebetika is the urban popular Greek music of the poorest classes of the first half of the 20th century. As of December 2017, it is inscribed on the Representative List of the Intangible Cultural Heritage of Humanity created by UNESCO. Rebetika: Songs from the Greek Underworld [Komboloi Press (1975), Aiora Press (2014)] samples these urban folk songs, which are the creative expression of an urban subculture whose members the Greeks commonly called rebetes.

These rebetes were people living a marginal and often underworld existence on the fringes of established society, disoriented and struggling to maintain themselves in the developing industrial ports, despised and persecuted by the rest of society. And it is the hardships and suffering of these people, their fruitless dreams, their current loves and their lost loves that these songs are about, and underlying them all, their jaunty, tough will to survive. 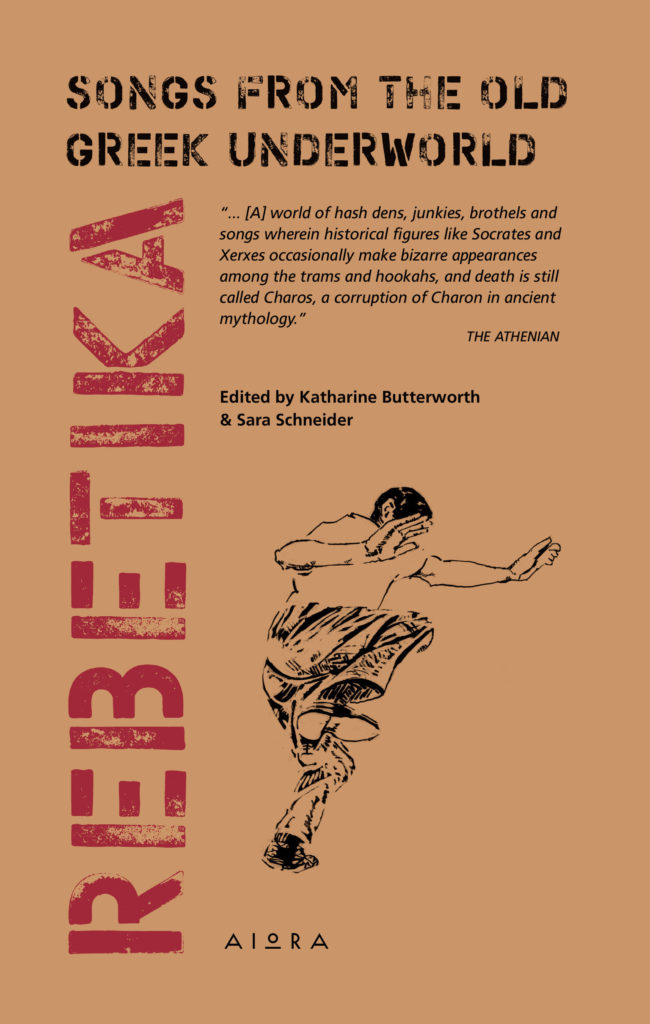 In the words of Elias Petropoulos, folklorist and urban historian, “the rebetic songs are the most accessible source of information about the life and attitudes of the rebetes. They contain a variety of themes: love, poverty, jail, the underworld, death, hashish etc, but about half the songs are concerned with love, particularly lost love and unrequited love”. An important characteristic of these songs is that dance is an integral element along with the music and lyrics, and it must be considered as such. Equally important is the language. The rebetes spoke and still speak their argot, which is exceptionally rich in expressions and hand gestures. The songs draw both from this argot as well as from the language of the working-class Greeks, and it is this mixed language that constitutes the poetic expression of rebetika.

The first edition of Rebetika was published shortly after the fall of the military junta (1967-1974). Censorship, existent at the time (it was only abolished under the new Constitution of 1975), had obscured many details of the long history of rebetic songs, and research on the topic was for the most part taboo. Nevertheless, Katharine Butterworth and Sara Schneider, editors of this first ever comprehensive English-language compilation of rebetika, succeeded in offering foreigners an insider’s view into the universe of the songs of the old Greek underworld. The book delivered and became a modern classic.

Several years have passed and times have changed. The importance of rebetika has been recognized, at least in Greece, and considerable research has been conducted, but the validity of the abundant information contained in the work remains impressively unaltered. Aside from the lyrics of more than fifty songs, with Greek and English parallel texts, it includes informative essays by prominent experts in the field of highlighting specific aspects of the rebetika, as well as a glossary of Greek words with no exact equivalent in British or American culture.

This second revised and updated edition of Rebetika aims to help a new generation of foreign readers of the 21st century orient themselves in the intriguing “world of hash dens, brothels and songs wherein historical figures like Socrates and Xerves occassionaly make bizarre appearances among the trams and hookahs, and death is still called Charos, a corruption of Charon in ancient mythology”.

The appeal of these songs, often compared to the American blues, is that the conflicts they express are not exclusively Greek conflicts, they are everybody’s; and they are still unresolved — in urban Greece as in urban Anywhere. Many young people from all over the world who come to Greece learn these songs and sing them, and in singing them recognize echoes of their own malaise and the problems that trouble us all. In the words of Katharine Butterworth and Sara Schneider, “our purpose in putting this book together is to carve a small opening in the barrier compounded of music, language, and culture that has limited rebetic songs chiefly to Greece”.

Also read: Rebetiko music: From the margins to the mainstream; "Rebetiko" Art Exhibition in Athens