Aristides Hatzis spoke to Rethinking Greece* about his department research and academic performance, his initiative to launch the Greekcrisis.net blog, the liberal heritage of Greece and the study of liberal political thought in Greece, the need for pro-free market reforms in Greece, as well as the state of today’s centre-right political parties in the country.

You teach Law & Economics and Legal Theory at the University of Athens. What are the dynamics of academic research of this particular field in your department (History & Philosophy of Science) and in Greece generally? What do you think is the level of the study of Philosophy & History of Science in Greece and what are the career prospects of Philosophy graduates in the country?

I am teaching law & economics at the Law School and Legal Theory at my department, the Department of History & Philosophy of Science. This is not a new department. It was established, more than two decades ago, in 1994. It is justifiably considered, academically, one of the best departments in Greece. This is not a subjective view. It was the conclusion of the external evaluation report for my department: “The Committee’s overall assessment of the Department is very positive. It is something of which the University of Athens and the Ministry of Education should be proud.” This is the result of an emphasis on academic excellence, a close, almost personal relationship with the students, a curriculum which is up-to-date and an atmosphere of tolerance and cooperation. One wonders what’s the future of a philosophy graduate in a country with almost 60% unemployment among the young. Happily, our students are regularly being accepted in graduate programs in many areas, in Greece and abroad. Their employment rate is more than the average and they are among the most satisfied students in Greece with the level and quality of their studies. Unfortunately, our students with the most impressive careers don’t live in Greece anymore.

My course is a mix of legal theory, political philosophy and institutional theory. It is a course on the history of the liberal constitutional democracy and the development of the rule of law, from Ancient Athens to the early 20th century. With references to the issues of the freedom of speech, the debate on self-ownership and human dignity, the relationship between law and morality (with a lecture dedicated to Nuremberg trials) and economic inequality. In this course and a sequel, in the form of a seminar, we deal with all the above plus current issues, like the integration of Muslims in western societies, police violence and torture, the freedom of the press and the contradictions in a liberal democracy. Every year we see 8-9 movies, we attend at least one theater play and the students organize 12-18 debates.

Law & Economics is my area of research for the past 25 years. I got my doctorate on law & economics from the University of Chicago under the supervision of Judge Richard Posner. Law & Economics (and the economics of institutions in general) is a relatively new field of study. It tries to answer questions like, what’s the suitable institutional framework for economic development, how to make the justice system more efficient, how to interpret legal rules in contracts, torts, antitrust in order to regulate behavior successfully. The Law and Economics approach is the opposite of a stagnant and barren legal formalism, which is still dominant in Greek legal theory. However, for the past ten years a great number of young scholars, colleagues, lawyers and judges are interested in the field. We have a rather large and lively community and we organize a very successful annual conference for young scholars.

One last word about research. Research in Greece is like a hurdles race, especially in social sciences. It is underfunded, you can’t organize a lab, you can’t help young scholars, you can’t invite a colleague, you can’t travel to major conferences, you have to spend most of your time in clerical work. I am trying to minimize cost by integrating my research and my teaching. This has some beneficial side-effects. My first audience is my students. And the feedback is invaluable. 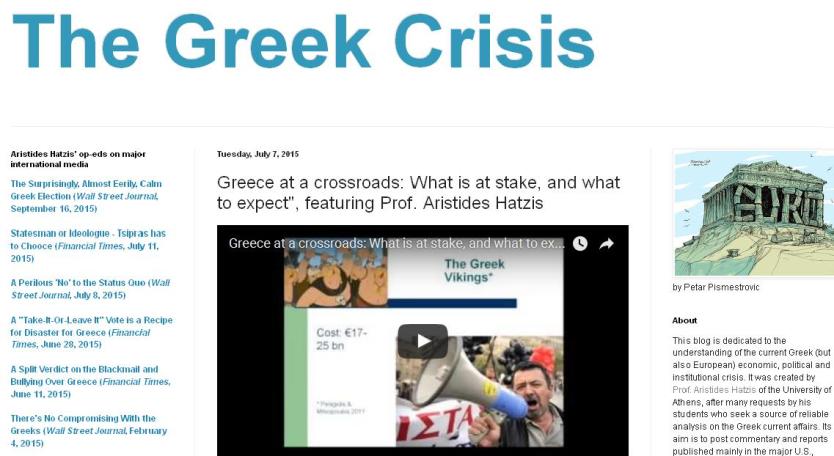 You have launched the GreekCrisis.net blog which offers a variety of perspectives into the Greek crisis, mainly through International Press articles and commentary. Can you tell us a bit more about this initiative? How do you assess the public’s response to it?

This is a joint project. We started it with Dr. Yulie Foka-Kavalieraki, my wife, 6 years ago. It started very modestly, as a clearinghouse of information for the Greek Crisis. The great success was rather shocking to us. I remember that in the summer of 2012 we took some time for vacation and we started receiving emails from hedge fund analysts, bank managers and journalists asking us why “our service” had stopped. We have now 3.200.000 individual visits, almost 13.000 posts and a faithful audience. You can also find there all my opinion pieces published in the New York Times, the Financial Times and the Wall Street Journal but almost everything you need to know about the Greek Crisis, including bibliography. Funny, and not expected, fact: only 14% of our visitors are Greeks! This is a public, pro bono service. We don’t have any kind of help, we don’t receive any kind of funding or donations and we don’t have advertisements. Our only hope is for this blog to become redundant. But I am afraid that this crisis will last longer than expected or feared.

It seems that there is a growing interest for the study of the liberal political thought and particularly British - American liberalism in Greece, reflected in initiatives such as the Liberty Forum of Greece and the John Stuart Mill research group, among others. Is it a trend, or a phenomenon with deeper roots?

Greece had a very strong liberal tradition, especially in the 19th century. Greece was founded as a liberal democracy by liberal politicians with strong ties and personal relationships with leading liberal intellectuals and politicians in Britain, France, Italy and the U.S.A. Unfortunately, this tradition was forgotten under the fever of the irredentist nationalism of Megali Idea for many decades and then by the bloody antagonism between communist left and conservative right after World War II and the ensuing ferocious civil war. After 1974 a number of liberal intellectuals tried to reintroduce liberal ideas in Greece, after almost a century. They had their failures but they managed to create a fertile ground for such ambitious initiatives as the Liberal Forum of Greece (of whose scientific board, I am a member) or the “John Stuart Mill research group”, another project my wife and I founded and organized with the help of my current and former students. Its success was unprecedented. We have 1.200 members, mostly students (from every Greek university) and young professionals, 70% of whom are young women. Our events are so successful we keep booking ever larger venues. This is also an initiative based on purely voluntary work. We don’t receive any funds, our events are free, we don’t have a budget.I believe that classical liberal ideas are going to exert a much greater influence in the not-so-distant future in Greece. Because these are ideas of the open society, emphasizing liberty, rationality, individual rights, the rule of law, political equality, free competitive markets and civil society. Greece is deficient (more or less) in all the above and this is the root-cause of its problems. The modernization of Greece entails embracing these ideals.

How can we assess Greece performance taking into account its liberal heritage? And what is the depth and quality of Greece’s bond with Europe and its ideological and political dilemmas?

Greece was not only founded as a liberal democratic state, but also as a genuine European state. Of course there was always a great gap between political ambition, intellectual wishful thinking and the grim reality of a backwards society. Nevertheless, the Greek political elites managed (with a few exceptions) to keep Greece in the right side of history – “right” also meaning “winning”. The young Greek state was attached to the British empire, when the empire was powerful. In every European conflict Greece was always with the winning side (Balkan wars, World Wars, Cold War). Greece became member of the most privileged and powerful “clubs” (recently NATO, OECD, European Union, Eurozone). That is why Greece cannot imagine itself outside of European integration, even when this process has serious structural problems, even when Greek people are dissatisfied with their partners. Greece’s ambition has always been to be a part of the Western Europe. This was a challenging ambition but a wise and worthy one.

What kind of reforms does Greece need? And what is the reform capacity of the Greek society and the Greek political system, especially under the current circumstances?

Greece still has the least free economy in the European Union, one of the less free economies in Europe. It is still not competitive, despite the steep decline in labor cost, because it is also not supported by an economically-efficient institutional framework. The administration of justice is ridiculously slow. You need 4,5 years to enforce a contract, 3,5 to finalize a bankruptcy procedure. It is still hostile to investment due to overregulation, corruption, a nefarious macroeconomic environment, a banking system in disarray, costly energy and substandard infrastructure. Greece needs urgently radical pro-free market reforms. Unfortunately, this kind of reforms have very powerful enemies, the strong pressure groups – in the case of Greece and in order of importance: powerful cartels, professionals and public sector unions. Most Greek identify reforms, erroneously, with the extreme fiscal measures (tax hikes, across-the-board salary cuts) which were both inefficient and unfair. Consequently, we have the phenomenon of “reform-fatigue” without real reforms.

How would you translate the state of the liberal political ideology and centre-right political parties in Greece today? What does it mean for New Democracy as the main opposition party to have Kyriakos Mitsotakis in its helm? What are the consequences for the Greek political spectrum?

Kyriakos Mitsotakis’ election was a surprise to me. He is the first leader of the conservative party who can be characterized as liberal, after 23 years. However, I should emphasize that the party is not liberal. The liberal faction is rather weak and marginalized. Mitsotakis was elected by the Greek centrists who went enthusiastically to vote for him. He has to control his party and establish his dominance to win the elections, especially if the next elections are close. I think that his most important contribution would be to transform the party into a genuine European center-right party with a strong liberal element.

His election challenges the undisputed political hegemony of Alexis Tsipras (winner of four elections in a row). Now Tsipras has a formidable opponent. Mitsotakis can become Prime Minister in two ways. By behaving opportunistically, waiting political cost to undermine Alexis Tsipras or by persuading the Greek people that the liberal alternative is the only real alternative for growth, jobs, and the restoration of the rule of law and Greece’s reputation. The second option is the most difficult, but at the same time the most rewarding and sustainable.