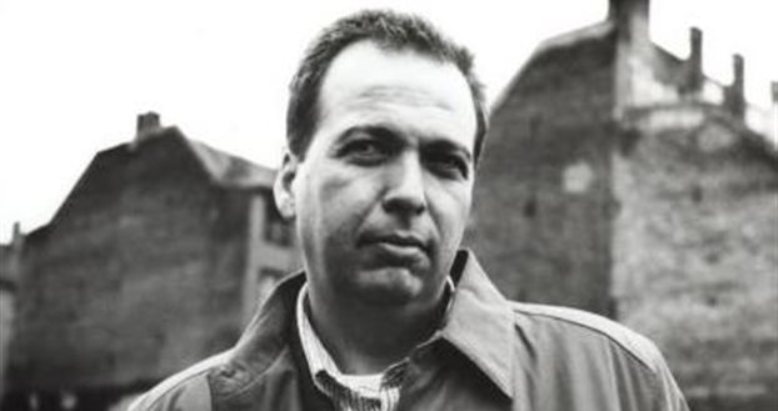 Professor Pechlivanos has taught at the Aristotle University of Thessaloniki and, as a visiting professor, at the Universities of Munich, of Cyprus, and at the EHESS, Paris. His research interests include the theory and history of reading and literary communication, the history of knowledge and the reception of Enlightenment and Romantic ideas in modern Greek culture, the Modern Greek novel, and the history of Greek-German cultural transfers.

Miltos Pechlivanos spoke to Rethinking Greece* about CeMoG's activities and agenda, the cultural relations between Germany and Greece, Greece’s intellectual history, the German public sphere and Greek exceptionalism discourse in times of crisis, as well as about the need to re-conceptualize Modern Greece by incorporating her tensions and distinct traditions.

How does the ongoing crisis affect German students’ and scholars’ interest in Greece? Can you offer us an insight into the Center for Modern Greece goals and activities?

As we are dealing with a number of successive "crises", my answer must differentiate distinct levels. The ongoing financial and monetary crisis, the ensuing crisis in Greek-German relations and of course the crisis of refugee flows have brought Greek affairs  at the centre of the German public sphere. And we should not forget that negative publicity is still publicity: the number of students interested to know more about Modern Greece is increasing (at this point we should add a new factor: the students - members of the so-called "new migration" to Germany due to the economic crisis). This visibility of Greece is reflected in the growing media interest in the country, in the number of scholarly publications, the public interventions of economists, as well as the ongoing research carried out by fellow colleagues from sociology and political science (some of which is carried out with the cooperation of German and Greek academic institutions).

Modern Greek Studies in Germany certainly include an agenda for the cultivation of Greek-German relations and the last seven years have set an urgent challenge for a systematic study of the history of these relations and its various distortions which of course include persisting stereotypes. I can not refer here in detail to the numerous CeMoG relevant initiatives, conferences and publications but one can trace them in the Centre's website: www.cemog.fu-berlin.de

CeMoG itself was established in 2014 at Freie Universität Berlin thanks to a Stavros Niarchos Foundation grant but also owes its creation to this new bilateral reality: the will to build and strengthen scholarly and cultural networks between the two countries, the need for organized dialogue and interdisciplinary-intercultural mobility promotion as well as the need to systematically study the common Greek-German history. CeMoG’s projects include, inter alia, organization of conferences, financial support for young researchers, the construction of an online and open access encyclopedia of Greek-German relations and exchanges, and the Edition Romiosini publishing program and digital library that focuses on translations of seminal Modern Greek literature oeuvres as well as various studies of Modern Greece. 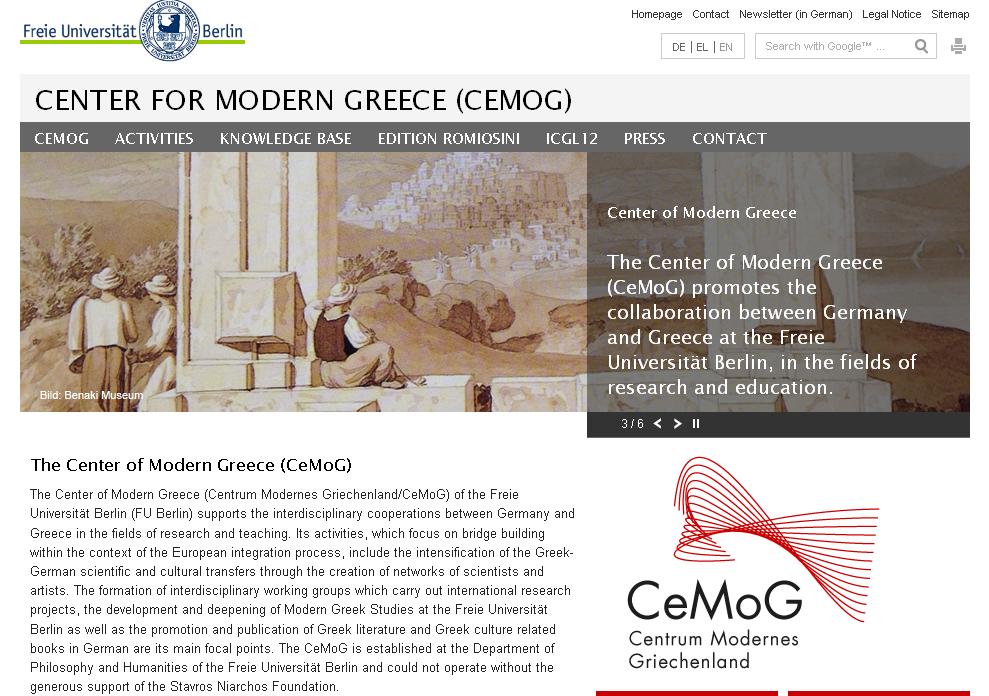 Are there any parallels between Greek and German cultural identity? What is the significance of German Romanticism for Greece’s self-understanding?

“Cultural identity” as such is subject to negotiation, it cannot be perceived, in my opinion, outside the history (and the stories) of cultural mobility and transcultural transfers. The members of the Rum millet (the Orthodox Christians of the Ottoman Empire) in order tο “become” Greeks in the 19th century, met with classicist Graecomania and Philhellenism as well as with the romantic nationalism of the Germans, that themselves strongly needed the classical Greek Ideal to construct their own “cultural identity”, as opposed, say, to French enlightenment and revolution. Greek intellectual historian C. Th. Dimaras has adequately stressed the importance of Greek 19th century intellectuals “meeting” with Herder, Heine and Nietzsche. On the other hand, we should not forget that Dionysios Solomos’ (considered the national poet of Greece) legacy, that "The nation must learn to regard as national what is True" (‘Το έθνος πρέπει να μάθει να θεωρεί εθνικόν ό,τι είναι Αληθές’) has been inspired after Solomos’ acquaintance with German idealism through Italian translations: His seminal poetic composition "The Free Besieged" (1826–1844) emerges from such creative, and never only bilateral, European routes.

CeMoG’s cultural events have included a major conference on 20th century Modern Greek Philosophy (September 2014), an area little known to Modern Greek Studies scholars, but quite important in terms of Germany’s influence on Greece’s recent intellectual history. Would you like to tell us more?

This special conference (Deutschland und Griechenland im Spiegel der Philosophiegeschichte. Transfers im 20. Jahrhundert) was organised by CeMoG after the meeting of the President of the Hellenic Republic, Karolos Papoulias with the President of the Federal Republic of Germany Joachim Gauck and the signing of the joint declaration for the establishment of the Greek-German Youth Foundation in Berlin (September 2014). The joint declaration followed the tribute paid by President Gauck at the monument of the village of Lygiades, where German troops executed 92 civilians, 34 of them children.

While in other cases we chose to focus on the World War II memories with talks about the German occupation and war crimes in Greece (as for example in autumn 2015 in cooperation with the Topographie des Terrors foundation in Berlin), in September 2014 we tried to see the Greek-German relations through the mirror of the history of philosophy. The conference was conceived as a vehicle for reflection upon European identity in Modern Greece putting forward the question of the reception of German philosophy. Presentations and discussions focused on the work of Greek mid 20th century Neokantian philosophers like Constantine Tsatsos and Panayotis Kanellopoulos, but also of later prominent figures like Panagiotis Kondylis and Kosmas Psychopedis, as well as on the fortunes of the Frankfurt School and Western Marxism in Greece. The conference proceedings will be published soon in Edition Romiosini publishing program.

"Drifting Cities", Stratis Tsirkas’ Greek modernism classic, was recently translated in German by CeMoG’s Romiosini Editions, inaugurating a new series on Greek fiction and academic literature. Why is Tsirkas’ work important for Modern Greek literature and do you think it will appeal to the German reading audience?

CeMoG’s Edition Romiosini took over from the earlier Romiosini Verlag in Cologne, through which Hans Eideneier and Niki Eideneier-Anastassiadi have been contributing to the translation of Greek literature into German since 1982. Not only will the editorial program of the Romiosini Verlag in Cologne be partly overtaken and published anew (in the first half of 2016: Stratis Myrivilis’ Life in the Tomb, Dido Sotiriou’s Bloody Earth, Mimika Kranaki’s Philhellenists, Mary Iordanidou’s Loxandra and Sotiris Dimitriou’s To hear your name well), but also new translation projects will be launched among which many non-fiction titles like Yannis Voulgaris’ monograph on post-dictatorship, democratic Greece 1974-2009 and Rika Benveniste’s Those who survived on Greek Jews who survived from the Holocaust. All titles of Edition Romiosini/CeMoG are offered free of charge for online reading and can also be obtained as a printed edition (Book-on-Demand) and some of them as an E-Book as well. We try to take advantage of all the possibilities of digital publishing seeking the greatest possible visibility for our books.

The Edition Romiosini started its journey in December 2015 with Stratis Tsirkas’ Drifting Cities. First of all, to correct an unwarranted lack of the German book market - this is a classic text of the modern Greek (and, in my opinion, European) prose that should be made available in German. In this emblematic trilogy about Greek conflicts in wartime Egypt Stratis Tsirkas reflects upon the postwar fate of modern Greece. It comes as no surpise that the trilogy was established as one of the main literary reference texts for Greek readers after the dictatorship. And one more thing: following the other leading writers of the Greek Diaspora, i.e. Ionian Islands native Dionyssios Solomos, Alexandrian Constantine Cavafy and Asia Minor descendant Giorgos Seferis, Stratis Tsirkas from Cairo succeeded in upgrading Greek literature and transforming the literary idiom of the Hellenic Diaspora into a constant quest for self-consciousness.

How the German reading public will receive this difficult book only time will tell. The first indications, however, allow for optimism, and I’m referring to the recent review in the Neue Zürcher Zeitung. Readers of demanding literature, as we read there, can now associate North Africa’s war front, not only with Rommel but also with the Greek of the Diaspora Stratis Tsirkas whose Drifting Cities can be situated in the same line with Sartre’s Les chemins de la liberté and Malraux’s L'Espoir. 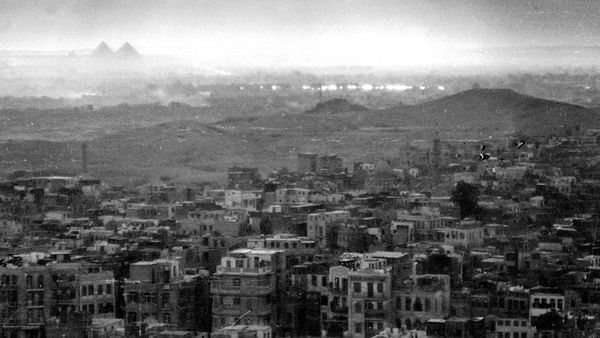 Many aspects of Modern Greek history, culture and society are seen by prominent public intellectuals as exceptional, both inside and outside Greece. How do Modern Greek Studies internationally, and especially in Germany, reflect upon this view?

I may, rather spontaneously, refer to the title of a conference in Princeton in 2007: „Against Greek Exceptionalism“, or use Constanze Güthenke’s and Dimitris Papanikolaou’s project on „Questioning Greek Exceptionalism“. Or to cite an important position in C. Th. Dimaras‘ History of Modern Greek Literature, Greek culture "is expressed through the constant renewal that is caused by contact with foreign cultures". Its special character is the result of these rich and varied influences and contacts. In contrast «exceptionalist arguments produce inadequate history, limited self-understanding, and arrogant politics» (Mary Nolan) and can impede the opening of Modern Greek Studies, both inside and outside Greece, in the direction of comparative analysis, the study of cultural exchanges, and the search for wider reference frames and interpretative schemes.

German media narratives about Greece and the Greek national character seem to be instrumental in Germany’s policy toward the country and Europe. Can public/cultural diplomacy have any impact on the stereotypes involved?

The German public sphere has been flocked by unhistorical and populist images for the “other”. Greece and the Greek national character have been portrayed as “exceptional” or marginal in ways that prepared the ground for a “Grexit”. We should off course fight against these stereotypes by presenting images which are closer to reality: CeMoG is serving this goal with a variety of events and publications. We have also to study this crisis of representation in the public sphere in Germany and Greece and we should analyze the relevant stereotypes by using discource analysis and  media sociology. Thus we are preparing a special Workshop to take place this May, where a project of the University of Crete and the Freie Universität Berlin will be presented (The Greeks, the German and the Crisis: Discursive actor attribution analysis of the Eurozone crisis debate / GGCRISI) with the participation of Greek and German journalists.

How can we rethink Greece and the cultural relations between Germany and Greece through the current debates about Europe’s crisis and future prospects?

“Rethinking Greece” means to my understanding to re-conceptualize Modern Greek history, literature and language in a multifaceted manner, i.e. to enhance all possible perspectives through which we can read Modern Greece. Tensions and disharmony between our distinct traditions, scholarly and popular, classical and Hellenistic, Roman and Byzantine, Ottoman and Balkan, Mediterranean and European can all be incorporated and reflected upon. Only if we reflect on Cavafy’s “We 're a mixture of races here: Syrians, Greeks, Armenians, Medes” (In a town of Osroene, 1917), taking steps beyond nationalism, we can build a cultural policy, suitable for the current circumstances where Europe in the face of the refugee crisis, by invoking exceptionalism, seems to betray its founding principles.