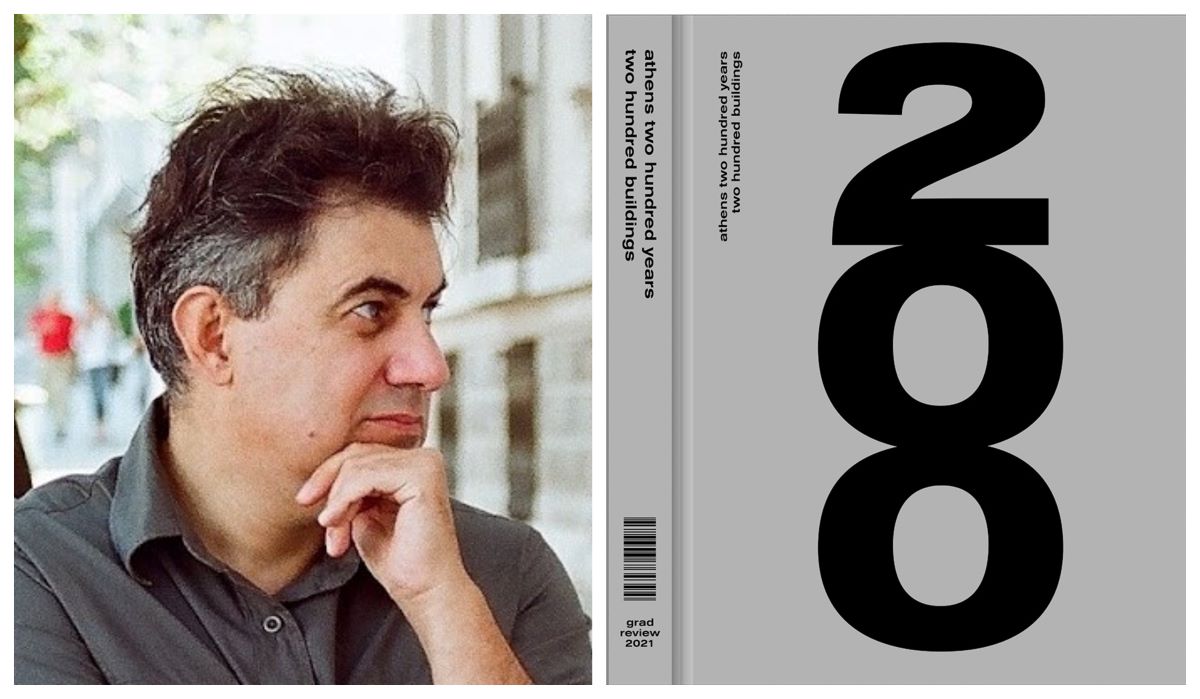 “Athens: Two Hundred Years, Two Hundred Buildings,” is a photo album book that aims to be visual record of Athens’ evolution from the first years of Greek independence to today. The 330-page book features 200 selected buildings of Athens, from 1821 to 2021, as well as eight essays on architecture in Athens by architects and historians of art and architecture – Yannis A. Aesopos, Manos Biris, Marilena Z. Cassimatis, Maria Daniil, Helen Fessas-Emmanouil, Stylianos Giamarelos, Francois Loyer and Kostas Tsiambaos. Architect, publisher of e-magazine grad review and lecturer in Interior Architecture at the University of West Attica,  Manolis Anastasakis edited the book and selected the 200 buildings presented there. He spoke to Rethinking Greece* on the criteria for selecting the 200 buildings, the most interesting period of Athens’ architecture, whether the Athenian 'polykatoikia' [apartment building] can be redeemed, Athens' place on the map of world architecture after the previous two decades of extroversion, and finally the challenges and opportunities for its architectural development in the years to come.

What were the criteria for selecting the buildings? Can you tell us about two or three that you personally single out?

The book was published on the occasion of the 200th anniversary of the Revolution of 1821, and its aim was to highlight the architectural variety of the capital of the Modern Greek state. The main criteria in the selection of buildings were the unique architectural value of their façade and their continuing presence in the city to this day. Obviously, we could not include everything, and some very recognizable and remarkable buildings had to be omitted on account of the "anniversary" limit that was set, namely 200 buildings. Thus, if a building is not included in the selection, it does not mean it is not important. Moreover, secondary criteria were also applied, so that, for example, selected buildings equally represent different time periods, as well as all the important architectural currents and personalities with a strong presence in Athens throughout the last two centuries. Other selection criteria related to a balanced representation of their various uses (i.e., public buildings and mansions, private houses, churches etc.), locations (within the Attica basin, with few exceptions) and finally their historical value, in addition to their architectural quality.

The selection in the book is divided into five time periods, and for the buildings I single out I will chose one from each era. For the period of the formation of Athenian classicism (1830-1867), the Central Building of the University of Athens, designed by Danish architect Christian Hansen, is an example of beautiful proportions in a mild expression of classicism. For the period of late classicism (1868-1922), the Municipal Theater of Piraeus,designed by the architect Ioannis Lazarimos, pleasantly surprises with the expressive rhythm of its façade. The interwar period (1923-1945) is perfectly reflected in architect Vassilios Douras’ Tsimboukis apartment building, with the austerity and the intense horizontality of its openings. The first post-war period (1946-1979) is best expressed in the Lanaras weekend house by architect Nicos Valsamakis, as it harmonizes functionality with aesthetics and advanced technology. Finally, for the last period (1980-2021) I chose the Stavros Niarchos Foundation Cultural Center, designed by Italian architect Renzo Piano, because it succeeded in utilizing the gentle upward slope of the ground to create a public park space for everyone. 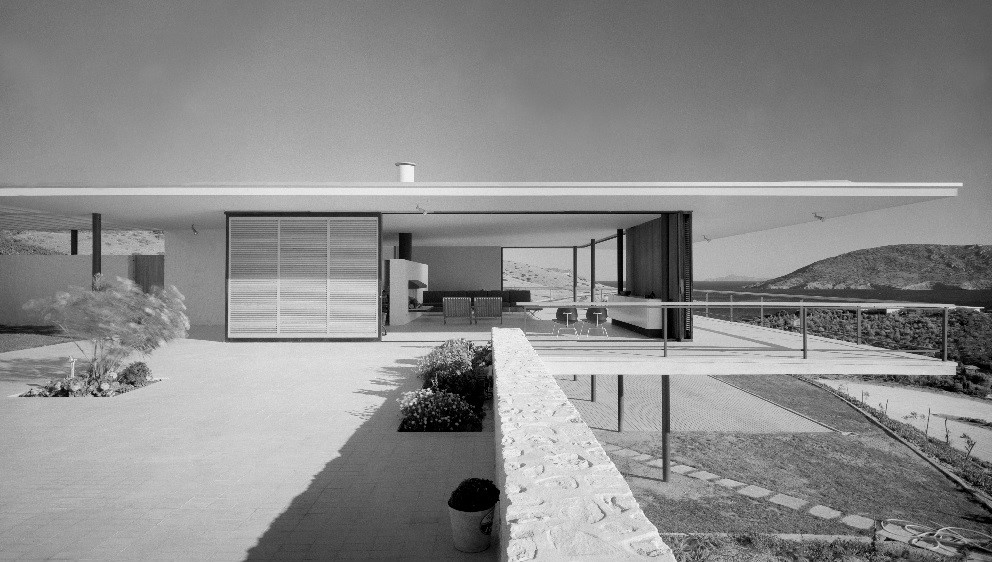 As you mentioned, the presentation of the 200 buildings has been divided into five chronological periods. Which do you think was the most interesting period in terms of architectural creation in Athens?

The duration of each period in our book spans the equivalent of one to one-and-a-half generations, so that the changes in the landscape of architecture may be evident. Each period showcases excellent works. However, the one that stands out for me is the first period, the formation of Athenian Neoclassicism (1830-1867), when the first major public buildings, such as the Old Palaace [now the Greek Parliament], the University of Athens and the Academy – among many others – were erected. These buildings, designed by important and world-renowned architects served as archetypes for the next generation of significant public buildings of the city, as well as for the private homes of the middle and working classes. These architects, who came to work in Athens in the 19th century, were invited to design buildings in the European Neoclassical style in the heart, however, of ancient Greek culture. The way these prominent architects re-interpreted classical models in a modern setting led to the emergence of an Athenian strand of Neoclassicism that was of high architectural quality.

Is Athens an architecturally misunderstood city? Could it claim a place on the map of world architecture?

Athens is certainly misunderstood by its inhabitants, although its image as that of an "ugly" city appears to be on the decline, especially among younger Athenians. As far as architectural tourism is concerned, the city boasts some remarkable buildings of 19th century Neoclassicism, a leading example being the Athenian trilogy that comprises the University of Athens, the Academy and the National Library. There are also some exquisite examples of 20th century modern architecture, like the Athens Hilton, the main building of the former Ellinikon International Airport, and the American Embassy – designed by none other than the Walter Gropius. The 21st century began with great architectural claims for the city, and I am referring here in particular to the Stavros Niarchos Foundation Cultural Center, and the Agemar Angelicoussis Group Headquarters in Kallithea. In terms of urban landscape, apartment buildings are the hallmark of Athens, and in this respect the city has a very strong urban identity, created after WWII. I have to mention that foreign architects visiting Athens are impressed by the homogeneity of its urban environment and the fact that it is a friendly and extroverted city. 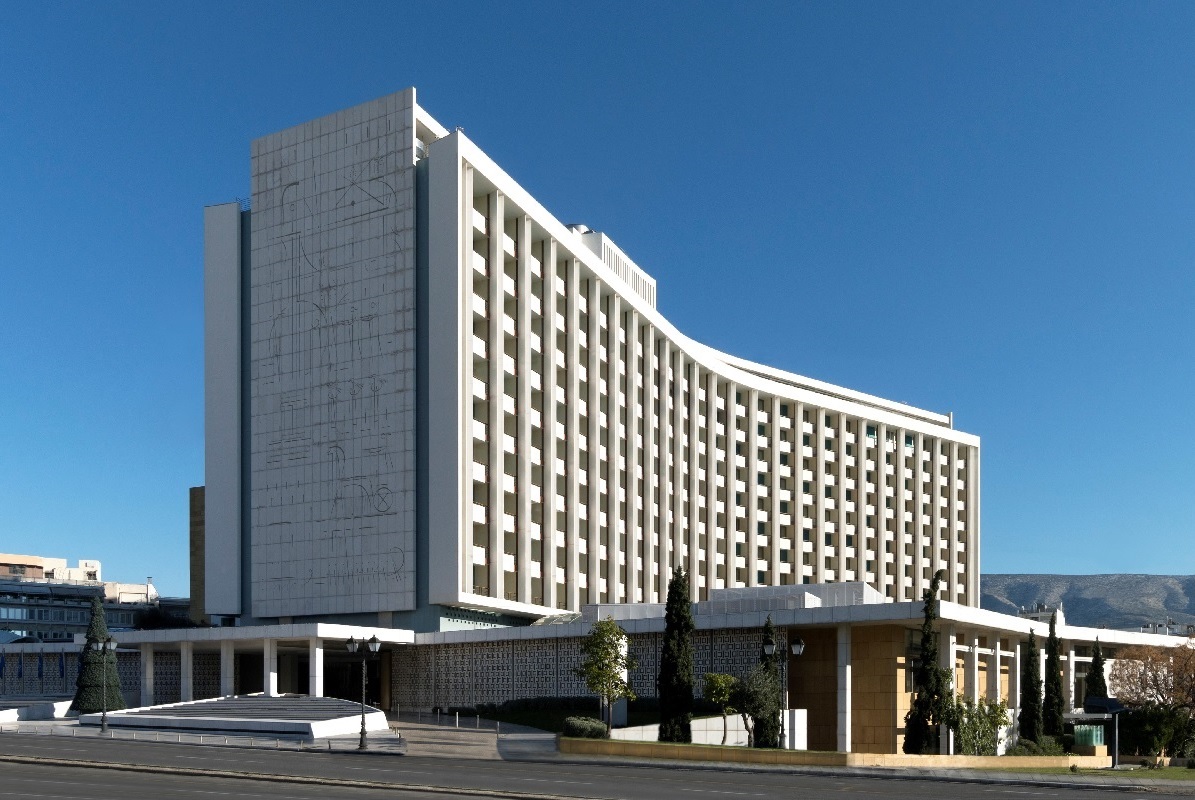 The Hilton, Greek arquitecture in the 60s | photo: Vassilis Makris

The infamous ugly Athenian polykatoikia [apartment building] is being ‘rehabilitated’ in public opinion, while at the same time we are witnessing a renewed interest in the modernist buildings of the city. What is the verdict, are Athenian apartment buildings beautiful or ugly?

The question of whether a structure is beautiful or ugly could indeed be asked of individual buildings. When it comes to an urban landscape however, the question is infinitely more complex. Athens underwent a rapid development in the post-war period, so a degree of standardization in construction was to be expected. We must remember that this rapid urbanization took place within an environment of limited available capital and small properties. This was the system of antiparochi, the hallmark of post-war urban development. When examining apartment buildings individually, the majority of them do not claim laurels of architectural quality. But if we consider them as a set of structures that largely make up the urban environment, then they become a characteristic feature of a city. There are, of course, fine and distinctly unique architectural examples of apartment buildings, both from the interwar period (such as the "Blue" apartment building, the Michaelides apartment building, etc.) and the post-war period (such as the apartment building at 118 Emm. Benaki steet and the apartment building in Polydroso). 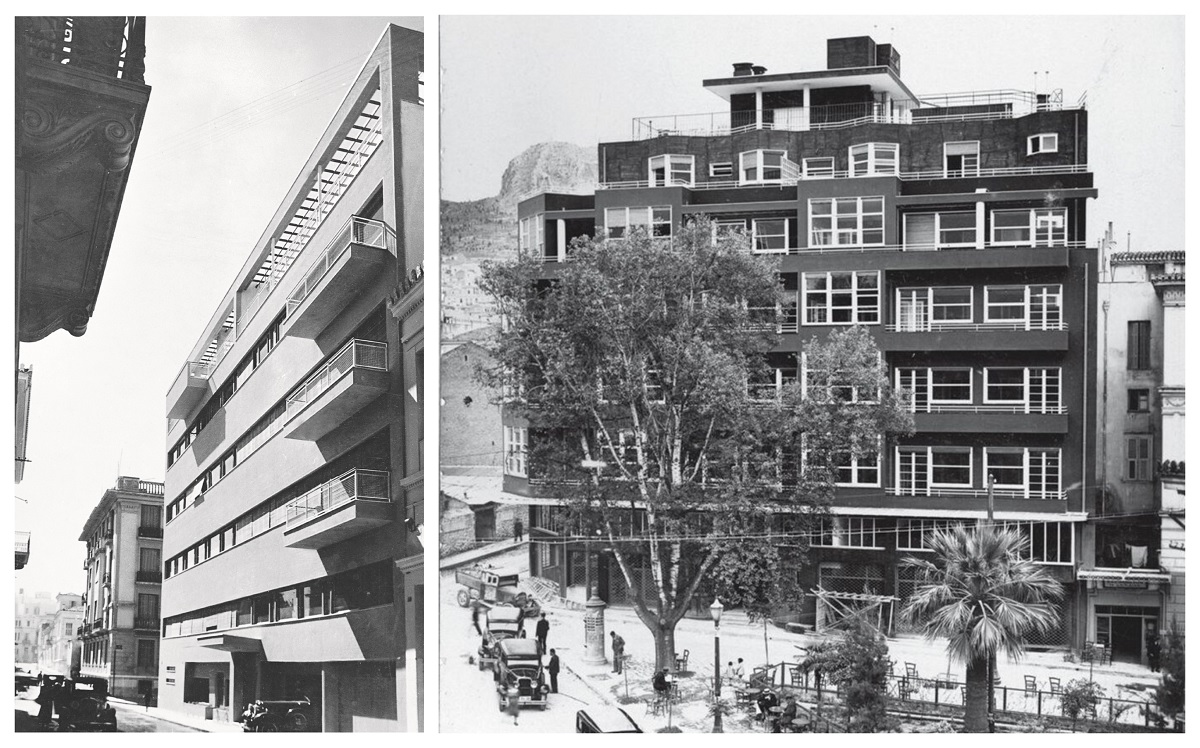 Public interest in midwar Athenian modernism is growing:  The Michailidis Apartment Building  designed by Thoukididis Valentis; the famous "Blue" Apartment Builing designed by Kyriakos Panagiotakos
According to the book, from 1999-2000 onwards, Athenian architecture has become more extroverted. Significant new public buildings were erected on the occasion of the 2004 Olympics (Benaki Museum at Pireos 108 , Acropolis Museum, Ethniki Insurance Building at Syggrou) while after 2010, in the midst of the crisis, two large cultural centers were created, the Onassis Stegi of Letters and Arts and the Stavros Niarchos Foundation Cultural Center. What is the impact of these recent developments?
The period of the Olympic Games was a largely unexploited opportunity for the architecture of the city, with the exception of the buildings you mentioned, as well as the facilities of the OAKA Olympic Stadium. In recent years, we have been witnessing a trend to revise the prevalent type of apartment buildings with very interesting results. Indicative of this trend are the "inside-out" apartment building in Neo Psychiko and the "wave" residential building in Glyfada. There are also some very interesting proposals in the construction of town houses. As regards buildings with a public character, the Onassis Stegi of Letters and Arts and the Stavros Niarchos Foundation Cultural Center that you mentioned are remarkable. I believe that the foundations have been laid for the architecture of future developments in Athens to be of the highest quality. However, the biggest construction project appears to be, due to its size and importance, the “Ellinikon" [a project to develop the site of Athens' former international airport]. From what has been published so far it appears that the overall planning as well as the specific designs meet high quality standards. 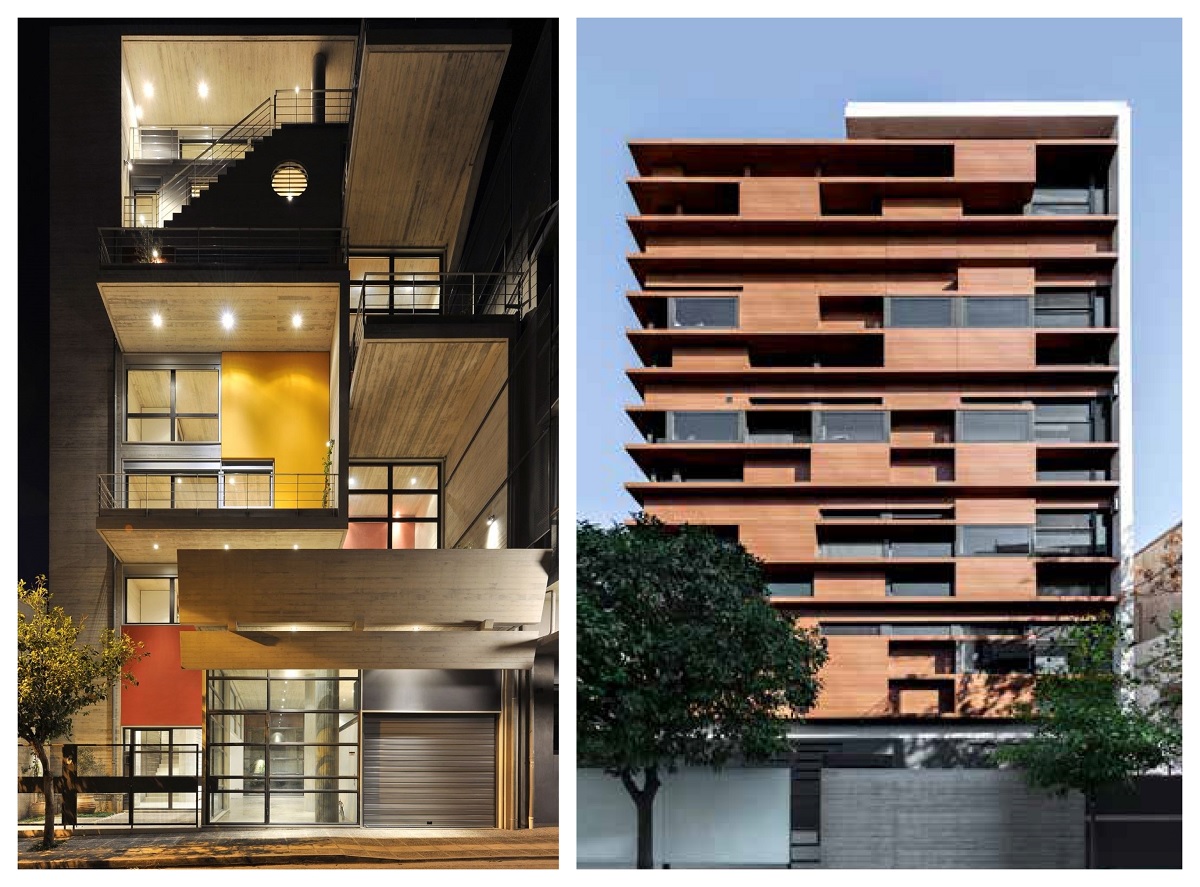 Athenian polykatoikia revisited during the 2000s: The "Box" at Gazi neighbourhood | photo: Haralambos Louisidis, "Inside out' at the suburb of Psychiko | photo: Marianna Bisti

The 1960s and 1990s were marked by an economic boom that led to the urbanization of the Athenian landscape. What are the current challenges for the architectural development of Athens?

The big challenge for Athens now lies in the successful accomplishment of the plans for the development of the "Ellinikon" and the so-called "Athenian Riviera. If these two enormous challenges are successfully realized, they can make the city much more attractive to its residents and visitors. At the same time, it is imperative that the city invests in the development of green areas (it is among the capitals with the lowest percentage of green space in Europe), in the upgrading of public spaces (squares, sidewalks, quality of urban equipment), in the coastline and in its connection with the sea, as well as in targeted small "urban acupuncture" interventions in its neighborhoods.

Is there such a thing as “Modern Greek architecture”?

I find it more accurate to talk instead of architecture in Greece. From the 19th century onwards, the trends in architectural expression are more internationalized. Athenian Neoclassicism was formed within the movement of the then dominant European Neoclassical architecture. Similarly, interwar Modernism in Athens developed as part of the international Modernist Movement in architecture. In every time period, of course, we find singular characteristics that appear due to the particular circumstances of a place, such as the existing social structure and the rules and methods of construction. Modern architecture in Greece now is in line with dominant international trends.
Overall, there is no prevalent architectural theory or definitive style that characterizes this period we are going through. Multiple sensibilities and expressive possibilities coexist. We could mention certain general directions which however every architect can choose from and express in her own way. The design of green buildings has now become more or less a requirement. Green façades, planted rooms and roofs are some of the possibilities. Metal frame constructions are coming to the fore again with new materials which incorporate bioclimatic parameters. Creating buildings with dynamic façades [also known as a responsive façades, building exteriors that can change in response to its surrounding environment], allow both the synthetic handling of the building's skin and the control of the environmental conditions. All of the above are filtered through our social, economic and construction conditions and are articulated in a way that historians will record in the future.