The Fifth International Postgraduate Summer School ‘Cultures, Migrations, Borders’ organized by the Department of Social Anthropology and History of the University of the Aegean and the Institute of Migration and Ethnic Studies of the University of Amsterdam will take place on the border island of Lesvos, Greece, from 4 to 15 July 2016. The Summer School aims at bringing together students and researchers in humanities and social sciences with an interest in borders and migration. Its programme is designed to combine theoretical instruction by renowned instructors from five universities with various on-site activities. 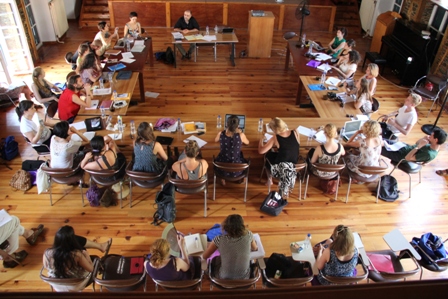 The broader socioeconomic and political transformations in Africa and Asia have recently resulted in increased migration flows to Greece and, more generally, to Europe. Situated at the crossroads of populations and cultures, the islands of the Eastern Aegean have served as one of the entry “gates” to Europe. In this context, and especially in connection to the current crisis, border crossings have become the focus of intense debates as they are entwined with issues of culture and identity formation, the European Union and state policy, and constructions of 'otherness'.

By drawing on an increasing interest in the study of cultures, migrations and borders, the Summer School examines how migrations shape and are shaped by processes of boundary formation in a variety of cultural encounters.

‘Cultures, Migrations, Borders’ is part of the wider “University of the Aegean Summer Schools” programme, offering a total of five Summer Schools this year in Crete, Lesvos, Samos, Syros and Delphi. For more information on this Summer School you may visit https://migbord2016.pns.aegean.gr/