The Agricultural University of Athens hosts "UniverSSE 2017" aka the 4th European Social Solidarity Economy (SSE) Congress. For three days in June (9-11/06) Athens becomes the European capital for Social Solidarity Economy and the participants propose sustainable alternatives in the landscape οf crisis. Delegates from 50 delegations from Europe are invited to discuss concepts, forms and fields of social solidarity, economy and cooperativism, responsible consumption, production and climate change. 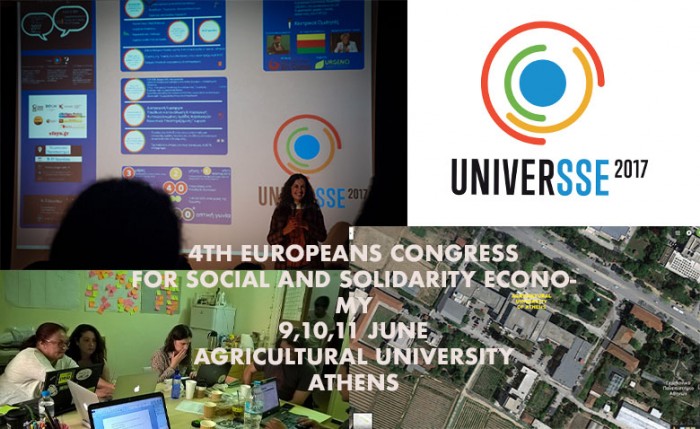 In addition, social solidarity initiatives towards refugees, social innovation and public policies promoting SSE, networking, marketing strategies, social impact and decision making process are some of the challenges that will be discussed during the Congress. The Congress is organized by RIPESS Europe and Komvos.The registration and the participation in the Congress are free of charge. You can register here and see full program here.

Promoting Social Solidarity Economy is a priority for the Greek government and this fall the Parliament adopted a law in order create a supportive legal environment its development. The new law expands the legal definition of SSE operators, while at the same time securing the core concepts of the coop culture: solidarity and parity between the members, participatory democracy in decision-making, development of economic activities that don't focus on profit but are able to offer workers a living wage and provide services to local communities. Furthermore, the law defines the procedure by which the government and the broader public sector will offer support to SSE entities, through open and transparent procedures, either by developing contracts, or by utilizing idle public property. Among the incentives and supporting measures to make sure that SEE operators are viable are tax deductions and exemptions.

The law puts in place a National Strategy for SSE, which, besides laying the groundwork for legal and institutional changes, establishes important supportive structures like the Regional Support Centers, which will provide free support and advice for those wishing to become active in SSE. Another supportive structure is the Social Economy Fund which, in the next three years, will allocate at least 157 million euros for the creation of new jobs and start-ups, as well as one-stop-shops supporting potential SSE practitioners. The Fund will become an active supporter of SSE ventures by making financial tools avaibable to those that cannot access them now through the bank system, such as grants and repayable grants, microlending-microcredits or guarantees.

Komvos ('κόμβος' in greeek) means hub and is a meeting point, a point of sharing experience and knowledge, information and know how. Komvos aims to utilise innovative ideas and practices for the empowerment of collective and participatory citizens’ initiatives and for the promotion of cooperative and alternative economics models.

RIPESS Europe aims to overcome the impacts of the current crisis and to promote organizational approaches from local to global that support freedom, reciprocity, solidarity and egalitarian exchange. The Network rejects both the causes and the consequences of the current crisis. According to RIPESS Europe Network, whenever men and women in the smallest village of the Old Continent have come together and developed a collective, emancipatory response to their needs, they have contributed to the progress of the social and solidarity economy. Cooperatives, self-help organisations, organizations of resistance movements, associations, Credit Unions and trade unions as well as poplar education circles and universities, encyclopaedia centres, workers’ libraries, choirs, theatre companies, they have all progressively become part of social and cultural heritage.