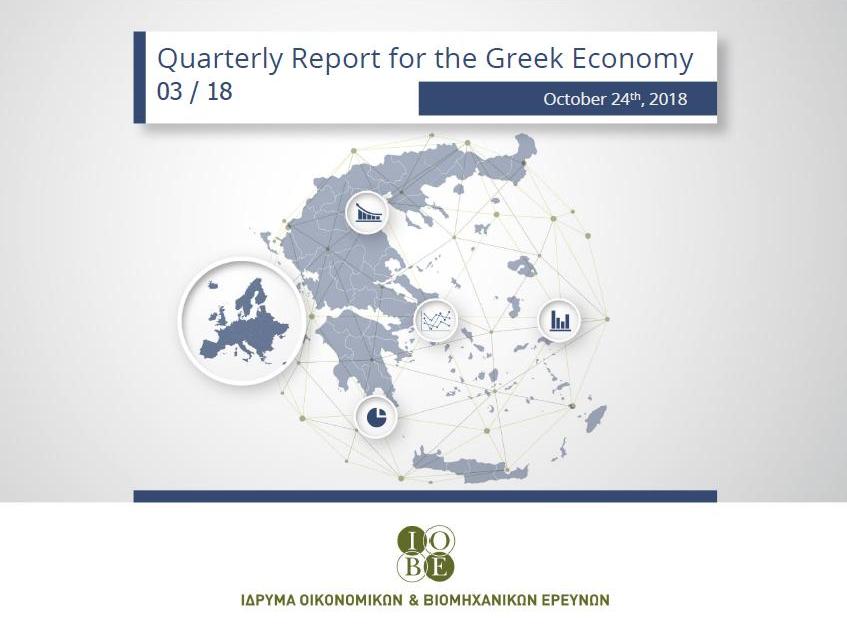 Investment activity in Greece is expected to accelerate next year, helping to raise the country’s growth rate to 2.4%, according to the quarterly report released on October 24 by the Foundation for Economic and Industrial Research (IOBE). Next year will see fixed investment in the country increase by 12 to 14% on a yearly basis, IOBE predicted. The Athens-based think tank maintained its economic growth forecast for 2018, based mainly on exports, which are predicted to rise 8% from 2017 by year-end, and the slight increase in household consumption in the second half of the year, by 0.6% on an annual basis, which will keep the growth rate in line with the estimates of the country’s creditors, the report noted. 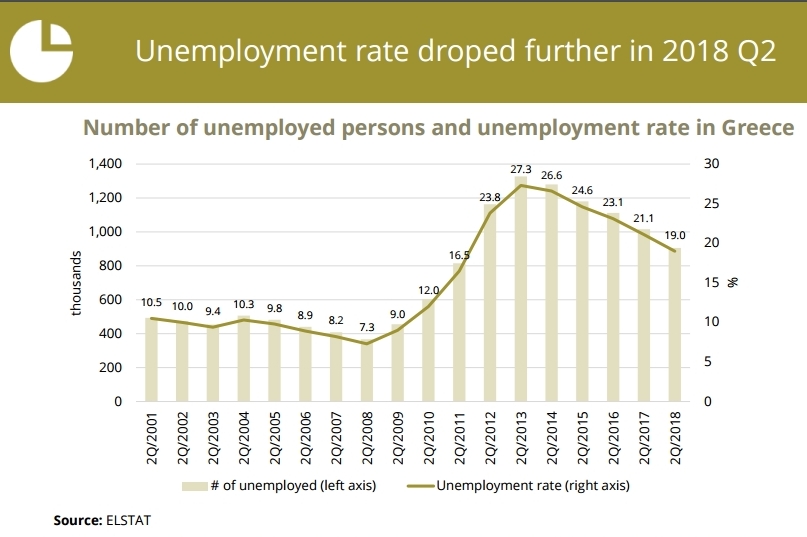 The General Director of IOBE, Professor Nikos Vettas noted during the report’s presentation:

The world economic expansion continues at a highrate, amid signs of gradual deceleration in the Euro  Area and instability in some emerging markets (Turkey, Argentina). The driving forces of growth are pro-cyclical economic policies in most countries and rapid world trade expansion. However, the rise of trade protectionism (tariffs between the USA and its trading partners, Brexit negotiations), worsening of economic expectations  indices and transition towards tighter global monetary stance will  decelerate the global growth  momentum in the medium run.

Mild acceleartion in real GDP growth in 2019 due to investments

IOBE expects further ease of unemployment during 2018, through employment expansion in extrovert sectors (tourism, transportation) plus  a  higher  y/y contribution from  construction  activity.  The  improvement  in household  expectations  following  the  end  of  the  support  programs  and  further  ease  of  capital controls, will be reflected in their  consumption,  hence  positively  affecting  employment  in relevant sectors. Public sector employment will also increase. Consequently, IOBE forecasts the annual  unemployment rate close to 19.3% in 2018 and slightly  below 18.0%  in 2019,  when unemployment drop is expected to decelerate.

Inflation rate was positive during Jan -Sep 2018, reaching 0.5% versus 1.2% in the same period of 2017.  Inflationary pressures stem mainly from global oil prices.  The impact from indirect taxation was marginally positive. Domestic demand seems to mildly recover, also reflected through the harmonized inflation index excluding energy at constant prices, which has increased for the first time since 2011.  IOBE forecasts an annual inflation rate of 0.8% in 2018 and slightly higher and close to 1.3% in 2019.

Banking System: some progress expected in 2019

The banking system confronted strong stock market pressure in mid-2018, despite the positive outcome of the stress tests in May.  Key  challenge  for  the  banks  is  the  high  stock  of  NPEs  and 3 their ambitious reduction targets by 2021, the weak quality of banks’ assets and capital,  their weak  profitability  and hampered ability  to  issue  credit.  Nonetheless, some  fundamentals exhibited  positive  trends  in  mid-2018,  such  as  the  accelerated  return  of  private  deposits, gradual reduction of NPEs in line  with  targets,  reduction  of  the ELA  and  further  relaxation  of capital  controls. Credit contraction to  the private sector continues,  while  some  progress  is expected  in  2019  as  long as  NPEs  continue to shrink including  through a more qualitative adjustment, and trust recovery continues to encourage the return of deposits.