Drones made in Greece 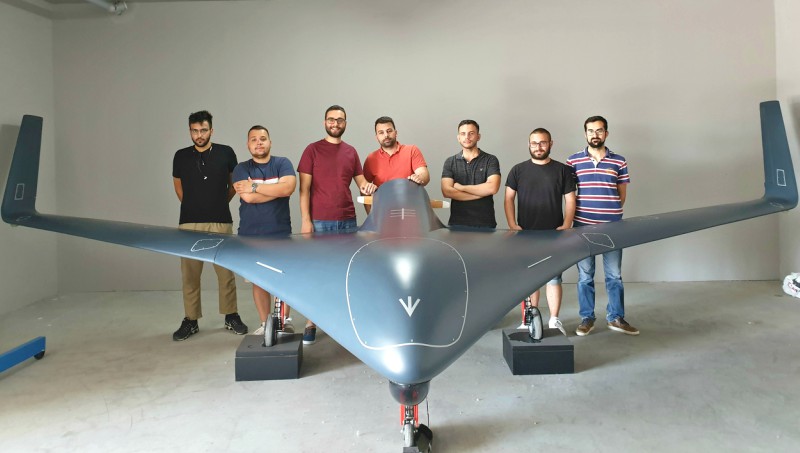 Greece has entered a new era in the production of Unmanned Aerial Vehicles – the so-called drones. The MPU RX-4, the fruit of a Greek project to develop and manufacture an innovative robotic UAS, was presented at the Thessaloniki International Fair, taking place 7-15 September 2019. Also, on 3 September 2019, the first Airworthiness Certification was completed for OURANOS, an Unmanned Aerial System (UAS) manufactured in Greece; the connecting link between the two stories is the Aristotle University of Thessaloniki and its Laboratory of Fluid Mechanics & Turbomachinery.

The Multirole Portable UAS (MPU) is a three year project to develop and manufacture an innovative robotic Unmanned Aircraft System (UAS) for multiple purposes; it consists of a multi-purpose hybrid fixed-wing Unmanned Air Vehicle (UAV) and a portable ground station (PGS), with a Vertical Take Off and Landing (VTOL) configuration. VTOL technology gives aircrafts an important advantage compared to other fixed-wing UAVs which, unlike the most widely used polycopter “drones”, require a runway or launcher for takeoff and landing.

The project is run by the Laboratory of Fluid Mechanics & Turbomachinery (LFMT), part of the Energy Department of the School of Mechanical Engineering, Aristotle University of Thessaloniki (AUTH), in collaboration with the “UAV-iRC - Unmanned Aerial Vehicles Research Center", which is part of the Centre for Interdisciplinary Research and Innovation (CIRI - KEDEK) of AUTH. Other collaborating parties are the Laboratory of Robotics and Automation at the Department of Production and Management Engineering, Democritus University of Thrace (DUTH) and with the Greek companies MLS Innovation Inc. and Geosense. The project is co‐financed by EU and Greek national funds through the Operational Programme Competitiveness, Entrepreneurship and Innovation.

The Laboratory of Fluid Mechanics & Turbomachinery (LFMT) had presented the first large-scale Hellenic Civil UAV for surveillance missions -practically, the first Greek drone- at the 2016 Thessaloniki International Fair. It was the HCUAV RX-1, a fixed-wing UAV developed as part of the HCUAV collaborative research project, under coordinator Kyros Yakinthos, Professor at the Energy Department of the School of Mechanical Engineering, AUTH, who is also the project coordinator for MPU. At the 2018 Thessaloniki International Fair, the LFMT presented the DELAER RX-3, a large-scale, autonomous, fixed-wing blended-wing-body UAV, with a portable ground control station, aimed for rescue missions, based on the expertise acquired through the creation of HCUAV RX-1 prototype.

The MPU RX-4, currently presented at the Aristotle University stands (Pavillion 14-Akademia) at the 84th Thessaloniki International Fair, is the latest development in this series. Designed and developed by the LFMT, it is a fixed-wing blended-wing-body UAV with VTOL configuration, achieved through the use of an electric fan located in the centreof the aircraft fuselage and two motors with propellers located on the two front arms of the aircraft which can rotate 90 degrees. MPU RX-4 has a wingspan of 1.8 meters, a 2-hour of standby time, a maximum take-off weight of 4 kg and it can reach a 125 km/h velocity. It can provide its services in missions of mapping, photogrammetry, search and rescue, surveillance, guarding and patrolling, and agriculture. There is also potential of deployment for emergency missions.

An Airworthiness Certification for a UAS was issued for the first time for a Greek company on 3 September 2019; OURANOS UAS, a “drone” manufactured by ALTUS LSA, a company based in Chania, Crete, completed the process successfully and in accordance to the standards and directives of the Flight Standards Directorate of the Hellenic Civil Aviation Authority (HCAA). The certification process was conducted by HCAA, in collaboration with the Aristotle University of Thessaloniki (AUTH).

The detailed and time demanding process required to achieve the airworthiness certificate is based on the UAV standards issued by the Hellenic Civil Aviation Authority, STANAG and includes static and dynamic tests, safety redundancy tests, stress tests, NDT tests, conformity tests, etc. The certification process was concluded with successful flight tests conducted on 1 and 2 August 2019 at the Maleme Airport in the presence of representatives of the HCAA and AUTH. 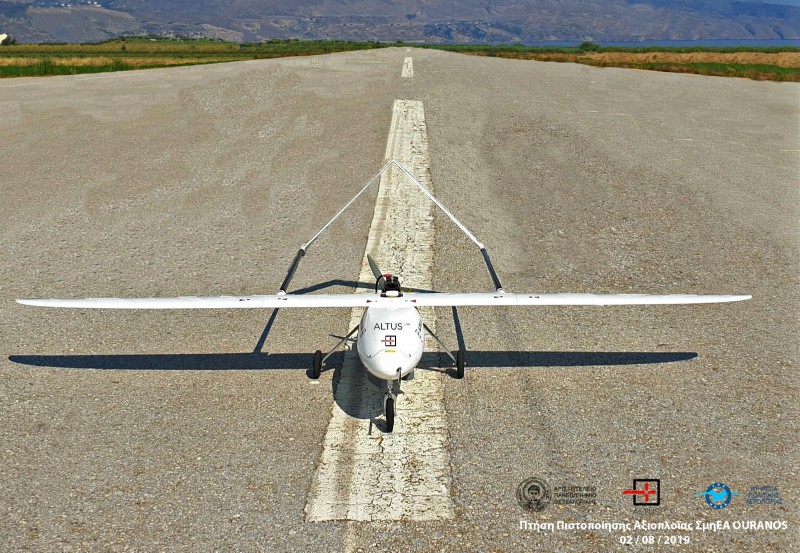 HCAA Commander Konstantinos Lintzerakos presented the certificate to Zacharias Sarris, CEO of ALTUS LSA. Addressing the ceremony, Lintzerakos pointed out the significance of certificating a Greek-made UAS for the first time, and the meaning of this development for the future of UAS technology in Greece. In his statement, Zacharias Sarris thanked the HCAA and Aristotle University, especially Pr. Kyros Yakinthos and the Laboratory of Fluid Mechanics & Turbomachinery, for their collaboration that confirms the benefits of cooperation between the private and public sector and educational institutions.

The OURANOS system (UAS Category C), with 24 kg maximum takeoff weight, is a reliable fixed wing RPAS with optimised up to 10hours flight endurance and a flight envelope of best in class performance. OURANOS features a highly advanced autopilot system and a standard gyro-stabilised dual EO & IR sensor configuration with geo location and geo tracking capabilities. Due to its dedicated payload bay, it can be easily configured with various payloads offering a versatile unmanned solution for a variety of missions.

The regulations for UAS Airworthiness Certification had been introduced in 2016 (Official Government Gazette Β-4527/ 30.12.2016) listing all parametres regarding safety, rights and obligations, issues of privacy, data protection, civil liability etc.