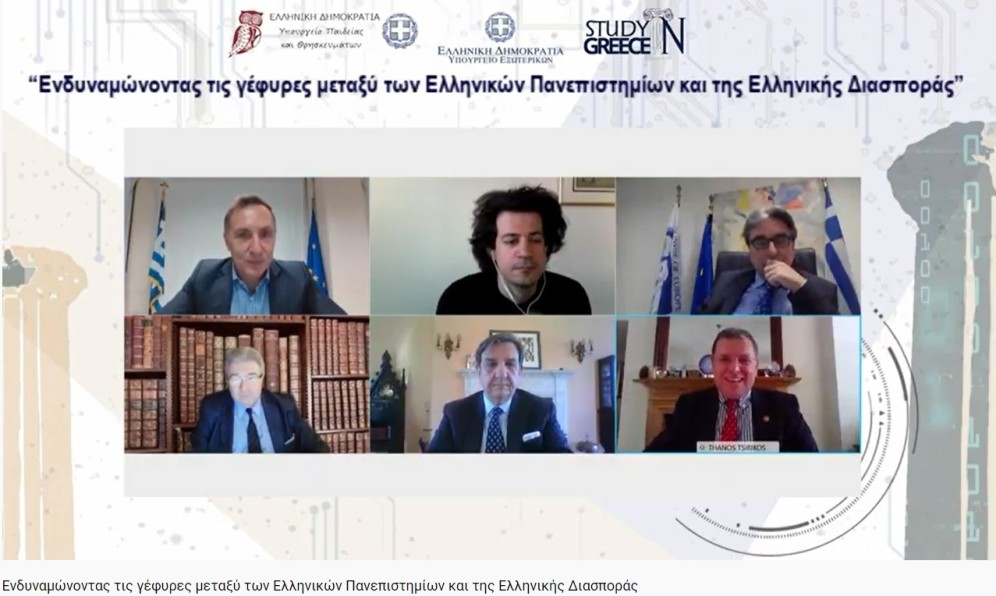 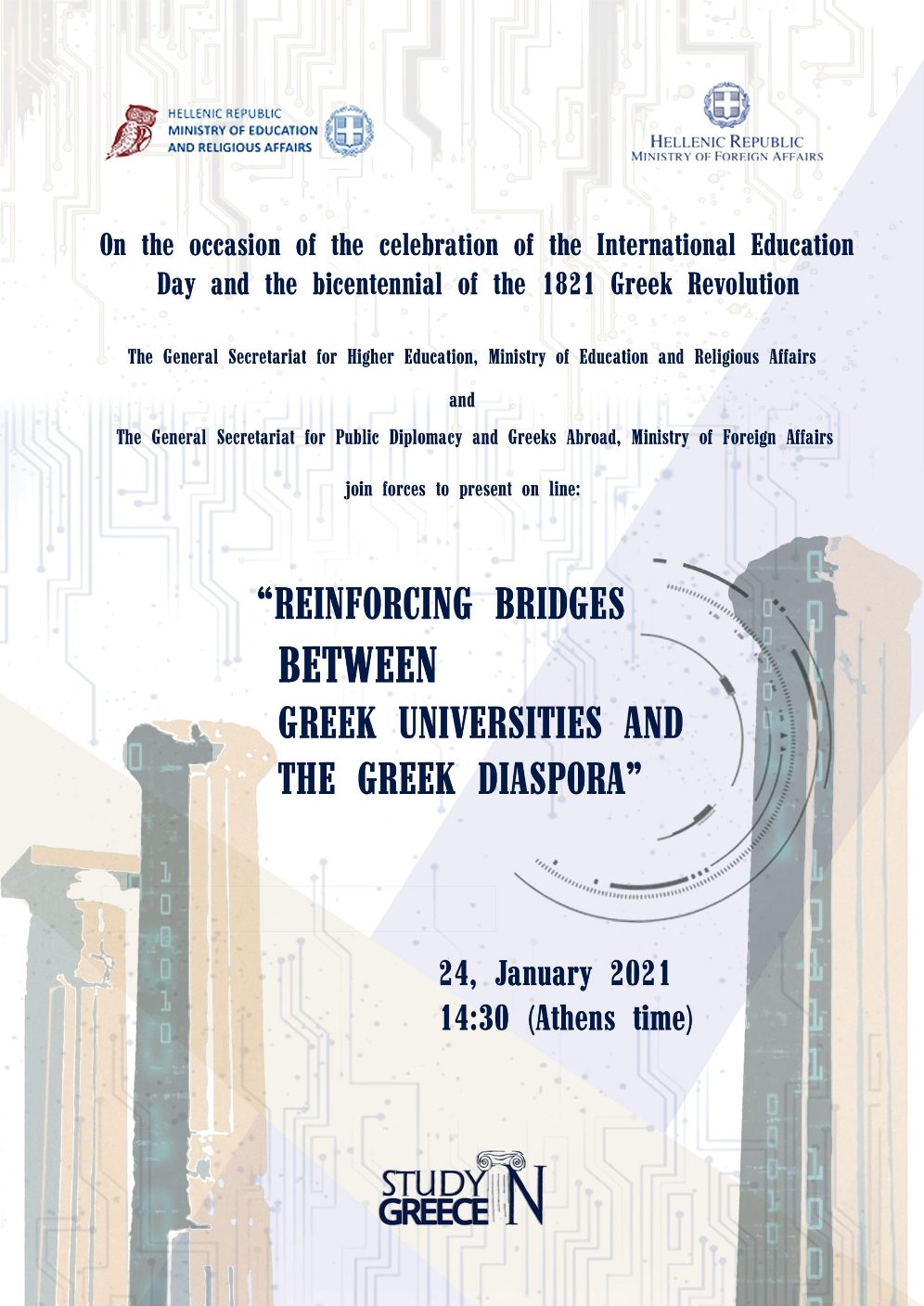 The conference highlighted the initiatives of Greek Universities in education, research and innovation, in an effort to strengthen the bond between higher education institutions in Greece and the Greek Diaspora, enabling students of Greek origin to act both as beneficiaries and as ambassadors abroad. 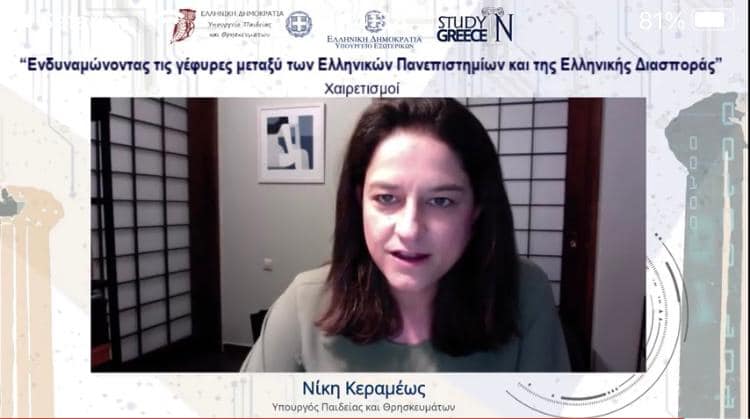 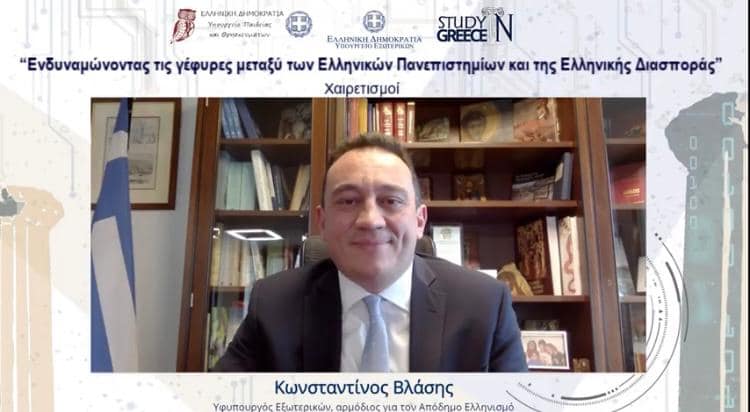 Deputy Minister of Foreign Affairs for Diaspora Greeks, Konstantinos Vlasis, noted that the Greek Government is focusing on the internationalization of Greek Universities and that the graduate and postgraduate study programs taught in foreign languages offer Diaspora Greeks an opportunity to study in the country where Political Science, Mathematics and Philosophy were born, in a high-quality environment without language limitations. 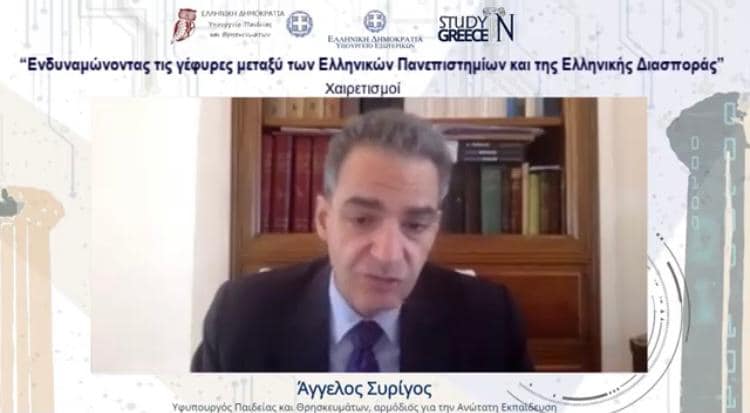 Deputy Minister for Higher Education, Angelos Syrigos, underlined the decisive contribution of the Greek Diaspora in the preparation of the liberation struggle of the Greeks against the Ottoman Empire, whilst also making special reference to the economic crisis that drove half a million of highly qualified Greeks abroad. Greek Universities offer Diaspora Greeks the possibility of pursuing high-level studies combined with the opportunity forge, renew and strengthen ties with Greece. 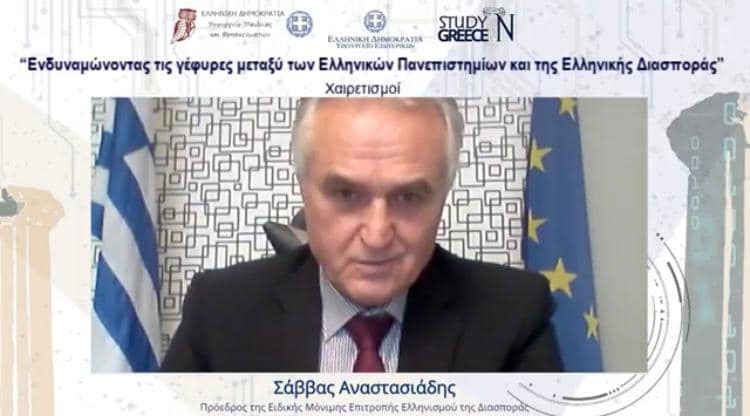 Secretary-General for Public Diplomacy and Greeks Abroad of the Hellenic Ministry of Foreign Affairs, John Chrysoulakis, emphasized the Greek Diaspora’s desire to participate at all levels of Greek education. Greek universities have long understood this need and have prioritized sectors and skills that open avenues to development and progress, he added, noting that they do this as part of their differentiated approach to attracting the participation and collaboration of our Diaspora in Greek affairs. 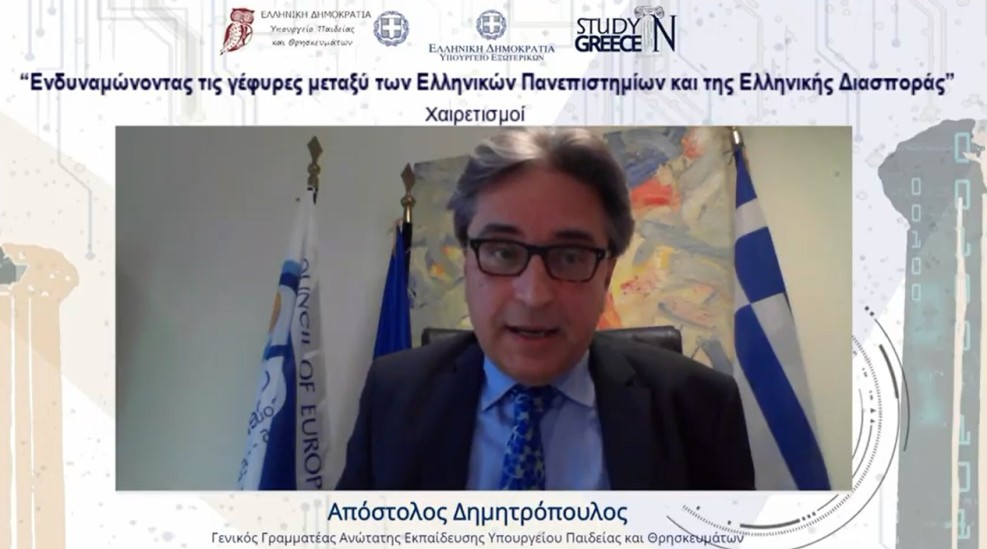 The Secretary-General for Higher Education of the Ministry of Education and Religious Affairs, Apostolos Dimitropoulos, referred to Ministry initiatives regarding cooperation with American Universities, while it is also examining possibilities for cooperation with China and a redefinition of its collaboration with the UK post-Brexit, stressing that the internationalization of Greek Universities is a strategic target.

Professor Nikos Papaioannou, ex-president of the Hellenic Universities Rectors’ Synod highlighted the need for more flexible legislation as regards acceptance of donations by members of the Diaspora. Professor Zisis Mamouris, president of the Hellenic Universities Rectors’ Synod, reminded that Greek Universities were always in close cooperation with the Diaspora and added that R&D should be further connected to business. Professor Mara Nikolaidou, Rector of Harokopeio University, stressed the historical importance of the Diaspora and asked for its help in organizing custom-made summer courses.

Professor Periklis Mitkas, Head of the Hellenic Authority for Higher Education, presented the work of the Authority regarding accreditation and evaluation of academic units for Quality Assurance, as well as the contribution of the Authority to enhance cooperation between Greek Academia with the Diaspora through the Registry of Experts that will also halt the brain drain.

Archibishop Elpidoforos of America focused on the relationship that every foreign student develops with the country he studies in and, given the positive branding of Greece, stressed the need to attract more foreign students. George, Metropolitan of Guinea on behalf of Theodoros II Pope and Patriarch of Alexandria and all Africa, focused on the difficulties that Greek education has to face in Africa and the role of the Greek Church in the diffusion of the Greek language as well as the establishment of the first Hellenic Egyptian University.

Third Panel: what does Greece have to offer?

Professor Michalis Koutsilieris, President of the Board of Directors of the State Scholarships Foundation (IKY), which is also responsible for managing Erasmus + in Greece, presented the initiatives and scholarships the State Scholarships Foundation (IKY) offers to national, foreign and diaspora students and researchers. There is a variety of programs such as the THYESPA-IASON Scholarships for Greek summer courses at the University of Athens and Thessaloniki, Modern Greek Language and Culture Courses: an eight-month program intended for foreign nationals, holders of a graduate degree from a non-Greek university outside Greece who do not permanently reside in Greece and many others (such as Doctorate scholarships - European University Institute of Florence), which have enhanced international cooperation and the internationalization of Greek Universities.

Professor Christos Michalakelis, President of the Study in Greece Organization, underlined that there are 140 postgraduate programs taught in a foreign language in 24 Universities situated in 60 cities in Greece. Greek Universities offer high-quality courses at an affordable cost (around 5000 euro total). Michalakelis stressed that what Greek Universities have to offer is not limited to classical studies and that following the June 2020 legislative changes, Greek Universities offer Bachelors and Masters degrees, Joint programs in collaboration with foreign Universities, Internships, Exchanges and study abroad programs, accredited short term, summer and winter study abroad programs, faculty-led courses from universities abroad etc. 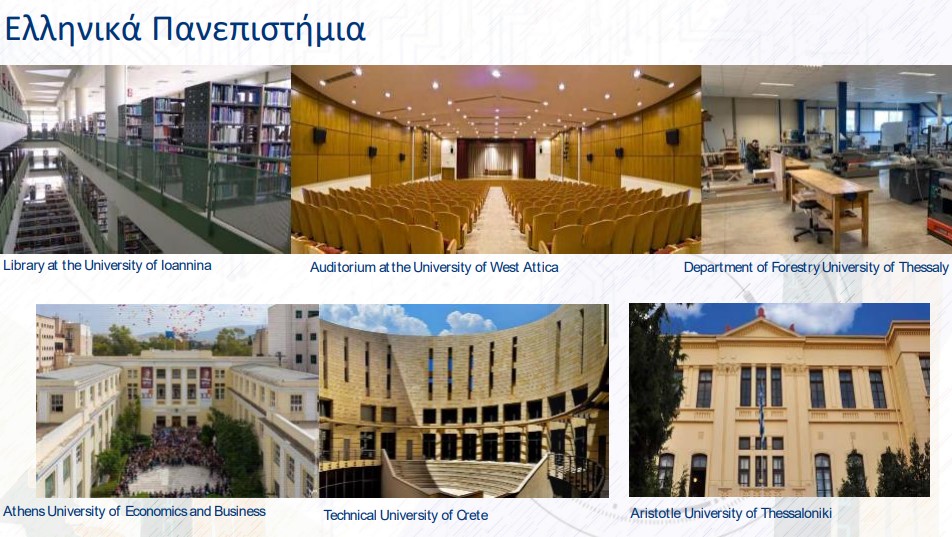 Foreign and diaspora students can find information for all of the above at the Study in Greece Organisation, the official one-stop point that caters to all foreign student needs, ranging from choosing courses to accommodation and logistics as well as immersion in cultural heritage. Study in Greece also promotes the internationalization of Greek Universities through collaboration with Universities abroad, participation in international fairs ((NAFSA - USA, CACIE – China, etc.) and roadshows abroad (Albania, Ukraine, Canada).

Fourth Panel: the Illustrious Graduates. What Has Greece offered 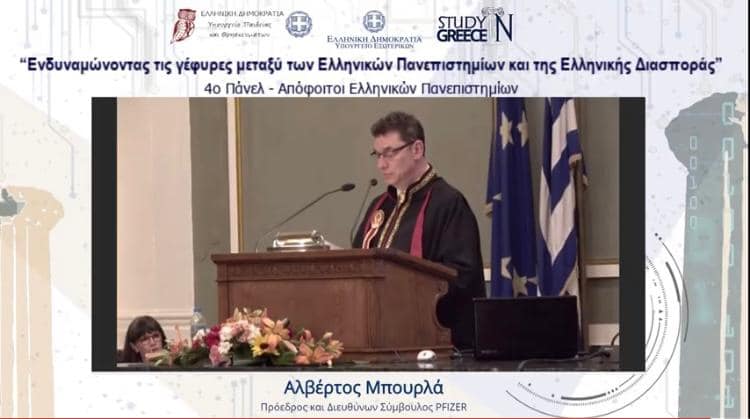 In an extract of his thanking speech for his announcement as an Honorary Doctor by The Aristotle University of Thessaloniki, Albert Bourla, Chairman and Chief Executive Officer of Pfizer, emphasized the value of the education offered and the social sensitivity inspired by his Greek University studies that prepared him for his future positions of responsibility and leadership roles. 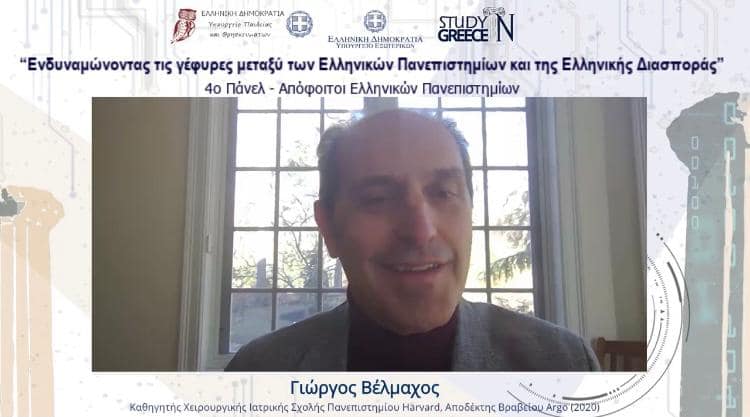 George Velmachos, Division Chief of Trauma, Emergency Surgery and Surgical Critical Care, John F. Burke Professor of Surgery, Harvard Medical School (receiver of Argo award 2020) commented that as a surgeon who completed his studies in Greece, he received free education, unlike his peers who are repaying their student loans up to their sixties. There was no spoon-feeding in Greece and we had to take initiatives, he noted, adding that the strong social networks family and friends that exist in Greece are an important factor in building self-confidence. He concluded with the observation that more meritocracy and better organization is needed. 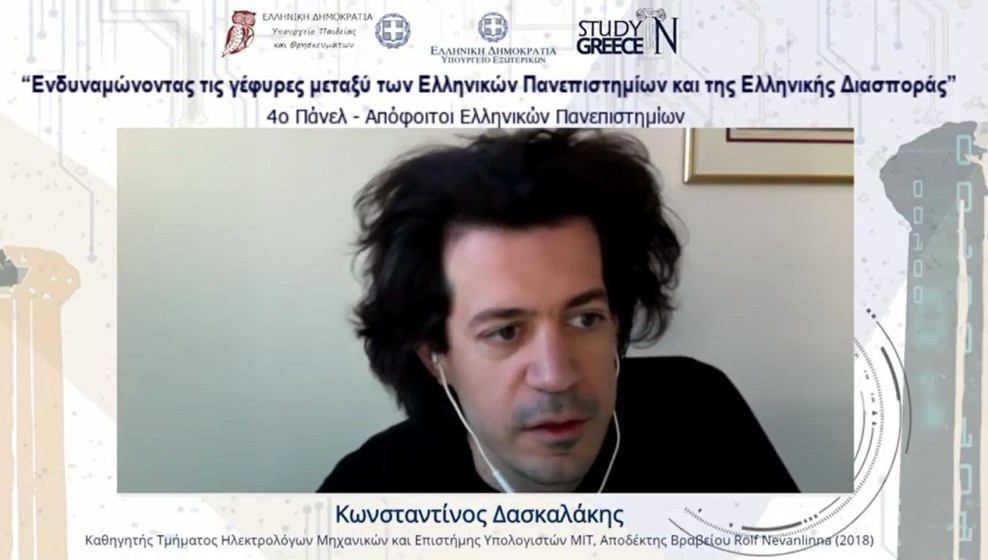 Constantinos Daskalakis, Professor at MIT's Electrical Engineering and Computer Science department (2018 Rolf Nevanlinna Prize), noted that the quality level of the education of Greek University graduates is constantly rising, that the entry to Greek Universities is based on objective criteria and that his peer group was very influential. Through his Greek University experience, he obtained the skills necessary for research. He mentioned that it’s necessary to promote connection to business and internships, but in a way that will not influence scientific research.

Maria Themeli, Assistant Professor of Hematology at VUmc Cancer Center Amsterdam said that the Greek education system offered everything she needed to survive in a work environment, explaining why it mustn’t lose the global character it offers its students.

Giorgos Anagnostou, Associate Professor at the Ohio State University Center for Folklore Studies, said that programmes such as the THYESPA-IASON Scholarships for Greek summer courses at the University of Athens and Thessaloniki enhance the ties between Greece and the Diaspora and that more research on immigration and the Diaspora is needed as well as the establishment of a relevant museum. Thanos Tsirikos, Orthopedic Surgeon, Scottish National Spine Deformity Centre in Edinburgh, also offered suggestions on enhancing ties with Diaspora. 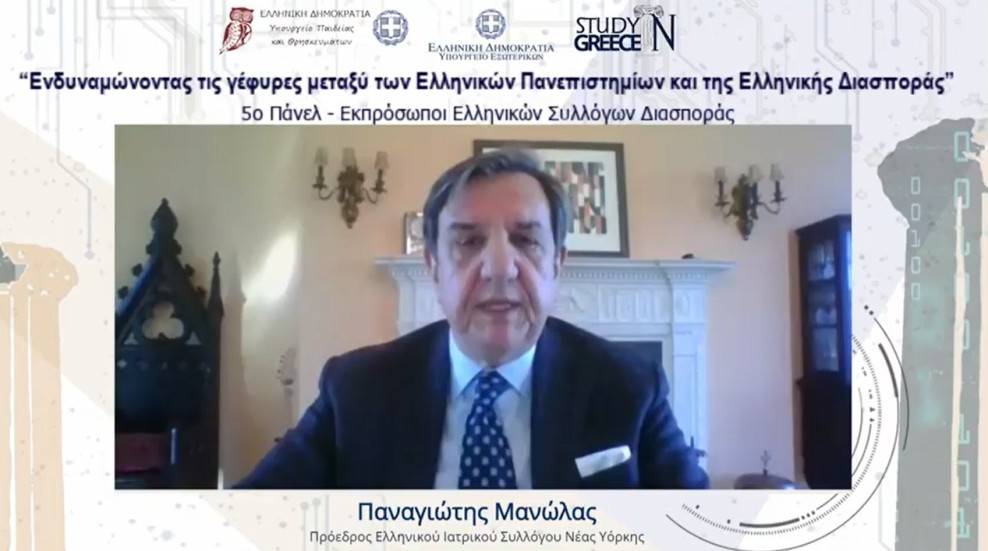 Panagiotis Manolas, Assistant Clinical Professor, president of the Hellenic Medical Society of New York (HMSNY), said that many doctors of Greek origin feel guilty because they can’t repay their homeland, on account of legal restrictions. Second and third-generation doctors would happily teach in Greece, but they don’t have access to university hospitals. Spyros Mezitis, President of the Federation of USA & Canada Hellenic Medical Societies offered suggestions for deeper cooperation between Greek Academia and the Diaspora. 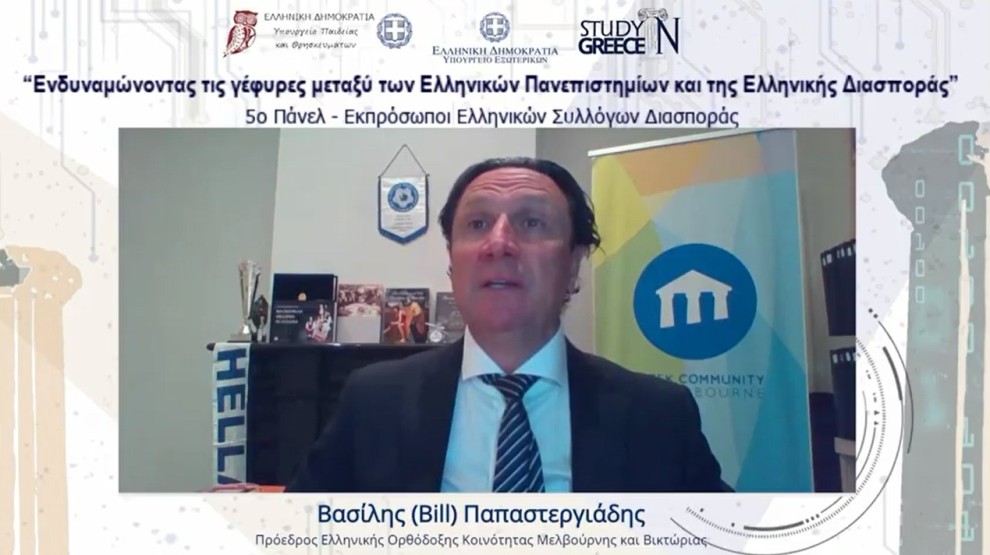 Bill Papastergiadis, President of the Greek Orthodox Community of Melbourne and Victoria, presented the work done by the Community’s 15 schools, its cooperation with Aristotle University, adding that in recent years some 50-60.000 Greeks moved to Melbourne. Bill Mossaidis, AHEPA Executive Director, stressed the importance of accreditation for students that come to Greece. Cristos Kavalis, President of the Cairo Greek Community, said that most children of the Greek Diaspora in Egypt want to continue their studies in Greece and that this trend should be strengthened with support in accommodation and a rise in quotas.

Ioanna Zaharaki, President of the European Network of Elected Greeks in Local Authorities Abroad, Louis Loizou, Chairman of the Hellenic Bankers Association Executive Committee, and Fotis Karantonis, President of the National Hellenic Student Association, focused on the need to institutionalize collaboration between Greek Universities and Diasporathrough informative events, scholarships, exchange programs etc. and underlined their will to help. 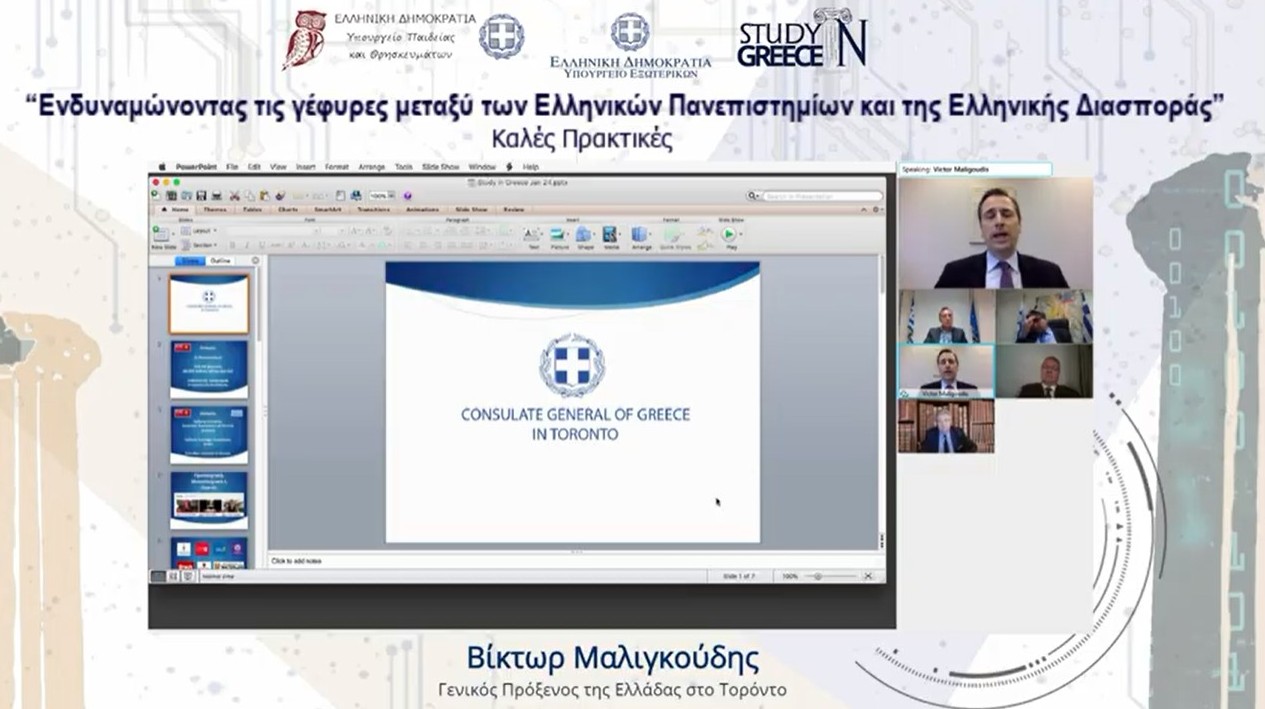 Viktor Maligoudis, Consul General of Greece in Toronto, referred to the collaboration he had with Christos Michalakelis at the Study in Greece road-show in Canada in the context of enhancing the internationalization of Greek Universities, noting that he was amazed by the flexibility that many Universities exhibited so as to send their students to Greece.

Stratos Efthymiou, Consul General of Greece in Boston, highlighted the fact that 1% of the total number of full Professors in the USA is Greek and the importance of attracting foreign students in Greek Universities. 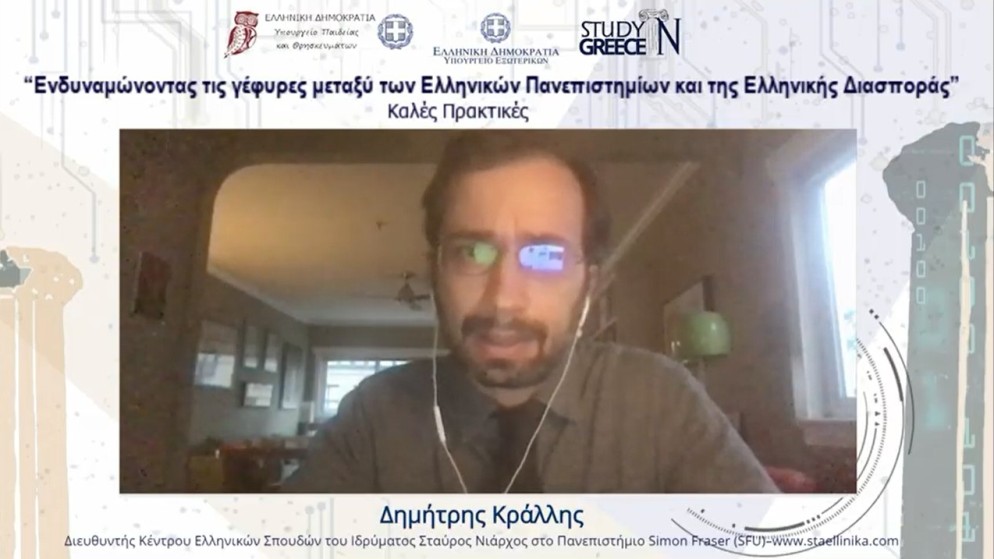 Professor Dimitris Krallis, Humanities Director at the SNF Centre for Hellenic Studies, presented the “staellinika” Platform that is currently being used by 23.000 Diaspora Greeks internationally and he thanked Deputy Minister of Foreign Affairs for Diaspora Greeks, Konstantinos Vlasis and the Secretary-General for Public Diplomacy and Greeks Abroad of the Hellenic Ministry of Foreign Affairs, John Chrysoulakis for their eager collaboration in its promotion. Professor Krallis also referred to his experience as an organizer of summer schools in Greece, highlighting the need for accreditation.