With an impressive pavilion under the slogan “Greece of Tomorrow, Today” Greece participated in the Expo Dubai 2020 aiming to showcase the competitive advantages and areas of innovation of the country under the strategic transformation of the Greek economy. The Expo 2020, the largest event ever staged in the Arab world, had been postponed by a year because of the covid19 pandemic and it was held from October 1, 2021, to March 31, 2022 in the United Arabic Emirates. The event is considered one of the most important exhibitions in the world as World Expos traditionally provide a platform to showcase the greatest and latest innovations from around the globe. The Greek participation was organized by Enterprise Greece, the official investment and trade promotion agency of the Greek state operating under the auspices of the Greek Ministry of Foreign Affairs.

Aiming to illustrate that Greece has started to find its way toward economic development and innovation, the Greek pavilion was inspired by the myth of the Cretan maze and Ariadne’s thread. Revolving around the labyrinth of the Greek mythology, the Greek presence in Expo 2020 narrates the story of a country that has found its path, demonstrating all of its achievements, playing thus a vital role in the investment environment.

The invisible Ariadne’s thread in the Greek pavilion connects all of Greece’s comparative advantages from culture and tourism to innovation and human capital, linking the present and the future of Greece. In this concept, the pavilion is divided into eight interconnected thematic pillars representing the different comparative advantages of Greece offering an integrated perspective of a country that is constantly progressing and evolving. The Greek pavilion welcomed more than half a million visitors that had the opportunity to virtually explore and discover Greece’s culture, beautiful landscapes but also Greece’s tech and innovation future through different Augmented Reality applications. 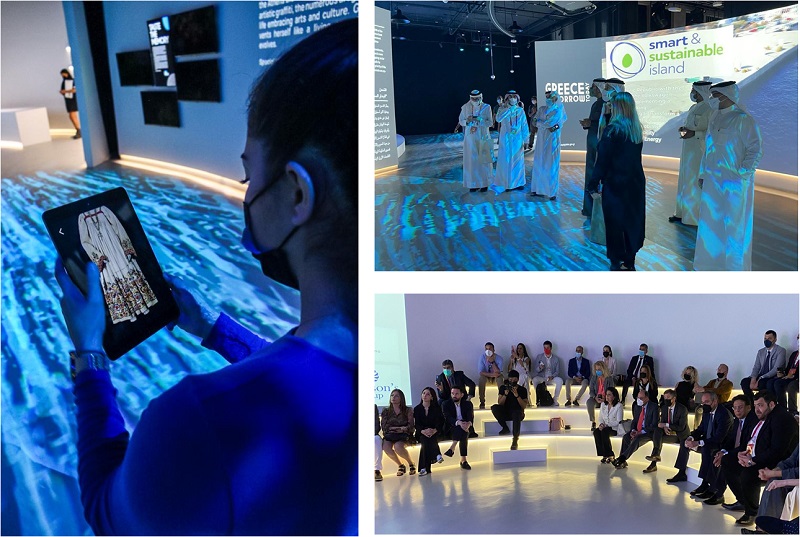 The Greek pavilion revolved around the following thematic pillars:

Technology / Innovation
Technology and Innovation were at the peak of the Greek presence in the Expo 2020. Digital transformation of the Greek state has been a top priority for the Greek government. Through the digitalization and simplification of administrative procedures, the country aims to transform its economic model attracting more investments and ameliorating quality of life. At the same time the Greek ecosystem of research and innovation has a particularly extroverted dynamic to present.

Energy / Environment
The transition to a “green” Greece has already begun. A new energy policy, with “green” strategies to reduce dependence on fossil fuels and increase the share of renewable energy sources in the Greek power mix, is becoming a priority, with the aim of protecting the environment. Astypalea, Tilos, Ai Stratis are energy autonomous islands, just to mention a few examples of the ongoing “green revolution” in the country.

Agri-food
The food and agricultural products sector has always been one of the most important export sectors in Greece, with a particularly strong presence in the international markets. The unique qualities of Greek agricultural products constitute the basis of the Greek and Mediterranean Diet contributing also to the exceptional Greek gastronomy.

Shipping, Supply Chain & Infrastructure
Greece has a significant maritime tradition and Greek shipping services are of international renown, as Greek ship-owners hold the largest merchant fleet in the world. In addition, the country’s geographical position at the crossroads of three continents (Europe, Asia and Africa), has made Greece a strategic transportation hub playing a vital role in regional logistics. 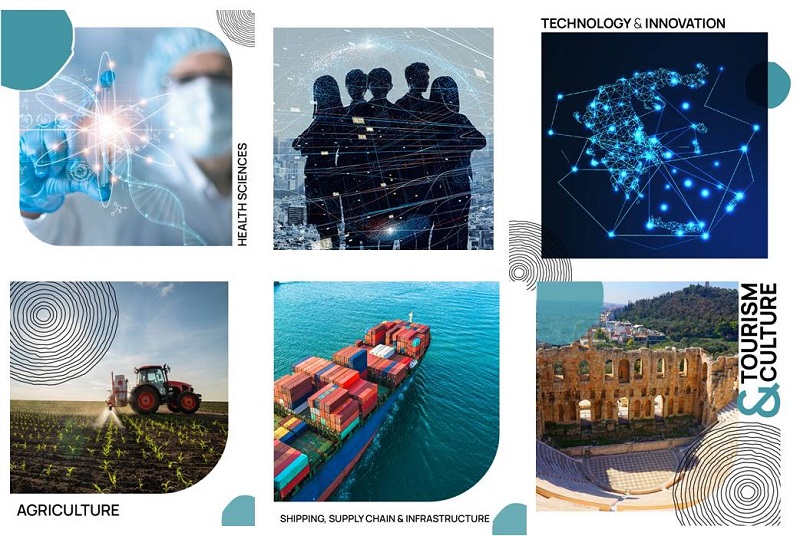 Culture / Tourism
Greek culture has been synonymous to Classical Greece and antiquity, but current arts and culture movements are highlighting the country’s dynamism, inspiration and creativity. Apart from the Acropolis and innumerable other archeological sites, Greece has much to offer in modern art, too. At the same time Greece is the ideal travel destination, whether you prefer to explore the country or you are rather into luxury vacation, Greece has it all. Cultural and religious tourism, health and medical tourism, nautical tourism and even thematic winter tourism are just some of the areas that will help Greece attract numerous visitors and complement the famous Greek tourism product.

Human Capital
Greece has remarkable human resources with multiple skills, qualifications and talents contributing to the attraction of business investments in the country. In addition, Greece has set up a business-friendly environment with significant incentives attracting already the interest of a great number of powerful international business groups.

Industry
Industry in Greece has started to become stronger and more competitive in the international environment operating successfully in fields such as heavy industry, waste management and energy storage. Adapting to the current challenges, industry in Greece follows a green and sustainable growth model pursuing adequate digital transformation.

Health
With a highly skilled workforce and well-established R&D and manufacturing capability, the Greek Life Sciences and Pharmaceuticals industry exhibits significant growth potential both in serving the internal market, as well as in expanding its reach beyond national borders.

During the Expo 2020 a series of events took place at the Greek pavilion with the aim to present and promote Greece’s comparative advantages and investment opportunities hosted by several ministries and regions of the country. The Ministry of Foreign Affairs along with Enterprise Greece and the Municipality of Mykonos organized the event “Α Universal Narrative of Light - From Apollo’s Delos to a brighter future” aiming to showcase that modern Greece is an open and extrovert country sharing the values of international cooperation and intercultural dialogue. Making reference to the Cycladic light of the archeological site of Delos the organizers presented how the past of the country illuminates its future, linking the cultural heritage of Greece with its modern identity.

The Ministry of Development and Investment organized two major events. The first event was about the emerging Greek ecosystem of research & innovation and the second-one about the strategic investments and the investment opportunities in Greece. The aim of the events was to showcase the dynamism of the Greek start-up ecosystem exploring investment and synergies opportunities with the business environment of the United Arab Emirates.

Greek gastronomy events, concerts, virtual visits to museums and a series of events concerning the promotion of Greece as tourism or filming destination were also organized by the Ministry of Tourism, the regions of Greece and competent institutions.