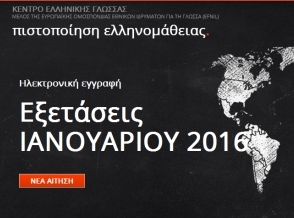 The Center for the Greek Language next examinations for the “Certificate of Attainment in Greek for Professional Purposes” take place next month (15.01.2016); the registration deadline expires today.

These exams are taken by professionals who wish or intend to work in Greece and are required to prove their proficiency in the Greek language. Candidates are examined at level A2 of the Common European Framework. Exams cover three language skills (Listening, Reading, and Speaking), and they are held three times a year: January, May, and November.

Applications are submitted through the Centre for the Greek Language special webpage). The next examinations for the Center’s “Certificate of Attainment in Greek”, held once annually, are due in May

This qualification responds to the needs of all learners of Greek as a Second/Foreign Language in Greece and abroad for a state certificate of attainment at various levels. This Certificate, at level B2, allows foreigners to enroll at a Greek institution of higher education (registration period for exam: February 1, 2016 – March 13, 2016).

The School of Modern Greek Language at the Aristotle University of Thessaloniki offers an Online Greek Course for two levels of language proficiency: A1 OGC is designed for absolute beginners and A2 OGC is offered to those with a very basic knowledge of Greek wishing to further develop their language skills. The courses begin January 11. Apply online here!

See also: Portal for the Greek language and language education; Guide to the Examination for the Certificate of Attainment in Greek; Διαδρομές στη διδασκαλία της ελληνικής γλώσσας