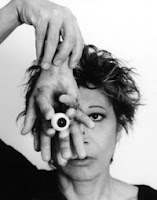 Greek artist Anna Laskari's artwork "Left of the Parthenon" was chosen to represent Greece at a global art biennial which will take place in Caracas, Venezuela, under the title “First Biennial of South: People in Resistance" from November 1, 2015 to February 28, 2016.
Greece is the only southern European country to participate in the program featuring 138 artists from 40 countries. Laskari’s artwork is a 2-minutes-long 3D animation, showing the panic of a cat trapped on a balcony of a closed office somewhere in the  center of Athens - symbolically depicting an image of how people suffer from the ongoing crisis and the austerity policies implemented in Greece, as well as how people try to resist.

According to the artist, one could potentially add to the ‘labels’, which always represented the image of Greece, some new ones. On the side of emblematic terms like the ‘Parthenon’, the ‘Acropolis’ , and ‘cradle of Democracy’, new predicates are added, such as ‘insecurity’, ‘fear’, ‘anger’, ‘social turmoil’ and ‘solidarity’.

The Museum of Fine Arts in Caracas is the main venue that will host the Biennial’s exhibitions, workshops, symposia, meetings and conferences which are organized on the initiative of Venezuela’s Ministry of Popular Power and are materialized under the auspices of the Institute of Representational and Spatial Arts (IARTES).

The aim is to build bridges of cultural interaction from the peoples in resistance, located on five continents. As the director of Development of the Arts in the Communities of IARTES, Diosman Bobadilla, put it: “The goal is to demonstrate art in resistance and to show the political connotation of visual art, which some sectors aim to unlink”.
fShare
Tweet