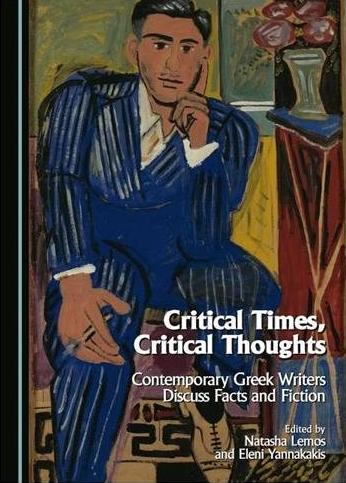 While no member of the public could have missed the Greek crisis, it has been represented only by the refraction in journalism of the views of politicians, economists and international bureaucrats. The voice of artists, “the antennae of the race”, has been so far unheard.

Critical Times, Critical Thoughts - Contemporary Greek Writers Discuss Facts and Fiction (edited by Natasha Lemos & Eleni Yannakakis, Cambridge Scholars Publishing, 2015) is the first book in any language to offer a timely account of the response of the Greek writers and intellectuals to the ongoing financial crisis. More importantly it is the first book to publicise the direct personal views of a representative range of very eminent literary figures in Modern Greek Literature on this challenging issue.

The four parts of the volume deal with representation of Otherness, contemporary historical fiction, the new detective novel and Greek Cypriot fiction, while the Introduction offers an overview of Modern Greek fiction and culture over the last 40 years. Written mostly in 2014 the essays are “the latest” on the crisis not in the manner of a news bulletin from yesterday’s midnight meeting in Brussels, Athens or Berlin but in reflection on the underlying patterns that made the crisis possible and make it endure.

The reader of this book will find new insights into the crisis, its causes and its wider ramifications. Contributors include Angela Dimitrakaki (To Be or not to Be an Organic Intellectual When Fascism Is Repeated as Farce? The Case of Contemporary Greece), Theodoros Grigoriadis (“The Other” and the Crisis), Rhea Galanaki (The Reality of Today in Today’s Historical Novel), Yorgis Yatromanolakis (Corrupting History and Narrating Corruption), Maro Douka (In Speaking for Myself I Spoke also About You), Vangelis Hatzivasileiou (The Recent Revival of the Historical Novel in Greece), Filippos Filippou (Crime Fiction During the Crisis), Frangiski Ambatzopoulou (Niki Marangou: Writing as an Art of Survival).

The publication of this volume was inspired by and is partly based on aseries of literary discussions organised by the Hellenic Centre in London between February and October 2011.