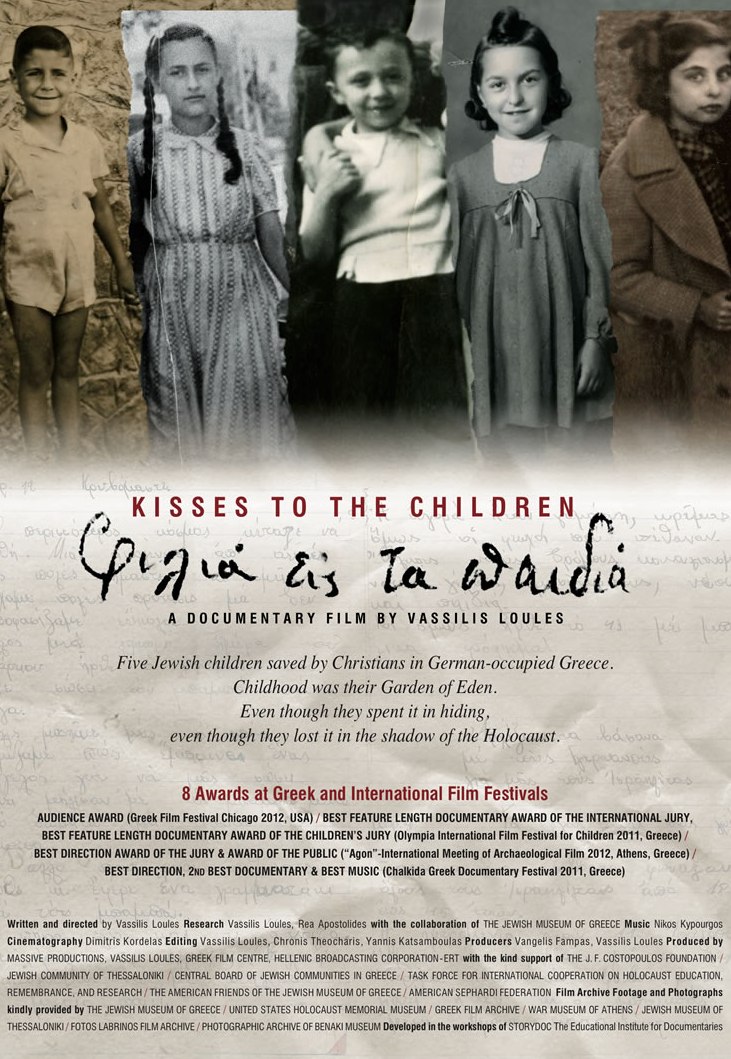 The United Nations has designated the 27th of January as an International Day of Commemoration for the millions of victims of the Nazi Holocaust during World War II: it was chosen as the anniversary of the liberation of Auschwitz-Birkenau, the biggest death camp, by advancing Soviet troops. It is also designated in Greece as Remembrance Day of the Greek Jewish Martyrs and Heroes of the Holocaust. The victims of the genocide include at least 60,000 Greek Jews of the 73,000 that - according to the census of 1940 - lived in occupied Greece.

In Vassilis Loules’ award-winning documentary film “Φιλιά εις τα παιδιά / Kisses to the children”, three women and two men who were children aged from 5 to 11 during the occupation, speak. It is a documentary about the Jewish community in Greece based on testimonies of Greek Jewish survivors who spent the German occupation in hiding and talk about their lives.

This tribute to the once vibrant Greek Jewish communities before the war is complemented by rare archival material made in occupied Greece by German soldiers and Greek patriots. Rosina, Iossif, Eftyhia, Shelly and Marios, who were saved by Christian families during the German occupation, five "Hidden Children" who lived in total silence, tell their stories; stories of terror, anguish and confusion but also stories of salvation and carefree childhood into the arms of strangers. Five children were forced to mature abruptly. They grew old, carrying the memory of those children who were never given time to grow up.

As Hagen Fleischer, Professor of History at the University of Athens, puts it “the director did not just want to make a dramatic film on the Holocaust. He wanted to focus on the hollow terror and the exclusion these children experienced in abjectly abnormal circumstances. The bravery of the people, the (not in name only) Christians who risked their lives helping these children is crystal clear. At the same time the film outlines the continued corrosion of the country’s Jewish communities even after the liberation. The normalcy of life had been lost, nothing was the same anymore and this is revealed in a poetic way in the film…”

“Φιλιά εις τα παιδιά / Kisses to the children” (115 mins with English subtitles) was shot in Athens, Thessaloniki, Ioannina, Chania, in Greece and in Auschwitz in Poland.

The director Vassilis Loules has collaborated with Hellenic Broadcasting Corporation (ERT) as Coordinator of the Short Films Program and with the Greek Ministry of Foreign Affairs Film Archive.