The 2nd IN-EDIT Festival- Athens Edition will be hosted in Astor movie theater (Athens, February 24-28). Having set its journey off in Barcelona, twelve years ago, and with stops in cities around the world such as Sao Paolo, Berlin, Bogota and Santiago, IN-EDIT festival came to Greece last year and it is considered to be the biggest music documentary film festival in the world, aiming to link the two most important sectors of the cultural industry; music and cinema.

The Athens Print Fest is an International Festival on Printmaking, taking place in Athens for the third time (March 1 – 31). The Festival, organized by Greek Printmaker's Association (ΕΕΧ) and the Cultural and Athletic department of the Municipality of Athens, showcases sew and innovative engraving and print art created in Greece and abroad through exhibitions, presentations and lectures. 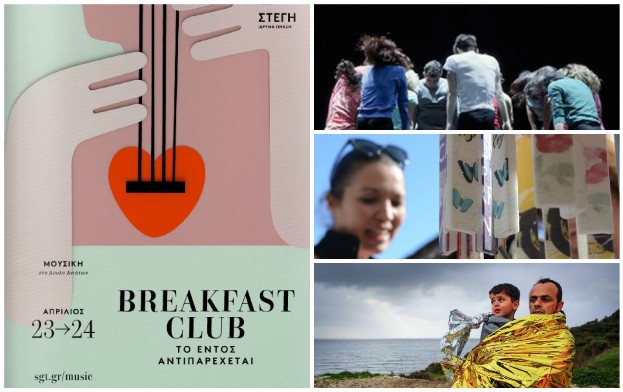 The Greek Film Archive, the Embassies and Honorary Consulates of African countries are organizing the 5th African Film Week, starting on Thursday, February 25th and until March 2nd. A total of 14 feature films and a documentary will be screened, from 10 African countries; South Africa, Angola, Kenya, Egypt, Ethiopia, the Democratic Republic of Congo, Morocco, Nigeria, Sudan and Tunisia.  Through this rich audiovisual trip to the African continent, the event aims to build a closer cultural understanding  between Greece and the participating African countries. All screenings will take place at the Greek Film Archive (48, Iera Odos & 134-136 Megalou Alexandrou streets) and admission is free.

SURPRISE, a charity exhibition for the support of the homeless of Athens, by the gallery/art platform artAZ, returns with its 7th annual edition. artAz partnered with KLIMAKA NGO and an army of Greek and International artists to support KLIMAKA’s Homeless Support Program. THE “SURPRISE” artworks are small-scale, signed on the back, so that the artist’s identity remains unknown, and are offered for a symbolic price (50 €).The proceeds from the artworks’ sale will be donated to the Homeless Support Program of KLIMAKA NGO. The exhibition will take place between 26-28 February 2016, at the «EARTH K44» space in Athens, Greece.

The Athens Concert Hall presents a Shakespeare’s Globe production of “Hamlet.” The Hamlet Globe to Globe tour of 196 countries began in 2014, reinventing Elizabethan traveling theater for today’s audiences, and will mark exactly 400 years since the Bard’s death on its final night in London in April. The production is directed by Dominic Dromgoole and Bill Buckhurst and alternating in the role of Hamlet are Ladi Emeruwa and Naeem Hayat. The cast also includes Keith Bartlett, John Dougall, Miranda Foster and Phoebe Fildes, among others. In collaboration with the British Embassy & the British Council in Athens, with Greek supertitles.