Cherry Tomato: A Lavish Product Made in Santorini

The island of Santorini is rightly renowned for its dramatic setting. Volcanic flows and scatterings of ash mark the countryside with their strange shapes and intensity of colours, while the steep walls of the caldera, hundreds of feet high, are dotted with white villages that perch over the calm blue waters of the Aegean. Less known are some of the agricultural products of the island.

Nesting in the volcanic soil of the island and absorbing the humidity of the caldera at night, the legendary ‘cherry tomato’ (Tomataki Santorinis) is deep red and firm outside, flaming red and juicy inside. Santorini’s cherry tomato is thicker skinned, sweeter, deeper red and larger than garden-variety cherry tomatoes. Never irrigated, the plants draw their moisture from their roots in the island’s volcanic soil, which harbours just enough moisture to make the intensely flavoured tomatoes thrive. Santorinian tomatoes have a distinctive flavor, small size and high sugars, making them ideal for the production of tomato paste.

For the traditional cultivation of tomato in February, small pits are dug in the ground within 30 cm from one another and with enough seeds thrown in (these are sun-dried so that they remain firm until they are sown). Harvesting takes place from late June until early August. In July, the fields –from the Oia valleys to the Profitis Ilias slopes– ring with the voices of people picking and carrying coffins full of delicious cherry tomatoes. The harvesting period is a real feast for the whole of island of Santorini.

The seed was first sown by a Christian monk in the year 1818. However, organized cultivation of tomatoes on the island began around 1875. According to folklorist Ioannis Kyriakos, at first, cherry tomatoes were cultivated for the nutritional needs of residents. This however changed following the October Revolution when all commercial transactions between Santorini and Russia were interrupted. In 1919, there was a switch from grape to tomato cultivation, as it was considered to be more profitable at the time. 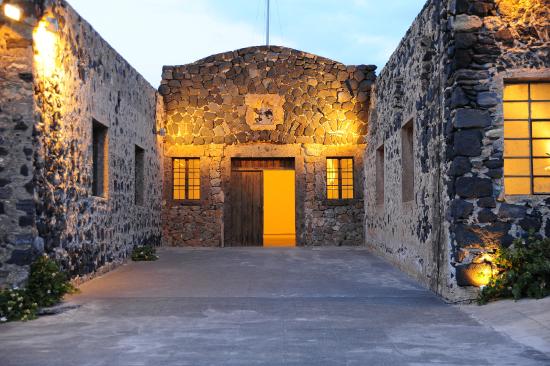 Soon after tomato cultivation began, the tomato paste industry was also set in motion. The first industrial unit was set up by Dimitrios Nomikos at Monolithos in 1922. Petros Nomikos, grandson of Dimitrios Nomikos, remembers the factory production during his childhood. “It was something like a social place for them, like the church on Sunday,” he notes. By 1940, there were three tomato-processing units in Santorini. Although the exact number of plants operating is not known, it is estimated there were nine at that time. Unfortunately, the devastating earthquake of 1956 forced the industries to either close down their factories or move to other regions of Greece. Today, the historical tomato factory of Nomikos in Vlychada has been transformed into a modern Industrial Tomato Museum, offering its visitors a journey back to the industrial past of Santorini, by guiding them through the cultivation and processing of tomatoes.

Another heavy blow to the tomato industry came when tourism became a more lucrative venture for most Santorinians. A flourishing industry would have absolutely vanished if it had not been for the Union of Santorini Cooperatives. The Union, operating since 1952 in Monolithos, supported those islanders who kept cultivating the cherry tomato. Equipped with modern machinery and infrastructure, the Union continues to play a significant role connecting the production, promotion, distribution and selling of the Santorini tomato. Mattheos Dimopoulos, General Manager of the Union, is very optimistic in view of the continuously increasing rate of local production and the worldwide recognition of the high quality and value of Santorini products. 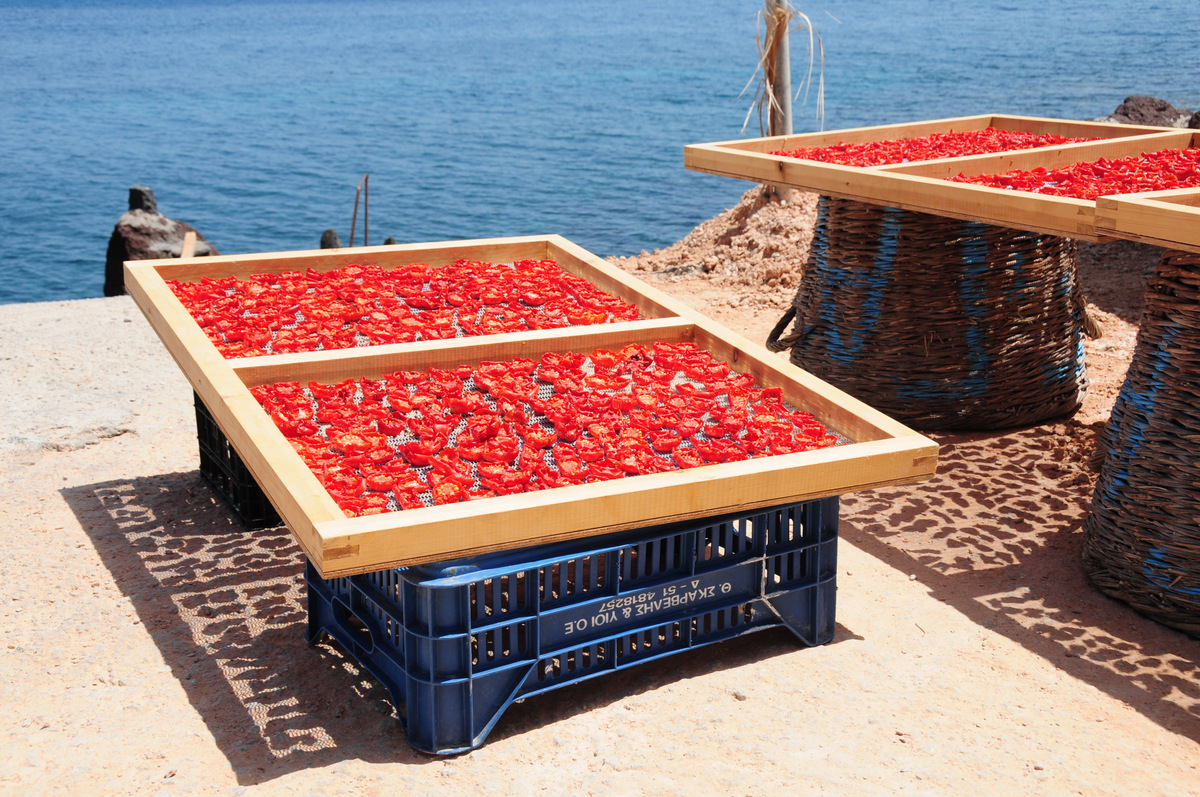 The European Commission has awarded “Tomataki Santorinis” a Protected Designation of Origin (PDO) and Protected Geographical Indication (PGI). Scientific analysis has revealed the Santorini product bears yet more advantages over the larger and more prevalent kind of tomato. It has been found to have more ascorbic acid (another name for Vitamin C) and more soluble phenols. It has also been shown to contain the largest amount of lycopene in any known fruit or vegetable. Lycopene is a carotenoid with strong antioxidant activity, acting as a preventive agent for all kinds of cancer, while it also works in potential cases of atherosclerosis by protecting plasma lipids against oxidation.