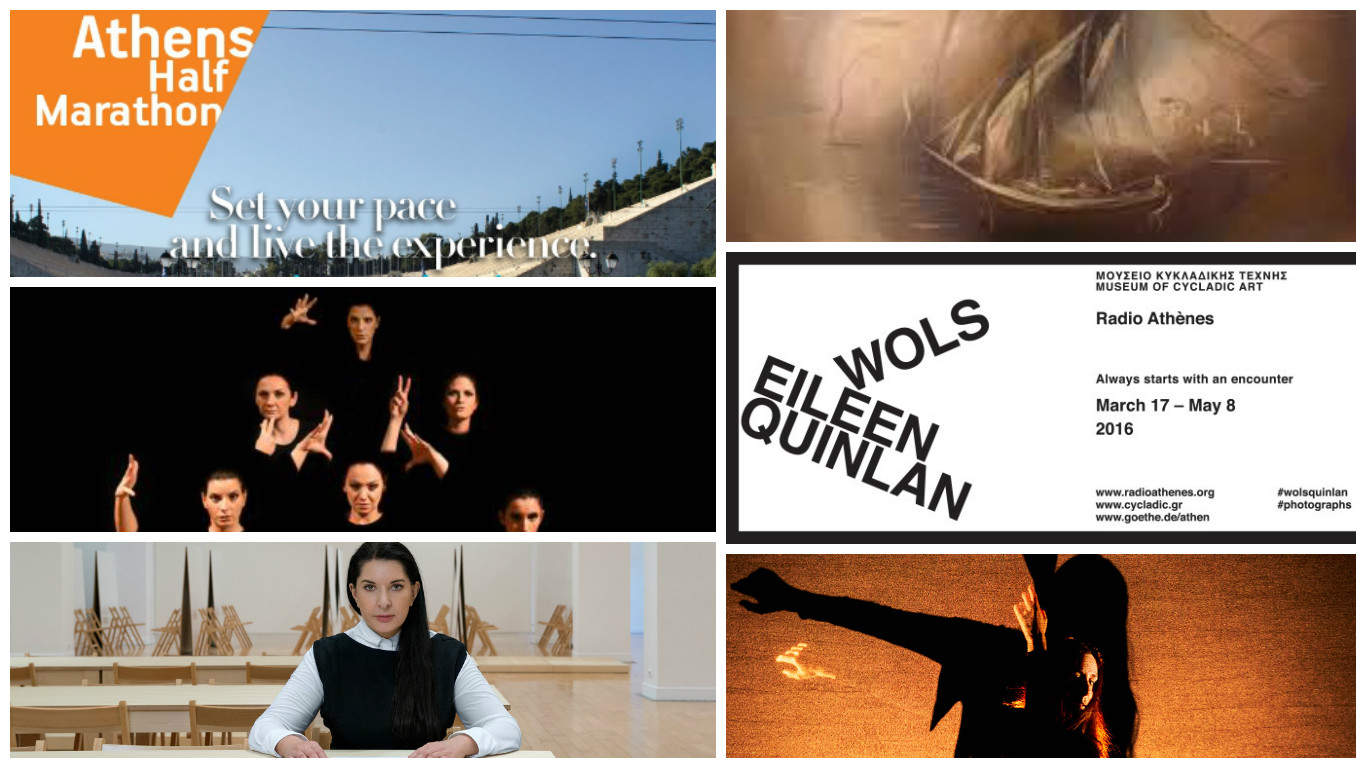 The Athens Half Marathon, acknowledged as a major national, cultural, tourist and sports event, invites all runners from Greece and abroad to join the 2016 run, this Sunday, March 20, and lighten with their smiles Greece’s famous capital. The Half-Marathon has been taking place since 2012 as an annual key event for the city, that creates a unique celebration mood for all those who wish to enjoy Athens’s beauty, while running on its vehicle-free central streets.

The Foundation B. & M. Theocharakis presents the exhibition "George Gounaropoulos and poetic symbolism. Paintings 1912 - 1976 ". The exhibition, which is ongoing until May 13, showcases 100 artworks by George Gounaropoulos, one of the most renowned Greek artists whose paintings have a particularly dreamy and lyrical quality.

The major collaboration between NEON and MAI (Marina Abramović Institute) enters its second week at Benaki Museum, providing a unique interactive cultural experience for the public. Marina Abramovic will also give two lectures during this period, on “the History of Performance Art” and “Terra Comunal”

“Always starts with an encounter” is an exhibition presenting the photographic work of German born Alfred Otto Wolfgang Schulze (1913-1951), known as Wols, and American artist Eileen Quinlan (born 1972). The double show of two artists separated by time, historical circumstances and distinct photographic processes operates as a field in which parallels are drawn (in a play of transpositions). The exhibition takes place at the Cycladic Art Museum (March 17- May 8, 2016).

Eight extracts of ancient tragedies are presented at Michael Cacoyannis Foundation, under the title From Darkness to Light (from March 17, 2016). The play will be performed by the theatrical group of “Deaf Crazy Colours” - four deaf actors who use the body language as well as the Sign Language - along with two hearing actors who will lend their voices, thus creating the sensation of a unique experience to be shared by both deaf and hearing public.

Conceal - Reveal, the brand new work from the distinguished dancer and pioneering choreographer, Russell Maliphant (Αssociate Αrtist in the internationally acclaimed Sadler’s Wells company) who is celebrating, this year, 20 years of creative production, will be presented at the Athens Concert Hall (Megaron, 19-20 March).