Atlantis Books in Santorini is the most interesting bookstore in the world, according to leading National Geographic magazine. That’s another yet distinction for the legendary bookshop, which has gained international attention and acclaim since 2005, when Guardian first placed this “dream of a bookstore” among its top 10 bookstores worldwide. 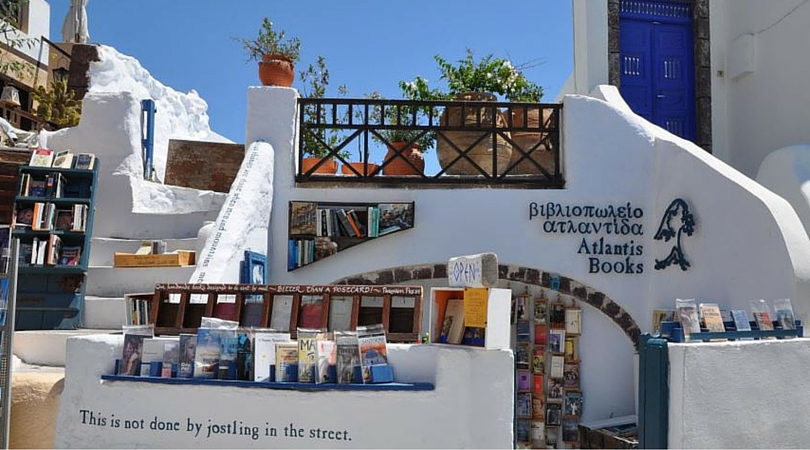 Atlantis Books was founded in 2004 by a group of young American and European book lovers who happened to find themselves stranded in Oia, Santorini, with no more books to read and no bookstore to buy them either. The story has it that Craig Walzer and Oliver Wise first conceived the idea of the bookstore after a few too many glasses of wine and managed to pull it off mainly because they persuaded four of their friends to join them.Oliver named it Atlantis Books and the two laughed about how their children would run it someday.

Over the next few years, the bookstore became a main staple of the Santorini experience. Through hard lessons and mishaps, months of fundraising, sleeping on beds incorporated into the hand-made bookshelves and managing a never-ending rotation of employees from all over the world, Craig and his friends managed to build a business that not only met their dreams but probably exceeded them. 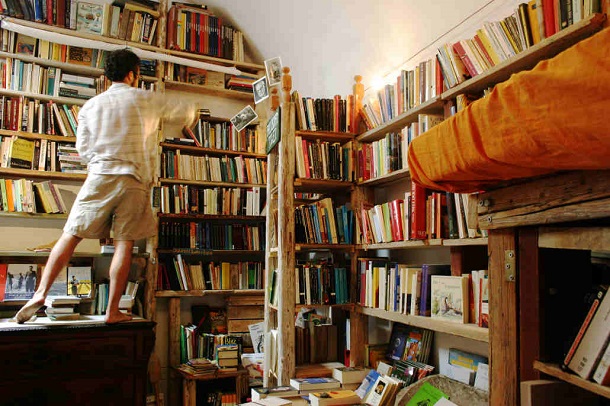 The cave-like setting of Atlantis Books makes for a perfect reading nook. The bookshelves, which the staff built themselves, are filled with novels, poetry, short-story collections, biographies and philosophy tomes. As Lonely Planet described it, it is "a true heaven for English-speaking bookworms, offering a wide variety of literature, poetry and philosophy".

They even created Paravion Press, a home-run publishing house that both satisfies the founders’ literary obsessions and provides an additional revenue stream indispensable to the business. Paravion was built around the idea that “the future of books lies in looking at books as works of art” and has given birth to a host of artful publications that are a joy to leaf through.

Yet, Atlantis Books offers its fans much more than just good books. Besides their annual Caldera Arts and Literature Festival, which has been held since 2011 bringing together Greek and foreign writers and musicians, the bookstore also hosts book readings, film screenings, jazz nights, food festivals and dance parties throughout the year. 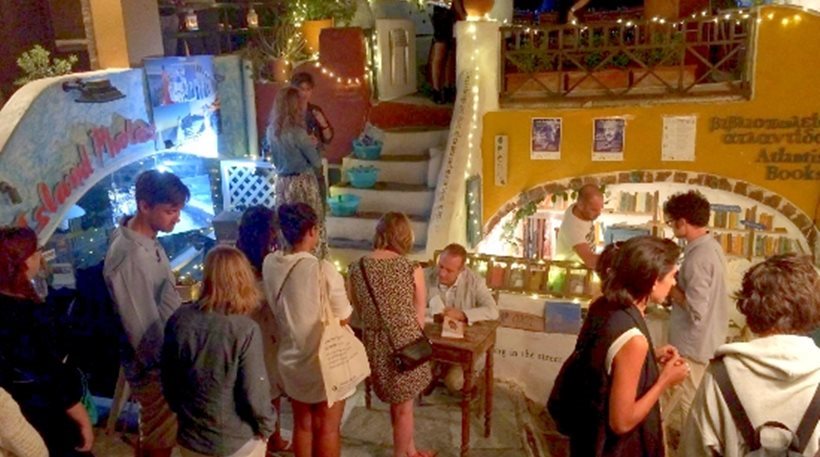 It is no surprise, that by the end of 2014, Walzer was pondering on the idea of creating a writers’ and artists’ residency in Santorini, which would hopefully become “the coolest artists’ residency in Europe”, when disaster struck: the owner of the house that has accommodated the Atlantis bookstore came in with the news that he was ready to sell the property to someone else. Realizing what this loss would mean for the business, Walzer suggested a deal: would the owner be willing to sell the property to them, if they managed to secure the same amount of money by the fall of 2015? The guy replied that he would, signalling the start of a fundraising race that is going to decide the future of Atlantis.

What if Atlantis fails to secure the money it needs? Is it actually important for a mainly foreign-language bookstore to exist on a Greek island? Is it even realistic for a traditional bookstore to thrive in a place of indescribable natural beauty and wild touristic development, where people usually come to enjoy more sunsets than books, more custom-set wedding photographs than real cultural adventures?

In a rather paradoxical way, through its sheer existence and of course through its commendable work in favor of the Santorini community, Atlantis manages to be both an actual pole of attraction and a balancing force to the touristy character of the place. Atlantis Books stands for something much bigger: its story serves as a standout for ethical business, for working hard and doing your best within a country that often does not appreciate difference, creativity and entrepreneurial spirit.