Austerity Mesures is a collection of Modern Greek poetry, published this April by Penguin and edited by Karen Van Dyck, Professor of Modern Greek Literature in the Classics Department at Columbia University.

Professor Van Dyck is the author of Kassandra and the Censors: Greek Poetry Since 1967 (Cornell, 1998), her recent translations include The Scattered Papers of Penelope: New and Selected Poems by Katerina Anghelaki-Rooke (Graywolf, 2009) and the  co-edited anthology The Greek Poets: Homer to the Present  (Norton, 2009). Besides these projects she has published articles on Diaspora literature, the Language Question, translation and multilingualism and has directed the Program in Hellenic Studies at Columbia since 1988. 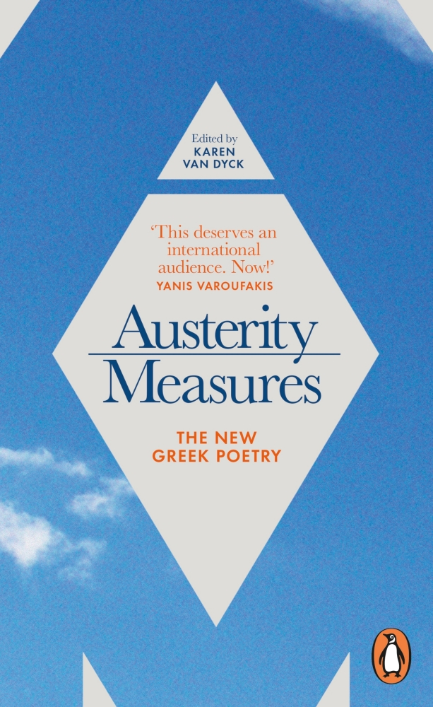 Since the crisis hit in 2008, Greece has played host to a cultural renaissance unlike anything seen in the country for over thirty years. Poems of startling depth and originality are being written by native Greeks, émigrés and migrants alike. In Austerity Measures, the very best of the writing to emerge from that creative ferment is gathered for the first time, creating a map to the complex territory of a still-evolving scene - and a unique window onto the lived experience of Greek society now.

The book’s editor, Karen Van Dyck wrote in the Guardian about poetry in Greece since 2008:  “Poets writing graffiti on walls, poets reading in public squares, theatres and empty lots, poets performing in slams, chanting slogans, and singing songs at rallies, poets blogging and posting on the internet, poets teaming up with artists and musicians, teaching workshops to school children and migrants. In all of the misery and mess, new poetry is everywhere, too large and too various a body of writing to fit neatly on either side of any ideological rift.”

She goes on to say that the anthology Austerity Measures samples the living tradition of poetry in Greece, “bearing witness not only to the hard lives being led in Greece and the Balkans today, but also to what poetry does best: offer new ways to imagine what can be radically different realities. From the lyrical dream fragments of Anna Griva to the apocalyptic neorealism of Stathis Antoniou to Thomas Tsalapatis’s wry postmodern prose poems, nothing here is as one might expect, even from the Greek poetry of the recent past. Not many statues; not much myth, at least in the classical sense; no patriotism; not even the very intense light or references to the sea we know from the Nobel laureates George Seferis and Odysseas Elytis.”

As  Kate Kellaway writes in her review of the book on the Observer: “Most poems here do not overtly address the crisis. But the collective spirit is new-minted, unmediated and bracing (the quality of translation high). The work is inevitably uneven but the anthology excites partly because (in refreshing contrast to much of what one reads in English) so many of these poems needed to be written.”

I have no fatherland
I live within words
That are shrouded in black
And held hostage
Mustapha Khayati, can you hear me?
The seat of power is in language
Where the police patrol
No more poetry circles!
No more poet laureates!
In my neighbourhood virgin poets are sacrificed
Rappers with dust-blown eyes and baggy pants
push rhymes on kids sniffing words
Fall and get back up again: the art of the poet
Jean Genet, can you hear me?
My words are homeless
They sleep on the benches of Klafthmonos Square
covered in IKEA cartons
My words do not speak on the news
They’re out hustling every night
My words are proletarian, slaves like me
They work in sweatshops night and day
I want no more dirges
I want no more verbs belonging to the non-combatants
I need a new language, not pimping
I’m waiting for a revolution to invent me
Hungering for the language of class war
A language that has tasted insurgency
I shall create it!
Ah, what arrogance!
OK, I’ll be off
But take a look: in my face the dawn of a new poetry is breaking
No word will be left behind, held hostage,
I’m seeking a new passage.