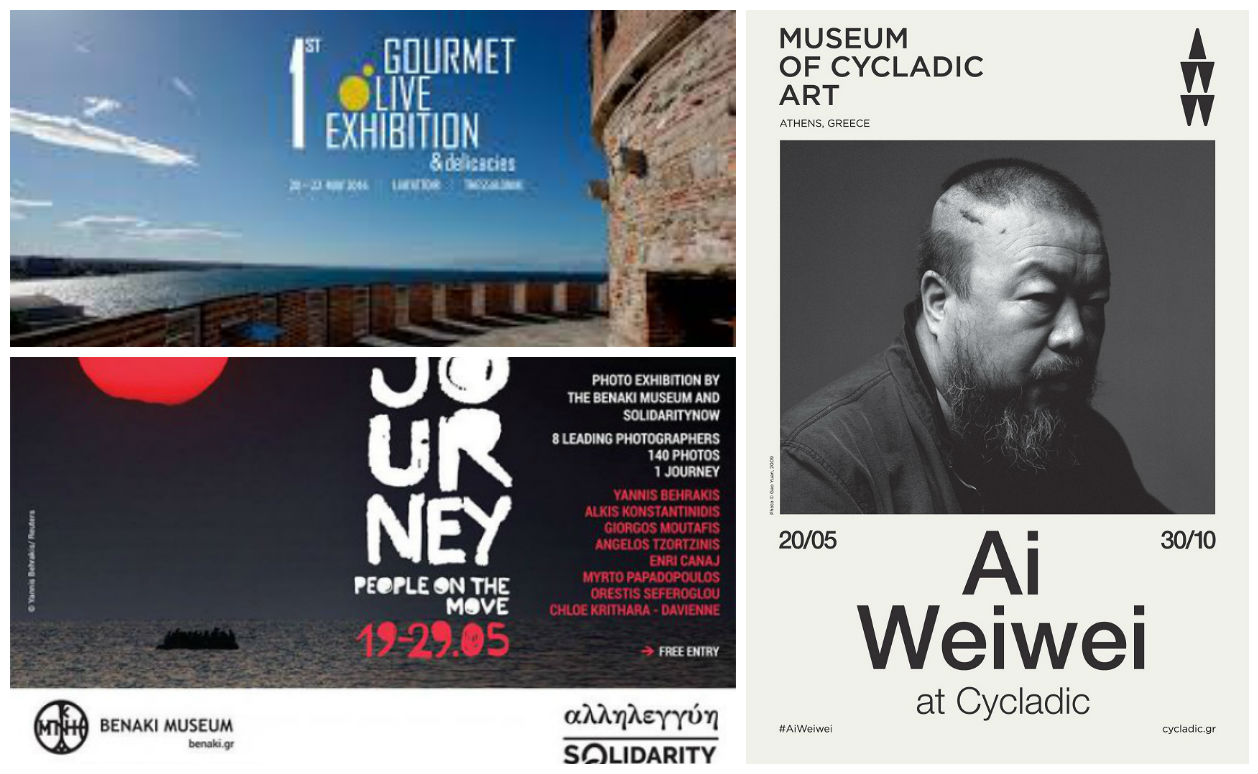 The Museum of Cycladic Art (MCA) in Athens presents a major exhibition with Chinese artist and activist Ai Weiwei. Ai Weiwei at Cycladic (20 May – 30 Oct 2016) will be the artist’s first exhibition within an archaeological museum to date. This exhibition will introduce audiences to his practice through many of his significant works, placing them within the museums renowned collection. Ai Weiwei will also unveil new works inspired by the permanent archaeological collection of the museum. The artist’s collaboration with MCA begun in 2015 and following the Museum’s invitation, he visited Athens as well as the island of Lesbos. He has since set up a studio on the island to create art that will draw attention to the refugee crisis in Greece. 10% of all exhibition takings, merchandise sales and sponsorship funds will go directly to a number of hand selected NGOs working throughout Greece to help the refugee crisis.

With a first preview that took place on May 16th, the photo exhibition entitled "The Journey. People on the move”, which is co-organized by SolidarityNow and  the Benaki Museum, is officially taking place from May 19th until May 22nd in an effort to present the work of 8 renowned photographers/photojournalists from Greece, (Yannis Behrakis, Alkis Konstantinidis, Giorgos Moutafis, Angelos Georginis, Enri Canaj, Myrto Papadopoulos, Orestis Seferoglou, Chloe Kritharas- Devienne)  who have captured with their lenses the Journey, “the route taken in the past year by migrants and refugees, legal and irregular, everyone, claiming their right to life”. The images trace their journey from Turkey to Greece, with final destination the borders, hoping to reach a safe haven in any country in Europe.

The first "Gourmet Olive Exhibition & Delicacies" will be held in Thessaloniki on May 20-22 in order to promote the excellence of the Greek gastronomic heritage, which is based in extra virgin olive oil. It is an exhibition of extra virgin olive oil, olives and delicatessen products, accompanied by events, workshops, seminars, olive tastings, cooking demonstrations, and public awards. A modern Olive Oil Bar will also be set up offering the public the opportunity to taste and discover different varieties of olive oil and olives from all over Greece. Professional connoisseurs along with olive oil producers will lead the tastings. During the tasting shows, innovative products will be introduced and renowned chefs will cook using the products exhibited.  The aim of the Gourmet Olive Exhibition & Delicacies is to become one of the most important trading venues in the region, by playing a leading role in facilitating small producers and promoting the benefits of consuming high quality olive oil products. 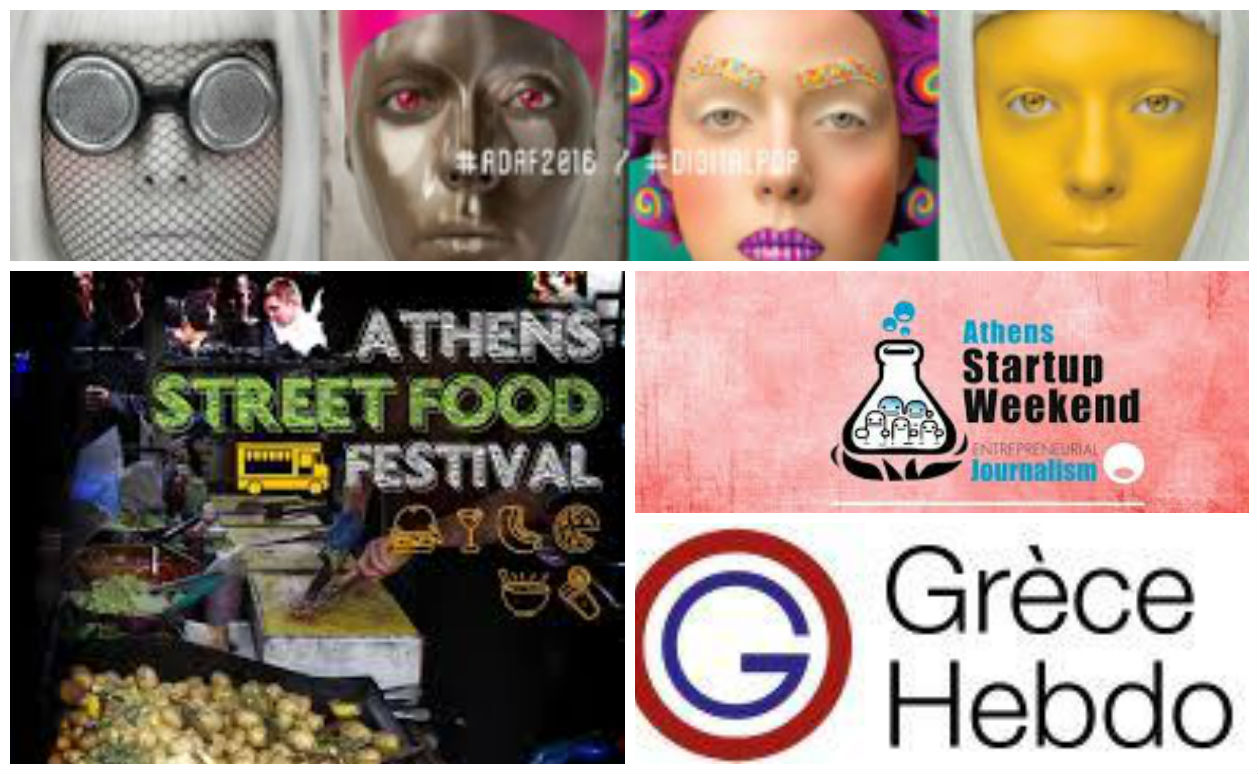 Grèce Hebdo, the French language website of the Secretariat General for Media & Communication, is organizing at “Lexikopoleio” bookshop a two day event regarding the “Greek Literature in French”, where 12 Greek poets and 5 new Greek authors, whose works have been translated in French, will present their works and exchange views with the audience on poetry and novels. Translator and publisher of Greek poetry & literature in French, Michel Volkovitch, will present the authors and discuss with them the different aspects of Greece, as presented through their collective works, as well as the perception of Greek literature in France.

Athens Digital Arts Festival, is an International Festival which celebrates digital culture through an annual gathering, bringing together a global community of artists and audiences. From 19th to 22nd of May the ADAF returns with its 12th edition at the historic center of Athens under the theme of Digital Pop, and invites guests to its annual four-day meeting. In addition, ADAF 2016 will present artworks and AV performances at the multiplex art space SIX D.O.G.S. and organise evening open air screenings at St. Irini Square in an effort to encourage, stimulate and promote all aspects of digital creativity by hosting local as well as international artists and communities. Through its multidisciplinary program ADAF offers a wide range of Exhibitions, Screenings, Live Performances, Workshops and International Tributes showcasing artworks that display distinctive characteristics of the digital medium and reflect on its language and aesthetics.

The first Athens Startup Weekend Entrepreneurial Journalism  event will be held at theImpact Hub, in Athens, in an effort to promote entrepreneurial action for innovators in journalism and media. Organizers are calling participants to launch their journalism, media, communication and innovation startup ideas and make the first step into prototyping and launching with their teams new business models for news and media content.

The 1st Athens Street Food Festival opens its doors and welcomes favorite "street" delicacies from across the world, in the heart of Athens. This celebration of taste is part of a widespread trend across the world: corners and spots that hide special secret recipes of delicacy and everything that makes it so loved the street gastronomy, is gathered in one spot for you to discover. In a space area of 4,000 sqm in the historic space of the Old Amaxostasio of O.S.Y at Gazi (Pireos and Ermou) the guests will be able to try special, street food editions from dozens of kitchens, from Europe, America, Asia and Africa. The unique tastes of the 1st Athens street food festival will have a festive mood with the DJ sets from popular radio producers and live concerts given by favorite artists.