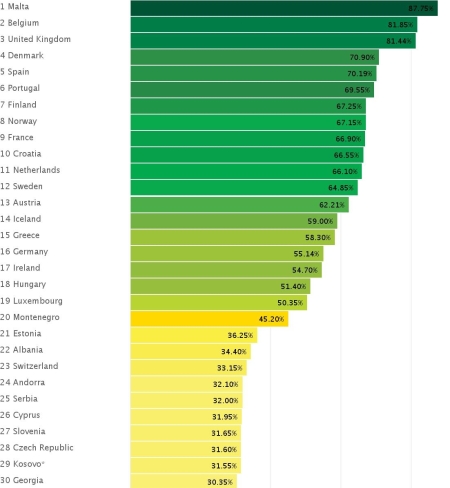 ILGA-Europe is an international non-governmental umbrella organization, part of the European Region of the International Lesbian, Gay, Bisexual, Trans & Intersex Association (ILGA), working for equality and human rights for LGBTI people. The organization published recently its 2015 Annual Review of the Human Rights Situation of LGBTI people in Europe.

Marking a significant improvement, Greece ranks at number 15 out of 45 European countries reviewed, above countries such as Germany, Ireland, Luxemburg, Switzerland, etc. ILGA-Europe bases its ranking on how the laws and policies of each country impact on the lives of LGBTI people,   using a wide range of indicators such as family law, hate speech, legal gender recognition, freedom of expression and asylum rights.

According to the report on Greece, the county has progressed a lot during this past year: “2015 proved to be an eventful twelve months for LGBTI activists in Greece. The election of a government led by SYRIZA, a long-time supporter of equality for LGBTI people, in January started the year on a hopeful note. Promises to introduce civil unions for same-sex couples were quickly reaffirmed but access to adoption was omitted and legislation was slow to progress. In December, civil partnership for same-sex couples was finally introduced by a large majority of parliamentarians. Intersex people were recognized in legislation for the very first time”.