In this week's Events and Culture Agenda in Greece: the Athens Technopolis Jazz Festival, an international conference on Mobility Managment, a mountain running race on the island of Tinos, an Economist conference on digital strategy and the Medieval Rose Festival in Rhodes. For a taste of Greek culture in the US,  the Los Angeles Greek Film Festival is taking place this week.

The Technopolis City of Athens and the Onassis Cultural Center join their forces again this year for the 16th edition of the Athens Technopolis Jazz Festival, one of the biggest and oldest festival of Athens. After last year's successful anniversary that attracted more that than 30,000 people in five days, the festival returns with jazz sounds by 18 music groups and ensembles, as well as a full list of parallel events for younger and older audiences. From classic jazz and funk to jazz with lyrics and vocals and Afropop, the "Athens Technopolis Jazz Festival", attracts an audience so diverse as the types and styles of jazz music it presents.

The Municipality of Athens, jointly with the Laboratory of Transport Engineering of the Aristotle University of Thessaloniki, the Transport Systems Laboratory of the University of Piraeus, and withEuropean Platform on Mobility Management(EPOMM) organize the 20th European Conference on Mobility Management -ECOMM 2016, which will take place for the first time in Greece at Technopolis – Gazi in Athens, on June 1-3.

The main theme of ECOMM 2016 is ‘Smart Solutions for People and Cities’ and concerns all those solutions, either traditional or innovative ones,that will make the everyday life of trip-makers easier and the cities function smarter. The conference motto is “Think Green, Travel Smart” but also “Think Smart, Travel Green”, focusing on people’s mobility needs and on all policies and solutions by the public or the private sector that facilitate people to make choices in favor of Public Transport or other environmentally friendly modes. 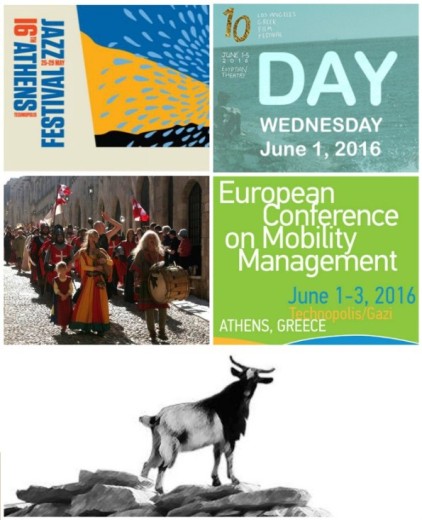 The 2016 LAGFF takes place at the Egyptian Theatre, June 1-5, showcasing a rich and diverse film line up, ranging from classics such as Evdokia to new critically acclaimed arthouse films like Chevalier and Suntan.

Tinos Challenge 2016, the 1st vertical running race in Greece, will be held on May 28-29, at the island of Tinos. Athletes will have the opportunity to run through ancient and modern paths of the Tinos island, experiencing the cultural heritage and geographic uniqueness of Tinos, especially of the northwest side of the island.

Tinos Challenge is part of the Cyclades Trail Cup, which is organized for first time this year. Cyclades Trail Cup includes events in several islands (Tinos, Andros, Syros) and aims to highlight the natural beauty and special features of each island as well.

The Intelligent Leaders Summit entitled “Oxygenating the Future through Digital Strategy”, is going to take place in Astir Palace, Vouliagmeni on Thursday, May 26th 2016.  At a time when the current political and economic climate remains a challenge for all business leaders worldwide, the Intelligent Leaders Summit aims at demonstrating the leading role of digital strategy with respect to a prosperous future.

The conference is organized by the Economist and among the speakers are: John Andrews (Consultant editor, The Economist), Joschka Fischer (Former vice chancellor and former minister of foreign affairs, Federal Republic of Germany), and Lois Labrianidis (Secretary General for Strategic and Private Investments, Ministry of economy, Development and Tourism).

During the Medieval Rose Festival οf Rhodes, the history, traditions and legends of Medieval Rhodes are recreated through happenings, games, medieval music & dancing events, re-enactments, fire shows, trots, games, swordfights, archery and creative workshops. From the May 27-29, you can relive the Byzantine and Medieval history of the island in the backdrop the wonderful scenery of the Medieval Town of Rhodes, one of UNESCO’s World Heritage monuments.