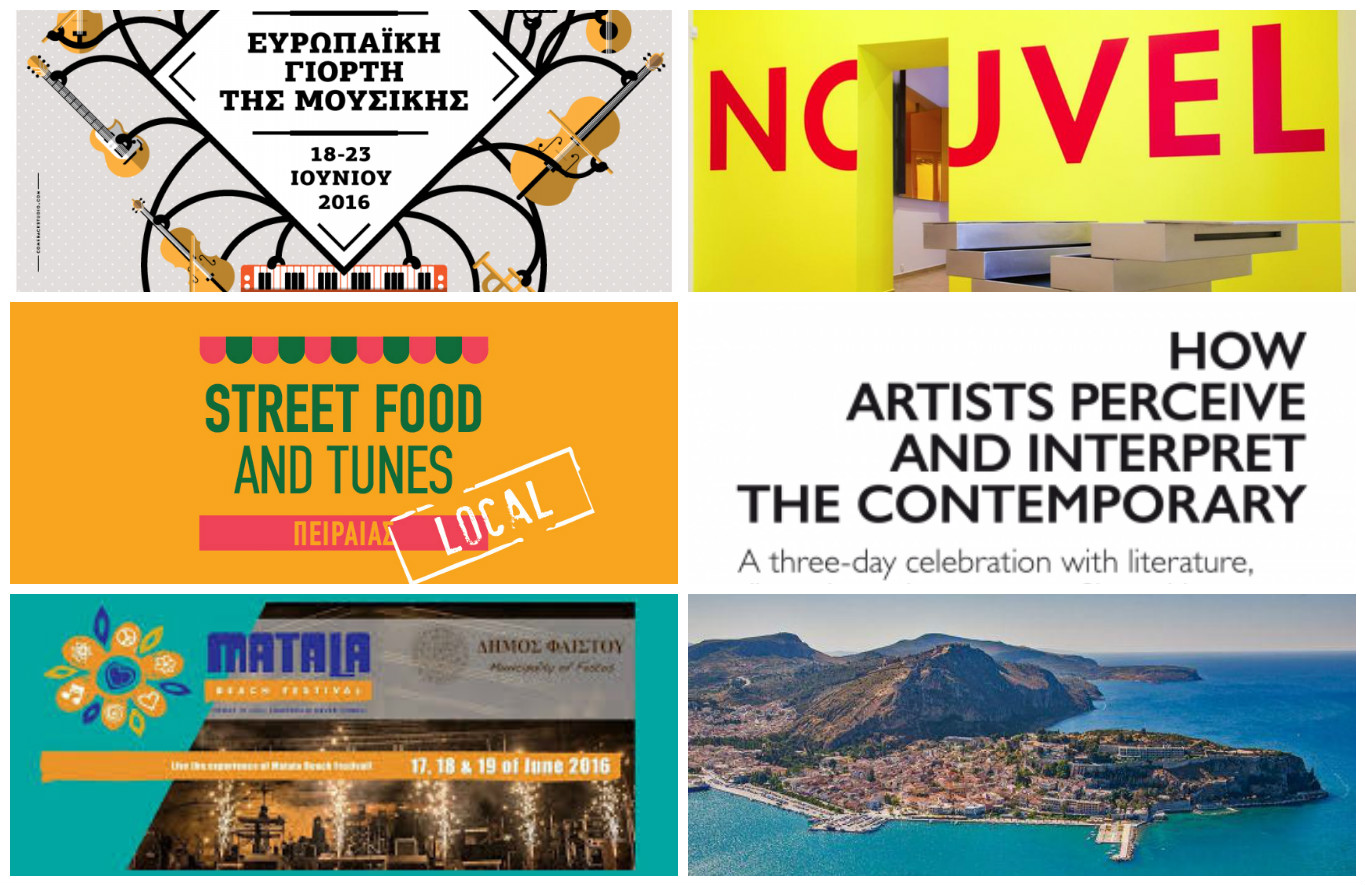 The 17th edition of the European Music Day, Greece’s biggest open air music event, hosts numerous festivities all over Greece from June 18 to 23. Hundreds of artists, bands and orchestras are given the opportunity to present their work to a diverse audience. This year more than 35 cities and 200 locations will host the celebrations in which 450 bands, orchestras, choirs etc will participate. Classical music in archaeological sites, Jazz and traditional music in gardens, Blues, Rock and Hip-Hop in pedestrian areas and, of course, many live stages in hundreds of squares are included in this year’s programme. Entrance is free. Stay tuned to enjoy it!

Over the course of a weekend, from June 17 to 19, authors, artists and people of culture will gather for the NOW Literature Festival: emerging young voices from the Balkans will meet their Greek counterparts to discuss literature and its role in the current European and international context. The motor behind the event is the Finnegan's List, a project sponsored by the European Society of Authors, in which eminent authors from all over the world recommend books from past and present -- works that can help us to understand the world of today. In addition to literature, a series of round table discussions on translation, cultural policy and documentaries will offer stimuli for reflection, debate and entertainment.

The Gagosian Gallery in Athens presents an exhibition of works by acclaimed French architect Jean Nouvel: “Triptyques,” a series of limited edition mirrors, and a “Boite a outils” (Tool Box), the artist’s reinterpretation of the household staple streamlined and endowed with additional features. The display runs through July 30.

Street Food and Tunes by deBop is the Athenian version of the big food markets abroad. It is a celebration around "a table" whose main axis is eating and socializing that occurs through this. Since December 2013, deBop has "traveled" to countless destinations in the world, has experienced new tastes and suggests new culinary trends through an event that is appreciated by the Athenian people and the cuisine specialists (chefs, cooks, food bloggers) operating in the city. The event takes place on June 16.

The famous Matala Beach Festival will take place for the sixth consecutive year from June 17 to June 19, 2016 in Matala, Municipality of Festos on the beautiful island of Crete. Music will once again signal the beginning of this festival which guarantees to offer memorable moments to all visitors of Matala Beach in early summer. This year’s line-up includes great artists such as Kostis Maraveyas, Tonis Sfinos, Onirama, Koza Mostra, Filippos Pliatsikas and many others to be announced.

Nafplio Energy Triathlon, a fascinating Triathlon race takes place in the city of Nafplio (Peloponnese) on June 19. The Triathlon is open to all athletes and includes swimming (750m), cycling (20km) and running (5km). All fans of Triathlon will have the chance to race in the historic city of Nafplio where they can admire the fort Palamidi, the impressive rocky peninsular of the Akronafplia and the spectacular Bourtzi that has become the Nafplio trademark. The less experienced athletes can take part in the Aquathlon race which includes swimming and running.