Work has begun early this month to save the holiest shrine in Christendom. A place of pilgrimage, faith passion and mystery, the Church of the Holy Sepulchre in Jerusalem is one of the most popular religious sites in the world. The cavernous basilica, filled with obscure niches, secret Crusader tombs, and hidden chapels and golden icons, marks the site where Catholic and Eastern Orthodox faiths believe that Jesus died, was buried and rose. 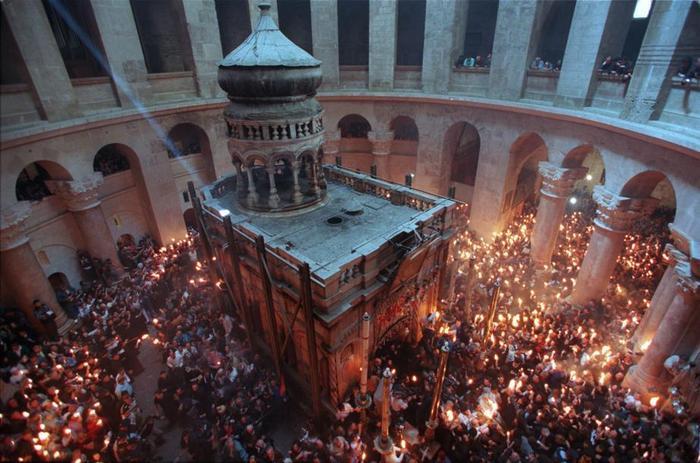 A team of nine Greek experts - who have done similar restoration work on the Acropolis as well as to Byzantine churches throughout the Mediterranean – have been tasked with preserving, restoring and reinforcing the Edicule – the chamber housing the tomb where Jesus was thought to have been laid to rest before he was resurrected. Antonia Moropolou, an architect at the National Technical University of Athens – (NTUA), which is supervising the renovation, noted the intricacy of the historic effort. "Nobody envies this responsibility and challenge," she said. "Because, it is a challenge to work here in this ambient of an open monument visited by thousands of people daily." Moropoulou said the tomb is stable, but needs urgent attention after years of exposure to environmental factors like water, humidity and candle smoke. In addition, the structure needs to be protected from the risk of earthquake damage.

The idea is to peel away hundreds of years of the shrine’s history, clean it and put it back together. To fix the chapel, which is buckling under its own weight, the crew will have to enter a few square meters of the ruins of the first-century tomb. To get there, they will clean centuries of candle soot left from votive lamps; they will reset and anchor the imported marbles; and they will inject 21st-century stabilizing mortar into 12th-century masonry from the Crusader times. And at the heart of the heart of the edifice, in the center of the Church of the Holy Sepulchre in the Old City of Jerusalem, they will lift the slab where millions of pilgrims have knelt and prayed. And for the first time in more than 200 years, they will look inside. 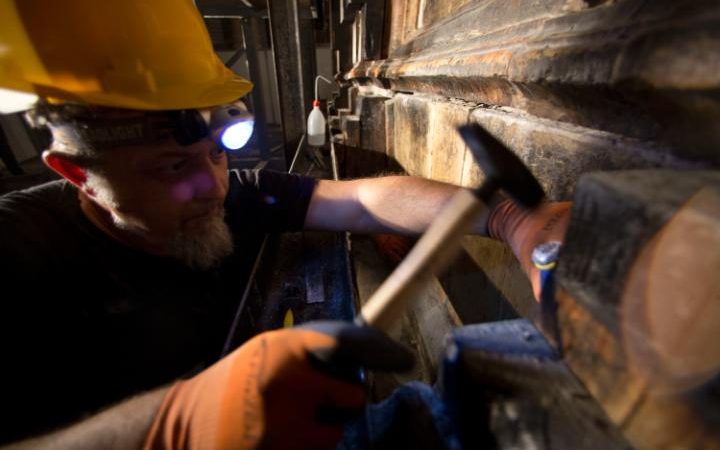 The conservationists are not sure what they will find. The British archaeologist Martin Biddle, who studied the site in the 1990s, speculated that there could be ancient graffiti left by pilgrims somewhere around the Holy Rock or beneath the floor under the rotunda, perhaps scribbles of “He is risen!”Or maybe the small, scratched crosses left in the caves of Christians in the first centuries after his death. Or maybe just cut stone.

The Church was last renovated over 200 years ago. The project comes as disagreements and tension between the Roman Catholic, Armenian and Greek Orthodox churches, whom all have some ownership and responsibility for different sections of the church, has delayed the much needed restoration. But after Israel's Antiquities Authority deemed the building unsafe and it was briefly shut down by police last year, the three denominations were forced to overlook their differences and get the restoration effort underway. "What has happened is a very good sign, a sign of togetherness," Greek Orthodox Patriarch of Jerusalem Theophilos III said. 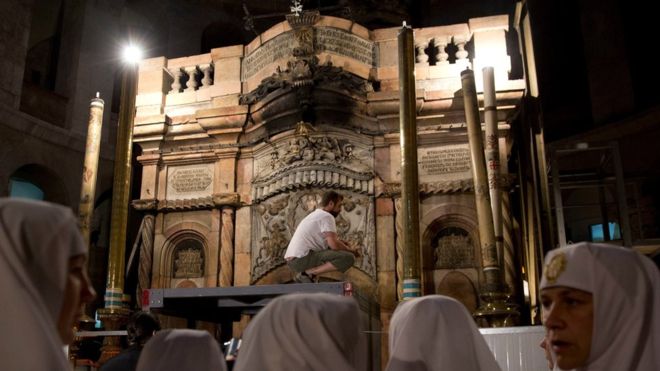 The $3.3 million restoration is funded by a personal donation by King Abdullah of Jordan and the work, based on a specific project carried out by the National Technical University of Athens, is expected to take between eight and twelve months and during that time pilgrims will be able to continue visiting the site. Moropoulou said she hoped it would maintain the intangible spirit “of a living monument.” “This tomb is the most alive place than anything I have seen in my life. The greatest challenge is to preserve that”.