The Ark of the World: A Superbrand of Love and Solidarity

“Faith is something you experience. Nobody can take it from you.” Father Antonios Papanikolaou.

It was 1998 and a young orthodox priest who had just received his ordainment in the parish of Agios Georgios Church in the area of Kolonos-Attica, felt the need to reach out to his community by giving a second chance to children who were living under conditions of total negligence and abandonment.

Back in the late ‘90s that particular area of western Attica was one of the most difficult regions to live in, troubled by cases of drug trafficking, gang crime and social exclusion mainly for the young.  For the 27 year old Father Antonios Papanikolaou, this was the ideal place to take action. “I was watching from my window, young abandoned kids, involved in drugs and completely wretched. I started wondering what could I do to help them? At first, it started with a group of young adolescents. I approached them and asked them to join me at a basketball game… I sat down and listened to them, I accepted them exactly like they were. I realized that my flock was out and not inside the Church”,he explains in one of his interviews and underlines that by joining these children in their space, their home, the neighborhood square or the field, he saw their positive features emerging through sports and tournaments. “When someone is that desperate, like they were what can you really tell them? That Christ will save them? They will not pay attention”, sites the active priest who soon realized that in order to make a difference to the lives of these children, he needed to create a safer place for them, where they would be nurtured and loved. At first he used his own home. And when that space proved too small, he rented another space, an abandoned cafeteria, where he was able to receive the growing number of socially excluded children who were daily experiencing abandonment, indifference and racism. The "Ark of the World", a Non-Profit Organization for the Special Care and Protection of Mothers and Children, was thus born, in order to create programs of support with an ultimate goal to help the children of the area return to school and complete their education. 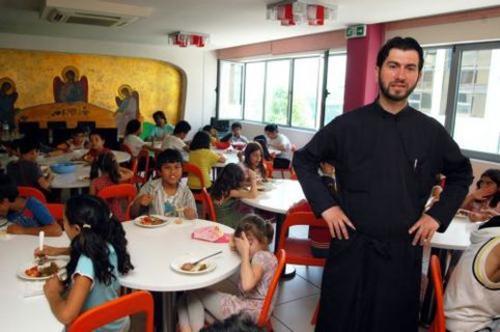 Father Antonios did not have a specific plan in mind, when he set the whole project in motion. “One thing led to another. The children were sick. So we said, we need to cook in one corner (of the shelter) and teach them in the other corner. Then the homeless came in, so we put beds. Then we built bathrooms so that the children could bathe and one thing led to another”. As soon as people started getting acquainted with the work of the young priest, they gradually joined his cause by volunteering to the work of “The Ark”, teaching the children, cooking for them or bringing them clothes, shoes and toys. But from the very beginning, the message was that “The Ark of the World” was a place for everybody, regardless of ethnicity or religion. It was through the relentless work of Father Antonios that his community was persuaded to accept and support immigrants and not exclude them or marginalize them. “How can a refugee survive unless you educate and help him find his way? He will be otherwise forced to steal! I approached the immigrants’ and refugees’ children and explained them the history of our fathers and grandfathers…. We know what the words “refugee”, “racism” and “death” mean. If everyone took action in his neighborhood we wouldn’t be facing this huge problem with foreigners who cannot leave the country and are pushed into the margins of society! So, we can either lock ourselves inside our homes or help them stand on their feet!” 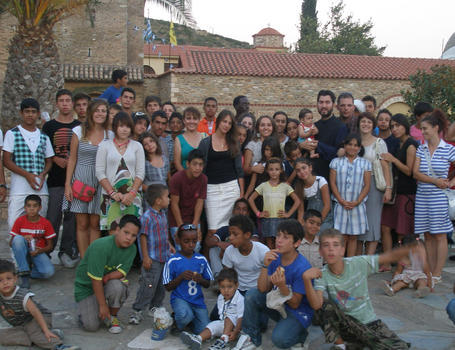 Despite the numerous difficulties and adversities, Father Antonios remains optimistic and never loses his hope and dedication to his goal: to always find ways to help as many children as possible! With the support of numerous volunteers, they are providing today help to approximately 500 children from Greece and abroad, aged as young as infants to 18-year-olds, making the centre of Athens a community of compassion and love. The Ark offers food to 1.300 people on a daily basis (mostly homeless mothers with their children, including refugees and non-refugees) and meets the needs of children for their education as well as clothing, footwear, medical and dental care through the work of volunteers. There are also teachers and instructors who organize workshops for ceramics, hagiography, computing, foreign languages, folk dances and learning of musical instruments, among other things.

The focus remains largely to the aid and support of mothers who struggle from cases of abuse, abandonment and poverty. They are given the opportunity to place their children to the daily care of “The Ark of the World” and at the same time they can receive financial aid to pay their bills and rent.  The ultimate goal is to help them stand on their feet and be able to provide for their children in full. Since 2012, “The Ark of the World” has added more actions to its work of solidarity: a renovated three storey building in Piraeus has been operating as a guest house for unaccompanied children, a “social grocery” serves 200 families on a daily basis and during the last two years, “The Ark of the World” has been operating a centre at Pogoniani Ioanninon in the region of Epirus and another one in Chios island, including an agricultural school and a boarding school for the children. 150 children in total are sheltered in Athens, Piraeus, Epirus and Chios.

Ever since its establishment, “The Ark of the World” has received numerous awards and distinctions in Greece and abroad. This year, “Suberbrands” a prestigious international organization operating in Greece since 1995 which identifies on a yearly basis the country’s strongest brands, has selected “The Ark of the World” as a “Superbrand ” in the section Non Governmental Organizations, out of 68 candidates.

As once Father Antonios said: “volunteerism is a tangible action of love and therefore shouldn’t be awarded”. So the work of solidarity and love continues through his relentless efforts, combined with the work of volunteers and donors who support the mission of “The Ark of the World” in protecting, supporting and spreading love to children and mothers in need.