#greekdocs: Documentaries in times of crisis 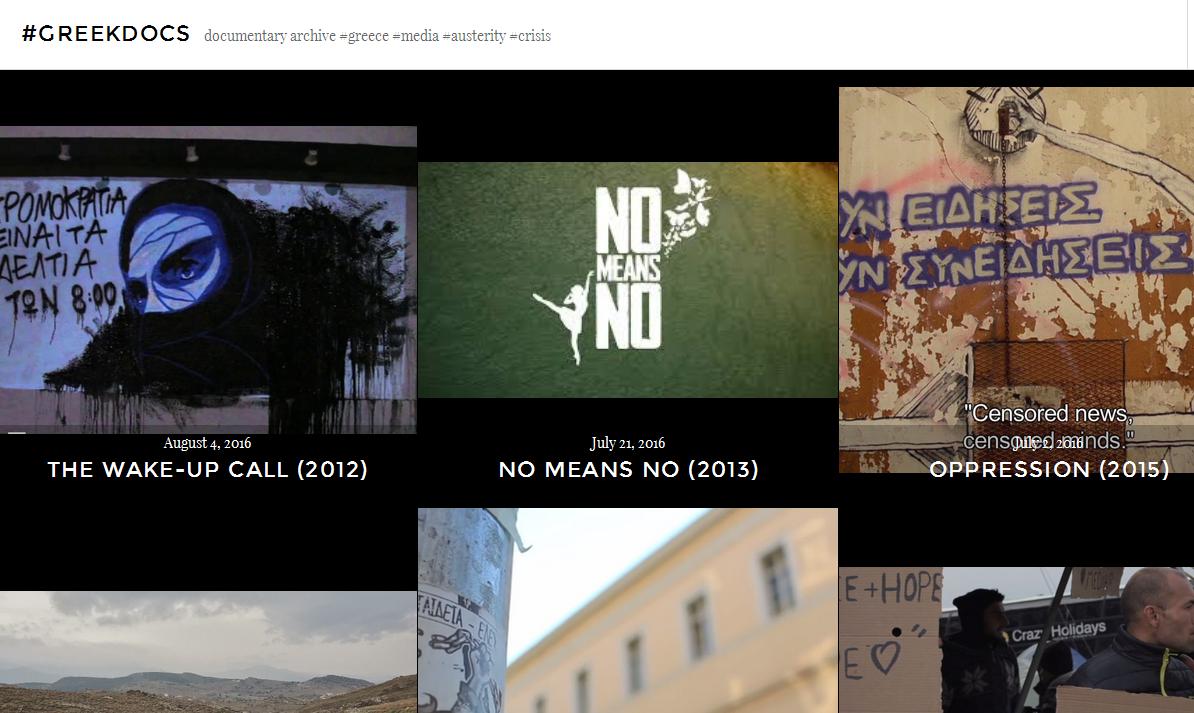 At a time when austerity policies have been worsening media production within Greece documentary production is blooming.  Since the signing of the first Economic Adjustment Programme in 2010, a growing number of independent documentaries have been produced and circulated online.

In a national landscape where mainstream media are engulfed in partisan and business relationships, and frame the crisis according to their interests, documentary has witnessed a significant growth, ranging from amateur film-making to independent investigative journalism. A range of citizens, journalists and other creatives have taken to reframing the crisis and the extent of everyday as well as systemic injustice. Independent media production in the context of austerity can allow for an exploration of documentary as a genre at the crossroads of journalistic and activist practice when trust in mainstream media institutions has significantly waned.

Based on a workshop on public culture, austerity and documentary in Greece (University of Sussex, 2014), dedicated to understanding some of the dimensions in the production and distribution of documentaries which chronicled the crisis, #greekdocs archive (created by Eleftheria Lekakis) was set up as a platform for the documentaries that had been identified. The idea behind the platform it is to enhance the information ecology and promote the visibility of such media in public culture, while more often than not there is a subtitled version of the documentary available. Also, it aims to counter national stereotypes by demystifying the social conditions of austerity through bottom-up media production. Out of 45 documentaries of various lengths currently in the archive, the majority (32) are available online for free, for streaming or downloading.

The documentaries in the digital archive range from works that address the crisis by examining the location of power at the transnational level (for example, Debtocracy, 2011; Catastroika, 2012; Citizend, 2015; This is a Coup, 2015; This is Not a Coup, 2016), by  exploring everyday life at the wake of the crisis (for example, Portraits of crisis, 2013; Greece: Days of Change, 2014; Anti-consumption in crisis, 2015), the rise of fascism (Into the Fire, 2013; Fascism, Inc., 2014; Golden Dawn: A Personal Affair, 2016), the refugee crisis (The Border, 2016; Island of Refuge, forthcoming). The topics are often interrelated; for example Ruins: Chronicle of an HIV witch-hunt (2013) interlaces a critique of the Greek media, politics and a society in crisis in its documentation of the vile treatment of HIV positive women. Similarly, Solitaire Ou Solidaire (2016) explores the case of the social clinic of solidarity in Thessaloniki which was created as a result of the hunger strike of 300 immigrant workers in 2011 highlighting solidarity at the intersection of healthcare, immigration and a social crisis.

Source: #greekdocs: an archive for documentaries about the crisis in Greece (openDemocracy, 21 June 2016)