The spectacular archaeological discovery of the so called “Griffin warrior” – who got his name from two items inside the tomb which depict a griffin - has once again made international headlines, following a facial reconstruction that was carried out recently by Lynne Schepartz and Tobias Houlton of Witwatersrand University in Johannesburg. The mysterious warrior – who was most probably a powerful man - appears to have had long black hair, a square jaw and powerful neck; at the time of his death, he must have been 30 to 35 years old.

The story goes back to 2015, when two University of Cincinnati scholars, Jack Davis and Sharon Stocker, renewed excavations at the ancient city of Pylos near the site of the “Palace of Nestor”, under the auspices of the American School of Classical Studies in Athens, with the permission of the Ministry of Culture in Greece. As a result, they discovered the grave of a Bronze Age warrior in southwestern Greece, filled with more than 1,400 objects: jewels, weapons and armor, as well as bronze, silver and gold vessels.

The gravesite is considered to be one of the richest to have been found in Greece in the last half-centuryfor the wealth of its find and its potential to shed light on a dramatic historical process: the extension of the Minoan culture of Crete to southern Greece, where it formed the basis of Mycenaean civilization, the first in mainland Europe. The Greek Ministry of Culture has characterized this finding the "most remarkable demonstration of prehistoric wealth in grave monuments found in the last 65 years in the country's mainland". 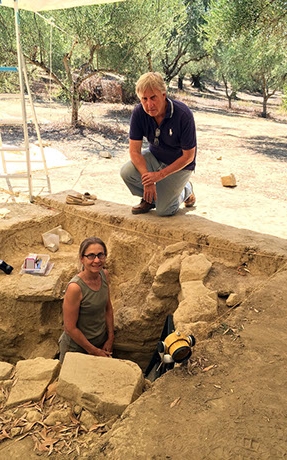 Greek News Agenda* spoke to Jack L. Davis** and Sharon Stocker*** who gave insight on the warrior’s identity and the find’s significance with regard to Minoan and Mycenaean civilizations. They also talked about their collaboration with the American School of Classical Studies in Athens and the Ministry of Culture in Greece, and shared their view on what archaeology really means for them.

Q: How much can you tell, with certainty, about the Griffin Warrior’s identity? And what does this archaeological discovery mean for the history of Minoan and Mycenaean civilizations as we know it?

A: The Griffin Warrior was likely a mainlander, given the number of purely “Mycenaean” artifacts that were buried with him, but he identified in some ways with Minoans and their religious iconography.  He died at a crucial time in the history of the mainland, when the Mycenaeans were forming their belief system, which, of course, eventually gave rise to Classical Greece and the birth of democracy.

Q: Are the excavations in Pylos to be continued? What comes next?

A: Yes, indeed.  We have already excavated for another season since we discovered the grave.  That season gave us the opportunity to learn much more about the date when the Warrior died and was buried.  We want now to learn more about the town in which the Warrior lived in the 15th c. B.C.

Q: Can you tell us a few things about your collaboration with the American School of Classical Studies in Athens, as well as with the Ministry of Culture in Greece?

A: According to Greek law, foreign archaeological projects operate under the auspices of a so-called “foreign school” in Athens.  We are no exception and formally excavate under the umbrella of the American School of Classical Studies at Athens, in Kolonaki.  Our project is sponsored by the University of Cincinnati and funded by various private donors as well as by our university.

We work very closely with the Greek Ministry of Culture, particularly the Directorate of Antiquities in Kalamata, which is responsible for Messenia, but also the central offices in Athens and the General Secretary of the Ministry.  Everyone has been extraordinarily supportive of our efforts.  We have an apartment in Pylos, where we spend much of the year, and Shari lives in Greece year-round.  Our presence “on the ground” facilitates collaborations of the sort that we recently reported in a paper in Athens at a conference at the Austrian School of Archaeology, where we assisted the Ministry in operations surrounding the construction of new facilities at Pylos, including a new roof over the Palace of Nestor.

Q: Every archaeologist dreams of uncovering a trove of historically significant objects. Is this discovery for you a dream becoming reality? And what is archaeology for you in essence - an art or a science?

A: It has certainly been exciting.  We have been actively involved in the archaeology of the Pylos area since the early 1990s and never in a million years anticipated finding anything like this.  Far from being a dream, it never even crossed our minds!  Now, however, we look on the discoveries as a marvelous opportunity to learn new things about the past.  So we view these discoveries as a challenge and responsibility that we hope we can meet.

Art or science? Certainly a science, particularly when one avails oneself of the full range of techniques available to archaeologists today: e.g., DNA analysis, C14 dating, chemical analyses of the composition of metals and soils.  Perhaps also an art, but only in the sense of the ancient Greek word “τέχνη”, i.e., craft.  But archaeology also requires perseverance, determination, dedication, and sometimes also simple pig-headedness.  A strong sense of purpose can lead good places, but you never know.  Lady Luck always plays a role.

**Jack L. Davis is Carl W. Blegen Professor of Greek Archaeology at the University of Cincinnati in Ohio and a senior associate member of the American School of Classical Studies at Athens where he had previously served as Director (2007-2012). He has directed several archaeological regional studies projects in Greece; on the island of Keos, in the Nemea Valley, and in the area of the Palace of Nestor in Messenia. He participated in the publication of excavations on Keos and on Melos and is an authority in the archaeology of the Aegean islands. Other research interests include the history and archaeology of Ottoman and early modern Greece and the history of Classical archaeology, in particular its relationship to nationalist movements in the Balkans. Currently, Professor Davis is directing regional studies and excavations in Albania, in the hinterlands of the ancient Greek colonies of Durrachium/Epidamnos and Apollonia, and is also engaged in a project to publish unpublished finds from Blegen's excavations at the Palace of Nestor. He is the author of several books; his most recent publication is titled “Philhellenism, Philanthropy, or Political Convenience” (American School of Classical Studies at Athens, 2013), co-edited with Natalia Vogeikoff-Brogan.

***Sharon Stocker is a professional archaeologist who has participated in excavations in Greece and Albania.  She directs the publications program for UC excavations at the Palace of Nestor in Greece.  She has served as co-director of archaeological surveys in the hinterlands of the Greek colonies of Epidamnus and Apollonia in Albania and of excavations at a recently discovered Greek sanctuary near Apollonia.  Since 2011, she has represented the University of Cincinnati at the Palace of Nestor in excavations conducted in collaboration with the Greek Ministry of Culture. She is a senior associate member of the American School of Classical Studies at Athens

Davis and Stocker lead the team that unearthed the undisturbed shaft tomb of the so called “Griffin Warrior”. They are currently giving a series of lectures in Greece and abroad about the excavation of this remarkable grave and discussing the Minoan-style gold rings found therein, which offer unparalleled insights into art and ritual at the dawn of Mycenaean civilization.

During the following weeks, their lectures will be presented in the following venues in the USA: a) J. Paul Getty Museum in Los Angeles (November 6, 2016): “Sometimes All That Glitters Is Gold”; b) the Penn Museum in Philadelphia (November 17, 2016): “A Prince of Pylos”; and c) the Institute of Fine Arts in New York (November 18, 2016): “From the Silent Earth”.