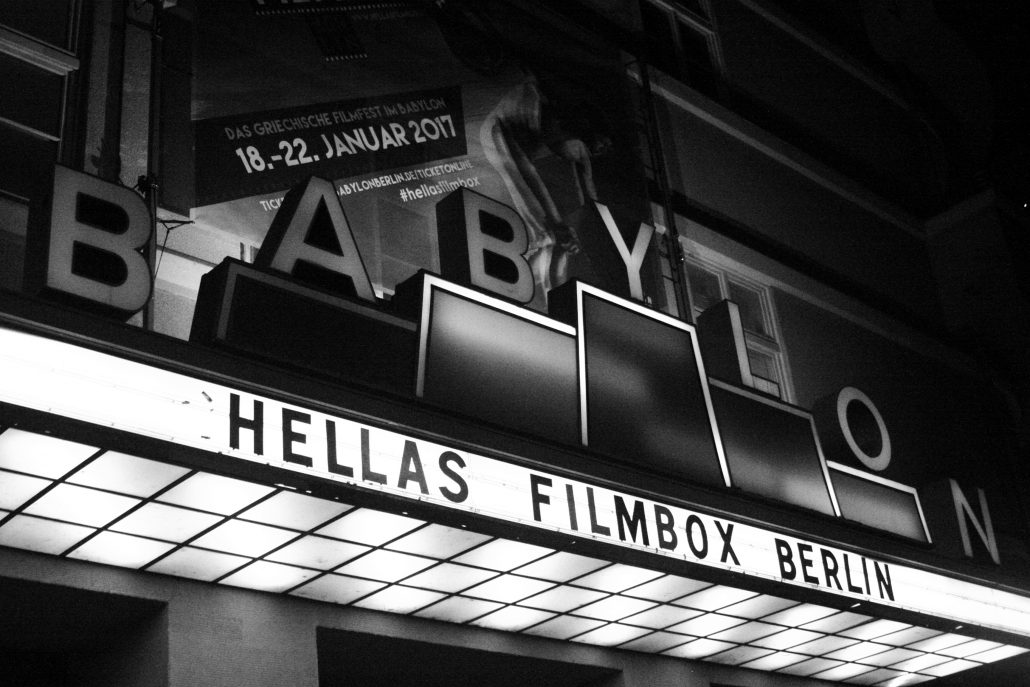 Among Greek film festivals outside Greece (Los Angeles, London, Dublin, Sydney etc), Hellas Filmbox Berlin Festival stands out for its ambition to use cinema as a means of intervention between Greek and German society by highlighting the current "emotional and political cracks" between them: “To see Greece through the eyes of its filmmakers should give the German and European audience a clear, direct and honest experience – one that is almost impossible to gain through the German media of the last five years. Greek films have far more to say about the crisis happening in Greece than daily German newspapers.”

Hellas Filmbox Berlin Festival second edition took place from 18 to 21 January 2017 at the historic Babylon Cinema building, with a rich program of films, special screenings and side events that concluded with an award ceremony January 22.

Greek News Agenda's sister edition Griechenland Aktuell, interviewed  the festival's founder, filmmaker and translator Asteris Koutoulas, while Greek News Agenda* interviewed Sofia Stavrianidou, Communications and Publicity Manager at the Filmbox Berlin on the aftermath of the Festival. Both Stavrianidou and Koutoulas emphasized that Filmbox Berlin as an institution tries hard to include in its programming a wide spectrum of themes and film categories so it is open to proposals from any creative team.

As founder of the Festival, established in Spring 2015 aiming at promoting Greek cinema and thus acquainting the German public with Greek filmography, Asteris Koutoulas told Griechenland Aktuell that his initiative was first and foremost an attempt to foster bilateral relations between Greece and Germany at a time (2010 - 2015) of significant tension between the two countries. Film is the most appropriate tool in maintaining and deepening the dialogue between film artists of both countries, he notes.

Asteris Koutoulas also referred to Costas Gavras as the guest of honor at the 2017 Festival edition, commenting that he represents values such as internationality, flexibility, dialogue, critical spirit etc with whom many film directors would like to work with. Koutoulas also referred to “New Vision”, an important part of the Festival, that includes unusual, innovative and experimental films [they’re neither movies nor documentaries] so that any new artistic view could be shown to an audience always eager to learn more about Greece and its current crisis through the eyes of its film directors and, if possible, to take another look at Greece (hit by an unprecedented financial and refugee crisis at the same time), and to shape a different opinion about the country beyond the one presented by the Media in recent years.

What is the outcome of the second Hellas Filmbox held this year? Has it been established in the cultural life of Berlin?

This is what we are hoping for. Within two years of its existence,Filmbox has managed to be one of Berlin's strongest film festivals in terms of capacity; and there are around 65 film festivals in this city. The feedback we are already receiving is very promising and people await the next edition. It is a festival made for the audience and we aim to create a yearly "habit" out of it, to motivate people to include Filmbox in their to-do list. This is how a cinematic event gains its position in the cultural sphere of Berlin, a city that offers multicultural events throughout the year.

As is mentioned on the festival site, Hellas Filmbox Berlin wishes to provide insight into Greece’s “current situation, its people, inner conflicts and secrets”. What was the reaction of the German public to this call to dialogue?

Yes, we wish to provide an insight into issues of concern to Greece and its people. I’d like to point out here that the reason we include foreign directors in our program is because we are very interested in their views on Greek issues, enriching the festival's international profile. This also allows for a more comprehensive interaction with the creators and the subjects. The German audience is alert and we notice that they have the curiosity to learn, to discuss, to exchange opinions. They stayed back after every screening for the discussion with the director, which we made sure lasted as long as possible. That was really exciting.

This year’s festival edition offered a variety of tributes (to women in Cinema, the LGBT community, Jewish History etc) and was rich in side events (a round table discussion on political cinema, the photo exhibition “Faces and Spaces”, a Master class in ancient drama and many others).

I believe that festivals should not be limited to film screenings. A festival presents something new to the audience in every feasible way. We are trying hard to include in our program a wide spectrum of themes in as many ways possible. LGBTQI, women creators need to be present and we wish to give them the opportunity to communicate through their work. We want to give this chance to every creative team, so we are open to proposals! Apart from this, exhibitions, panels, master classes, workshops are always part of our program, so as to provide the scope necessary to a festival.

What was the philosophy of the festival’s programming?

Well, the program follows quality criteria of course. But we also try to select films that the German audience would be interested in. The special screenings, the tributes, the opening and closing films are choices made with the aim to offer German audience a platform of easier communication with Greek matters.

What are the main traits of contemporary Greek cinema and how does a foreign audience respond to them?

A far as I can see, contemporary Greek cinema focuses on recent issues that affect the people and society, as well as having an impact on the world itself. The refugee crisis, for example, appears in their work in different angles. It is something you cannot avoid. It hurts, it is present, it is viral, and it is global. How can a creative eye ignore this?

Are there other film categories you would like to include in next year’s edition?

We would like to include everything. Our programmers and our director are on top of their field and I am confident in their efforts to provide works that shed light on every possible aspect of our country.