This April 21st marks the completion of 50 years since the imposition of the Colonels’ dictatorship in Greece. On April 21, 1967, in the small hours of the morning, army tanks roam the streets of Athens as a military coup led by Colonels Papadopoulos, Patakos and Makarezos breaks out.  The alleged reason: to save Greece from "communist danger". People from all political backgrounds are arrested and being brought to prisons or sent to islands of exile on the Aegean Sea. This is the beginning of a dictatorship that will last for seven years. Parliamentary rule, party pluralism, and public freedoms were replaced by censorship, police repression, arbitrary arrests, torture and fanatic propaganda of the nationalist and anti-communist type.

However, the coup was hardly unexpected. It was the culmination of a long period of political instability: the spirit of the Greek civil war, the only civil war to take place in post-war Europe, had persisted in the persecution of the Leftists, as the Greek Communist Party (ΚΚΕ) remained banned and those who were suspected for their political and democratic convictions were excluded from social, professional and political life.

On the occasion of the fifty years since that fateful morning of 1967, two conferences, held in Athens and Thessaloniki, seek to historically assess these seven years of dictatorship. Not a lot of historical time has passed between then and now, but renowned scientists, historians and researchers will endeavor to capture what happened during and after the junta in Greece and abroad.

The Contemporary Social History Archives (ASKI) in collaboration with the Institute of Historical Research of the National Hellenic Research Foundation, organize a three-day scientific conference entitled "Fifty Years After: New Approaches to the Dictatorship of the Colonels", taking place during April 20-22, at the National Research Foundation in Athens. You can view the abstracts of the announcements and CVs of the participants here (opens pdf file in Greek).

The conference covers a wide range of issues relating to both the seven-year period and the period thereafter, organized around the following themes: The dictatorship regime in the international environment; Greek-American relations; Political Powers, Church and Dictatorship; The regime: propaganda and repression; Public / technical works and policies; Economy and economic policy of the regime; History and Memory: Reconstructing the National Past; Challenging the regime: recruitment and attitudes; From the dictatorship to the Metapolitefsi (Transition): reflections and accounts; Dispute and artistic creation; Dispute, theater and intellect; Greeks abroad: in the constellation of the Resistance; The "moment" of the Metapolitefsi (transition to democracy). 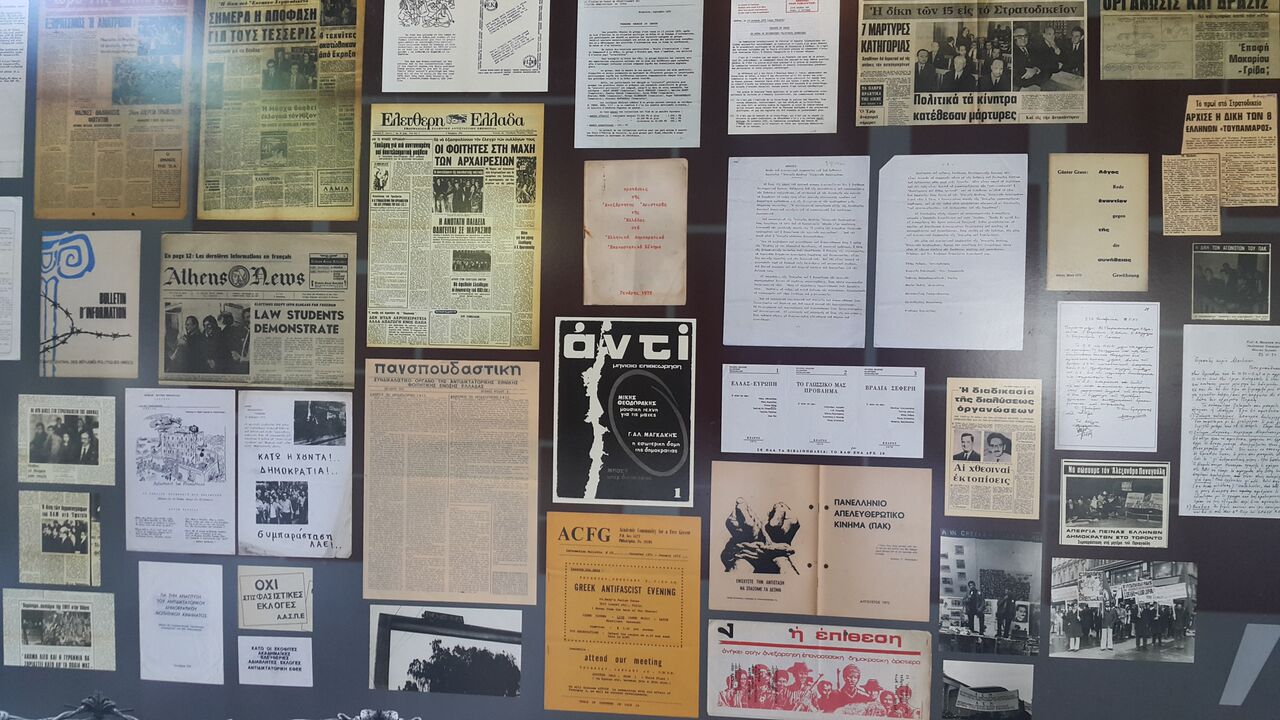 Of particular interest, from an international relations perspective were the announcements concerning international public opinion on the situation in Greece, as well as the political stance of countries like Germany and the US towards the regime:

According to Effie Pedaliu´s announcement, “Greek Dictatorhip and intenational public opinion”, the Greek Junta was notorious for its use of state torture as a means of control: in a an environment of global turmoil, where access to information was constantly increasing, these actions caught the attention of the international community and led to the emergence of a dynamic and international protest movement against the Colonels. However, even in the face of huge protest from international public opinion, most Western governments and organizations, such as the North Atlantic Treaty Organization (NATO) and the United Nations (UN), tolerated the undemocratic behavior and the human-rights abuses of the Colonels’ regime, since for them, Greece's geostrategic location was a higher priority.  The announcement also showcased the tactics and strategies used by the international anti-dictatorial movement, and highlighted how this movement, although it did not manage to bring down the dictatorship, had indeed an important impact on the development of International Law and of European policies of détente, i.e the easing of the geopolitical tensions between the Soviet Union and the West.

Chrysa Vachtsevanou’s announcement on “Greek-German relations during Colonels’ Dictatorship” informs us that overall, the German attitude toward the Junta in Greece was characterized by two constants: on the one hand, the need to maintain transnational agreements and safeguard the economic and geopolitical interests of Germany, and on the other hand, the clear condemnation of authoritarian regimes and the protection of human rights. The problem of combining these two constants into a single line of foreign policy became evident with the arrest of Professor George-Alexandros Magakis, which sparked a diplomatic episode between the two countries, resulting in the replacement of the German ambassador in Athens in 1972. The attitude of the German Chancellor Willy Brandt and the solidarity shown by the German people towards Greek immigrants and political exiles set the foundations for a new beginning in Greek-German relations after the Metapolitefsi (Transition).

Sotiris Rizas' announcement on “Democracy and authoritarianism in the American political thought of the 60s” demonstrated how the US policy of cooperation with the dictatorship was part and parcel of a broader understanding of American political thinking on the relationship between modernization, democracy and authoritarianism. At the beginning of the 60s, Walt Rostow’s approach prevailed: it favored democracy and the development of a modernizing middle class, suggesting a straightforward relationship between economic, social and political development. However, after a few years, Rostow's approach lost ground at the benefit of Samuel Huntington’s analysis that economic and social modernization did not necessarily lead to democratization and that the army, as a "modern" institution, could suppress mass mobilizations in countries with weak democratic legalization, thus managing the tensions that emerged from modernization. American analysts and advisors viewed Greece a part of this paradigm, and validated the choice to cooperate with the dictatorship within this context.

In Thessaloniki, the Greek Society of Art Historians and the Architecture Department of the Aristotle University of Thessaloniki, in collaboration with the Macedonian Museum of Contemporary Art, organize a conference entitled "Visual arts and architecture in the seventies 1967-1974: institutions, ideologies and inertia", taking place on Friday, April 28. For the first time in the framework of a scientific conference, the research of art historians and architecture concerning the activities of Greek artists and architects, as well as the overall evaluation of the role of the visual arts and architecture during the Junta period is presented. The thematic axises of the conference are: "Art Institutions", "Greek visual artists in Europe", "photography, sculpture" and "Architecture". The event will feature anti-dictatorial posters by Giorgos Argyrakis, which were released in Berlin during the period 1967-1974. 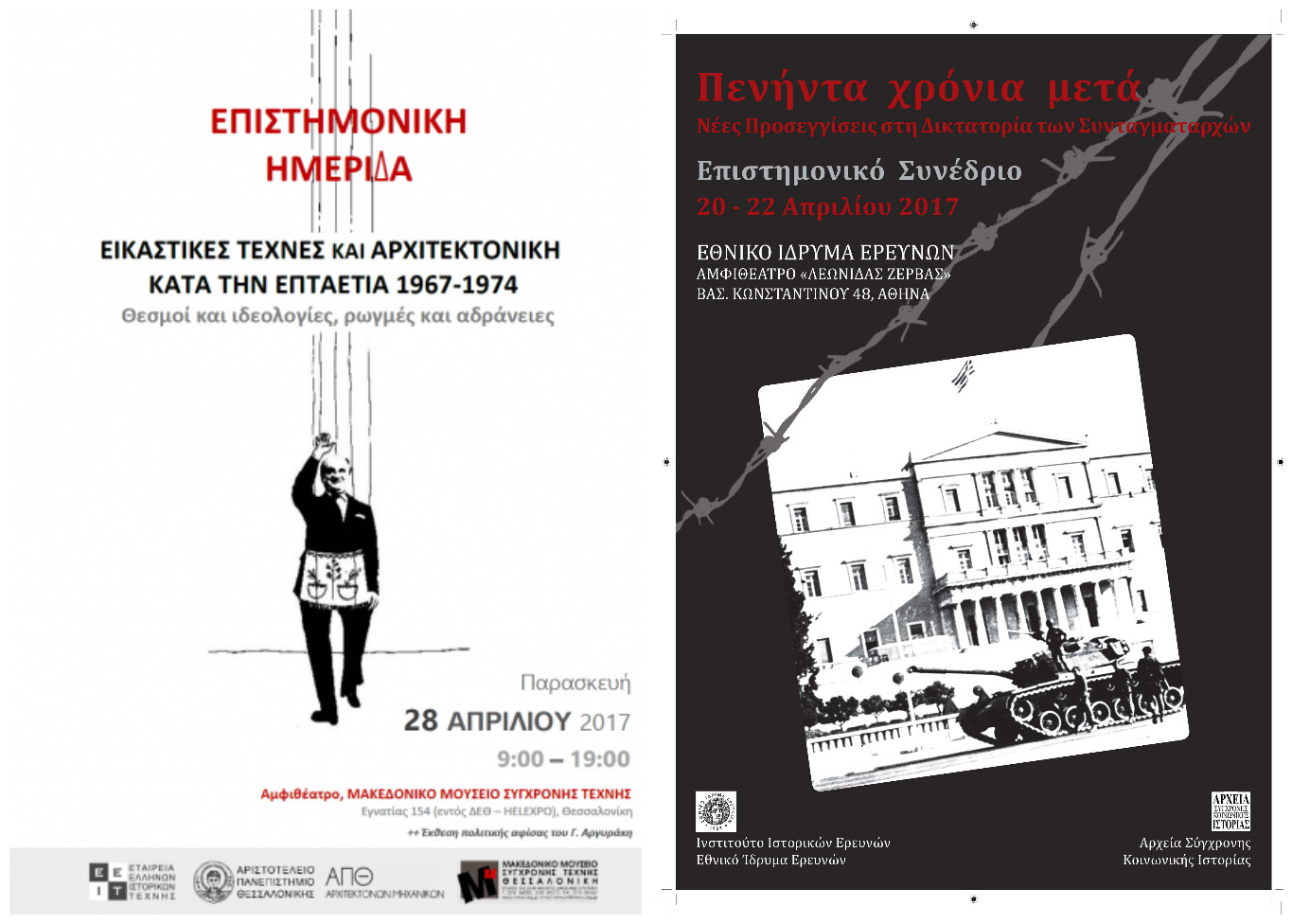