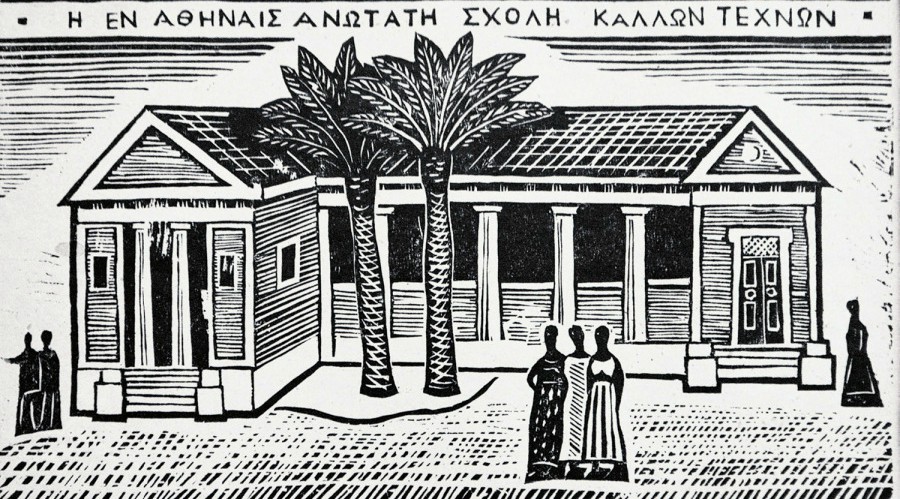 The history of the Athens School of Fine Arts coincides with the history of contemporary Greece. Just three years after the 180th anniversary of Athens as capital, ASFA celebrates 180 of cultivating young artists. Its transformations and evolution mirror the developments taking place in the Greek state, society and politics, but mark the transitions Modern Greece has gone through.

ASFA was established by royal decree as School of Arts, initially functioning as a Sunday school focusing on architecture, due to the needs of the newly founded Greek state. After the 1843 Revolution, which introduced the country into a period of constitutional monarchy, the school was separated into three divisions, including a five-year graduate school for Fine Arts. This was also the basis for the creation of the National Technical University of Athens.

At that time, teachers adhered to the strict imperatives of neoclassicism and, later, of the Munich School, which featured many renowned Greek representatives, such as Nikiforos Lytras, who was a painting teacher there for almost four decades, until 1904, and Georgios Jakobides, first director of the Fine Arts School when, in 1910, it became administratively independent, although still operating within the largest institution.

In 1930 it becomes a completely autonomous university, now officially named Athens School of Fine Arts. The first annexes, called “Artistic Stations”, are inaugurated. These are situated in several locations throughout Greece, and can be used by students and artists for educational purposes and events. This decade was characterised by the emergence of a new style of artistic expression in Greece, a quest for the true sense of “Greekness”, marking a revisiting of Greek tradition through the lens of modernist movements like Fauvism and Cubism. Painter Konstantinos Parthenis, one of the most prominent figures of the 30's movement, taught at the ASFA for many years.

Over the following decades, the organisation and curriculum would go through a number of changes and enhancements and several new courses would be introduced, from applied arts and photography to Philosophy and Aesthetics. Painter Yannis Moralis, one of the most influential Greek artists of his time, taught at the ASFA for thirty-five years. Other important teachers included painters Spyros Papaloukas and Yorgos Mavroidis and sculptors Yannis Pappas and Thanassis Apartis. 1991 sees the founding of the Department of Studies in Art Theory, which has functioned as a separate Department of Theory and History of Art since 2006.

In 1995-6, all educational activities are relocated to a new site, based on the grounds of a disused textile factory offered by the state a few years earlier, with an industrial background taking the place of the neoclassical settings. This change was actively pursued by Nikos Kessanlis, an innovative visual artist who served as dean at the time, and wanted to replace rigid academism with contemporary, revolutionary ideas and forms of artistic expression. Other artists who played a role in the shaping a new profile for ASFA include Panayiotis Tetsis, Elias Dekoulakos and Dimitris Mytaras.

Over the last two decades, postgraduate programmes have been introduced to the curriculum, including the interstate Masters Course “Art, Virtual Reality & Multi-User systems of Artistic Expression“, in collaboration with Paris 8 University. With firm roots, a rich history, but also an expanding programme introducing it to the digital era, the Athens School of Fine Arts faces the future with confidence.