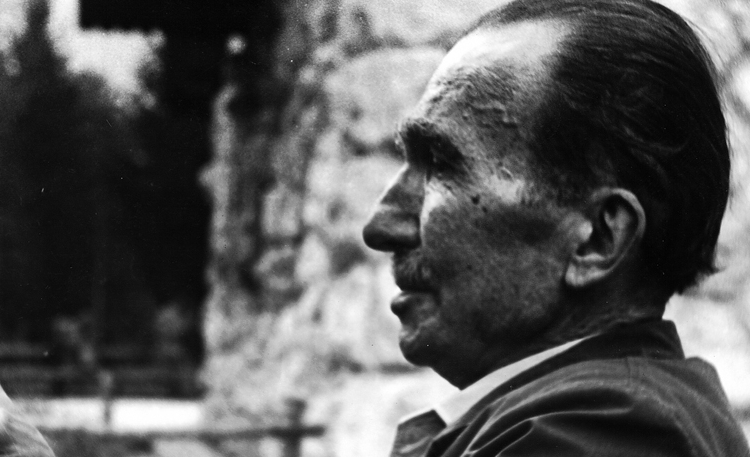 Nikos Kazantzakis (1883 - 1957) is one of Greece’s most well-known writers with an ecumenical character, as he is the most translated Modern Greek writer, who achieved to transcend the boundaries of his country and unfold a literary talent of universal range and resonance.

The Benaki Museum and Kazantzakis Publications, with the Kazantzakis Museum, the Historical Museum of Crete, the National Library of Greece and the Piraeus Bank Group Cultural Foundation as co-organisers, are organising a great tribute to Nikos Kazantzakis, as 2017 has been proclaimed “Nikos Kazantzakis year” by the Ministry of Culture and Sports. The tribute (18.12.2017 - 25.2.2018) bearing the general title “Nikos Kazantzakis, the Eternal World-roamer” includes three exhibitions which are presented in the Benaki Museum's Pireos Street Annex, the Nikos Hadjikyriakos-Ghika Gallery and the Museum of Islamic Art.

It is an homage to the great Cretan writer, a modern approach to his life and work, shedding light on known but also unknown aspects, through a rich audiovisual and archive material:

His “Ascent”: The exhibition presents known and unknown aspects of the life, work and travels of Nikos Kazantzakis, by highlighting important elements of his life. In particular, there is a biographical approach of his personality based on his works, through manuscripts, photographs and ample informative material, which is enriched by the multitude of his works translated in more than 50 languages, showcasing his ecumenical character. In parallel, there is a special mention in emblematic personalities (like Homer, Dante, Shakespeare, Bergson, Nietzsche and others) and a description of his travels (in Greece and around the globe), people and experiences that were important factors to the shaping of his character and his inspiration. The archive and photographic material is granted by the Kazantzakis Museum, the Historical Museum of Crete, the National Library of Greece, as well as by Kazantzakis Publications.

His “Orient”: The exhibition aims at depicting the contact of the Greek writer with the Oriental world, with the mystical atmosphere that accompanies it and the philosophical spirit that transpires it. Apart from his journeys to Egypt (where he meets C.P. Cavafy), Mount Sinai, China and Japan (as these are depicted in his travelling narratives), the exhibition also features for the first time the manuscripts of two fairytales he wrote (adaptations of the stories of the “Arabian Nights”) while it also detects the elements that connect the Cretan writer with the Oriental world theory. The archive and photographic material is granted by the Kazantzakis Museum and Kazantzakis Publications.

His “Odyssey”: The exhibition  refers to the “The Odyssey: A Modern Sequel”, the Kazantzakian epic poem, which is the sequel to the famous Homeric epic, featuring the drawings painted by Nikos Hadjikyriakos-Ghika for the English translation of the work of Nikos Kazantzakis from the Benaki Museum and the engravings of Christos Santamouris from the Piraeus Bank Group Cultural Foundation. A focal point of the exhibition is the original typed epic of the “Odyssey”, in a direct encounter with the artistic creations of the two artists. In parallel, the relevant correspondence of Kazantzakis and Hadjikyriakos-Ghika, included in the exhibition, reveals the framework of their co-operation regarding the venture of poetically illustrating the Kazantzakian “Odyssey”. The archive and photographic material is granted by the Kazantzakis Museum and Kazantzakis Publications.

Nikos Kazantzakis was born in Heraklion, Crete, when the island was still under Ottoman rule. He studied law in Athens (1902-06) before moving to Paris to pursue postgraduate studies in philosophy (1907-09) under Henri Bergson. It was at this time that he developed a strong interest in Nietzsche and seriously took to writing. After returning to Greece, he continued to travel extensively, often as a newspaper correspondent. He was appointed Director General of the Ministry of Social Welfare (1919) and Minister without Portfolio (1945), and served as a literary advisor to UNESCO (1946). Among other distinctions, he was president of the Hellenic Literary Society, received the International Peace Award in Vienna in 1956 and was nominated for the Nobel Prize in Literature.

The majority of Nikos Kazantzakis translations are into English, Spanish and German and French, yet it is also notable that almost all his major works exist in Chinese, Dutch, Finnish, Korean, Portuguese and Turkish and that several of his works have been translated into languages of more limited diffusion, such as Armenian, Estonian and Icelandic.

Kazantzakis regarded himself as a poet and in 1938 completed his magnum opus, The Odyssey: A Modern Sequel. Kazantzakis is known outside Greece mainly for his novels (The Life and Adventures of Alexis Zorbas, Christ Recrucified, The Fratricides, Freedom and Death [Captain Michalis], The Last Temptation and God’s Pauper), but he also wrote poetry, tragedies, philosophical and autobiographical works, travel books and essays.

In 1953 the Church of Greece sought Kazantzakis’ prosecution on account of certain excerpts in Freedom and Death and The Last Temptation, before the latter was even published in Greece. The following year, the Pope placed The Last Temptation on the Catholic Index of Forbidden Books. Numerous intellectuals and organisations defended the author, who telegraphed the Vatican with Tertullian’s phrase “I lodge my appeal at your tribunal, Lord”. The Ecumenical Patriarchate finally laid rumours and appeals regarding the excommunication of Kazantzakis to rest, claiming that the matter lay within the jurisdiction of the Church of Crete.

Though in Greece Kazantzakis did not succeed in being elected to the Academy of Athens, his fame abroad spread rapidly during the last decade of his life. More and more translations of his works into European and other languages appeared; his plays were broadcast on European radio stations and performed in European theatres; in 1954 Zorba the Greek won the best foreign-language novel prize in France while W. B. Stanford dedicated a chapter of his book on the Ulysses theme to Kazantzakis’ Odyssey.

Kazantzakis’ international recognition was secured after 1964 with the success of Michael Cacoyiannis’s film “Zorba the Greek”, which, together, with the other two film versions of his works, Jules Dassin’s He Who Must Die [Christ Recrucified] (1957) and, later, Martin Scorsese’s The Last Temptation of Christ (1988), undoubtedly helped to promote Kazantzakis’ work.