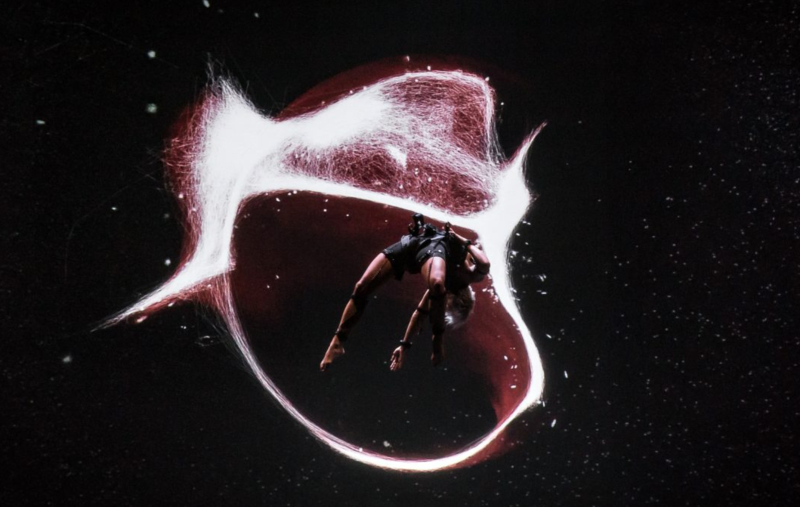 Athens Digital Arts Festival (ADAF) comes back for its 14th edition on May 24-27, 2018 at the “Megaron” Athens Concert Hall. Once more, visitors will have the opportunity to come in contact, experience and interact with the works of creators and performers from around the world who combine art, science and technology. This year, the festival’s theme inspires artists to try and get an insight into the future, and assess the imminence of a technological apocalypse.

Over the past years, ADAF has always been devoted to the support of innovative artistic expression, establishing strong bonds with local and international artists and audiences, institutions, art foundations, schools, universities, galleries and museums and a number of 51 collaborating international festivals. For its latest edition, the festival features more than 200 different artistic creations, films, installations and performances.

The theme for 2018 is “SINGULARITY NOW”: Singularity is a notion with varying definitions in different scientific fields. In mathematics, it is the point where a function or an equation degenerates or diverges toward infinity, changing its nature and thus becoming impossible to define. In physics, it is the core of a black hole as well as the state right before the Big Bang, the zero point of space and time where everything is compressed in zero dimensions and density is infinite. In mechanics, it is the calibration of a machine in a way that its behaviour cannot be predicted and the physical variants involved are either not definite or infinite. In technology, it is a scenario where artificial intelligence surpasses humanity, the technological boom becomes infinite and the outcome is unpredictable.

Singularity as a notion is associated with infinity, with the unknown, and the beginning of universes, both physical and conceptual – Athens Digital Arts Festival 2018 is now linking this concept to art. The organisers are inspired by the myth of Prometheus, the Titan who offered fire as a tool to the humankind, perceiving this gesture as an instance of singularity. Thousands of years later, technology, which developed thanks to the gift of fire, has evolved to the point of slowly taking over the reins from its creator, paving the way for an upcoming technological singularity, which can potentially get any form. 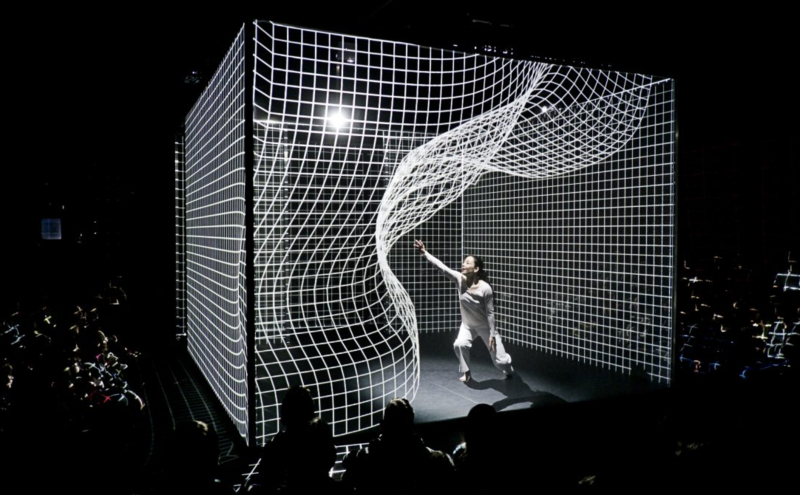 The constant progress on robotics, AI, biotechnology, biomimicry, nanotechnology, quantum computing and space technology, is courting with the idea of surpassing humankind – humanity seems to have entered an “event horizon” where no one can predict what will follow. Faced with this new reality, the ADAF team extended an open call to representatives from both the art world and the world of technology, to submit works which outline, comment, predict or determine the upcoming singularity, the human role in this new era and the role and form of art and technology in it.

Athens Digital Arts Festival 2018 features a rich programme by multiple participants from the international scene. Here are only a few of the various interesting performances you shouldn’t miss:

Arabesque is a kinetic art work, inspired by Mary Shelley’s Frankenstein and the alchemist’s laboratory. Composed of life-sized cast human body parts, translucent entities expose their internal robotic mechanisms to the world. When in motion, “Arabesque” becomes a time-based performance and can be viewed from a multitude of angles, revealing a kaleidoscope of beautiful patterns created from the human form. 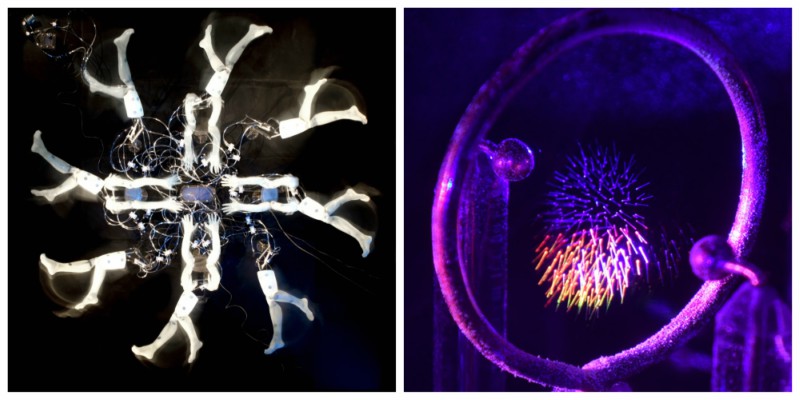 Based on a ring-shaped Paul trap, Ion Hole probes the subtle interactions between coherent light, electromagnetically suspended matter, and nearly negligible gravitational forces. Inside the trap are ionised lycopodium spores that repel one another while being simultaneously pushed towards the center of the trap by alternating electric fields. Consequently, the spores assemble into an oscillating latticework known as a Coulomb crystal. By means of laser illumination, a large-scale projection is created, magnifying the spores’ ceaseless orbital dynamics.

Dökk (‘darkness’ in Icelandic) is a live-media performance about a journey through a sequence of digital landscapes, where the perception of space and time is altered. In order to represent the interdependence between the performer and her surrounding, a system has been created which processes real-time data from biometric and movement sensors as well as data coming from social networks. These, together with the performer’s biometric data, make the performance different every time it is staged. 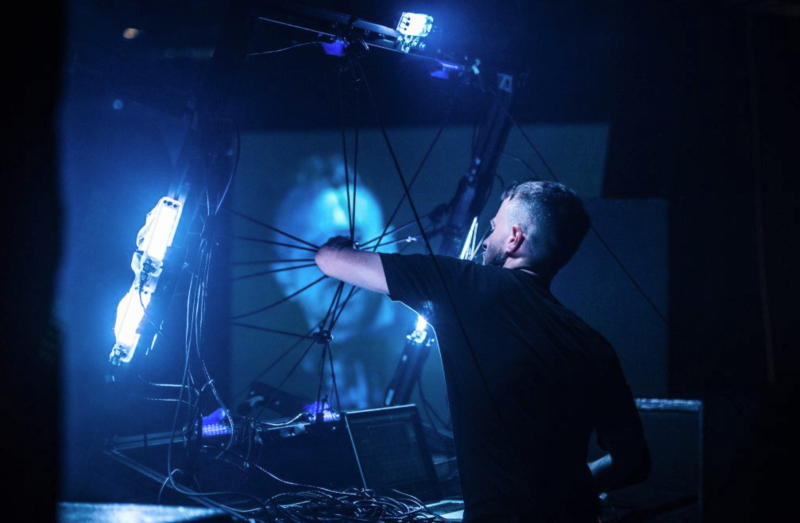 Interference (String Network) is an audiovisual performance that explores the possibilities of embodiment of an electroacoustic work in real time through gestural interaction with a unique audiovisual device. On stage, an audioreactive play of light unfolds gradually: the artist builds a network of strings with which he interacts to create a sound universe between industrial noise, electronica and acousmatic music. Through the staging of corporality and the dialectic relationship between the human and the machine, Interférences presents an allegory of the globalised and interconnected modern world in which the individual seeks to derive meaning from his experience and attempts to preserve its freedom of action.

Hakanaï is a solo choreographic performance that unfolds through a series of images in motion. In Japanese, Hakanaï denotes that which is fragile, evanescent and transient, and in this case something set between dreams and reality. While widely associated with nature, the term is now often used to elicit an intangible aspect of the human condition and its precariousness. The dancer brings life to a space somewhere between the borders of imagination and reality, through her interactions with the images she encounters. The images are on-stage animations that move in physical patterns according to the rhythm of live sounds. The performance’s outcome is the revelation of a digital installation to its audience. 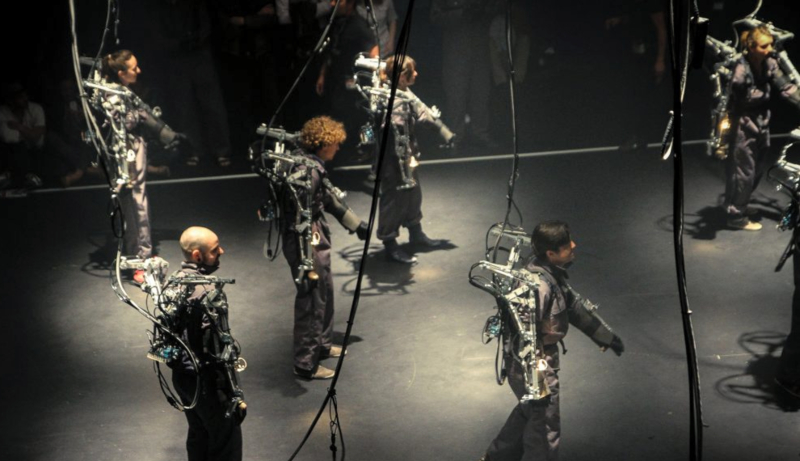 Inferno is a robotic performance project inspired by the representation of the different levels of hell as they are described in Dante’s Inferno or Haw Par Villa’s Ten Courts of Hell, and other religious representations. What distinguishes this performance is its participative nature: the various machines involved in the show are installed on the viewers’ bodies. Some mechanical elements coerce the viewers in performing certain movements, others induce a physical reaction from them. The unification of man and machine is, in a certain way, an expression of the punishment for the technological sins committed for the sake of progress.

As part of its 14th edition, ADAF presents a mini programme for kids which includes animation, installations and Virtual Reality. Kids will have the opportunity get their portrait done by robots, to travel to digital realms and experience the magic world of animation! The animation screenings will take place on Sunday, 27 May 2018, at 12:00-13:00 and 16:00-17:30. In between the two screenings, kids and their parents will be able to make a guided tour at ADAF 2018.