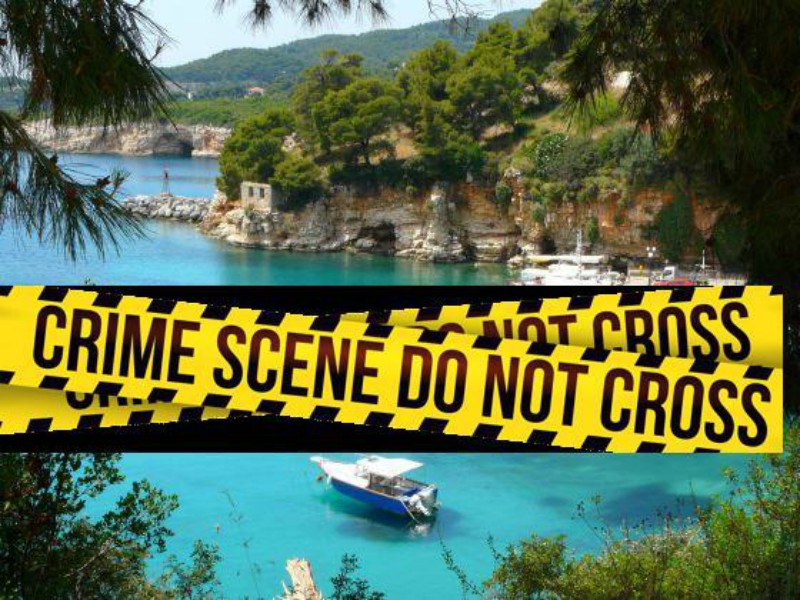 If you are still looking for the book that will accompany you to your Greek holidays, Greek News Agenda is proposing six mystery novels that will inspire you to discover three Athenian neighborhoods and will guide you to another three breathtaking holiday destinations.

Follow the “patriarch” of the Greek crime literature and descover the secrets of the Athenian high society. Yannis Maris is the author who established the crime novel genre in Greece in the ‘50s. His main character, Commissar Békas is depicted as an everyday man who nevertheless is not afraid to defy the rich and powerful in order to solve a case. The Commissar Békas series can be also read as an historical guide to the Athenian life during the ‘50s and ‘60s. Dangerous Spring is set in 1965. The story begins when Professor Andreas Lambrinos, one of the leading lawyers in the country and a prominent public figure, risks knocking down with his car Olga Kazàsoglou, the offspring of a wealthy Greek shipowner of the diaspora. The novel takes you to the upscale Athenian suburb of Kifissia and to its aristocratic mansions.

Take the metro line 1 from the center of Athens and in about 30 minutes you will land in a different world. In the late 19th and early 20th century, wealthy Athenians chose the leafy suburb of Kifissia to escape the heat of down town Athens. Their mansions define the character of the suburb to this day. Kifissia is known for its luxury boutiques, its posh brunch restaurants and its all time classic spring flower show.

If Yannis Maris guides you to the glamorous neighborhoods of Athens, Petros Markaris’ inspector Haritos will drive you in heavy traffic  and will show you the dark side of the city. The stories of this internationally acclaimed representative of the Mediterranean Noir, are a compelling portrayal of Athens and Greek society. The author draws inspiration from actual social problems: racism, corruption, terrorism and the economic crisis are some of his books' subjects that make the case for the social dimension of detective literature. The millitarty dictatorship of 1967-1974 often serves as background to the stories. His novels have been translated in more than twenty languages. Costas Haritos is not the typical idealized crime-fighting hero. In his fifties, he is leading a petit-bourgeois life, he lives in Pagrati, he has an obsession with dictionaries and he is touchingly attached to his 30-year-old Fiat Mirafiori in which he drives around Athens. In Zone Defense, Haritos, in his hunt for the killers, delves into the worlds of organized crime, football, and even opinion polling.

Pagrati has always been a residential down town neighborhood with a cosy atmosphere. During the last few years, it has acquired new prestige. Still cosy but "cooler", it has witnessed the opening of new urban style bars and neo-tavernas that are attracting the city’s alternative youth. When in Pagrati, dare to go jogging in the Panathenaic Stadium, take a leisurely walk through the Pagrati Woods and visit the 1st Cemetery of Athens. The cementery is declared an historical monument and includes several impressive tombs such as those of Heinrich Schliemann, designed by Ernst Ziller  and one tomb with a famous sculpture of a young girl calledI Koimomeni (The Sleeping Girl) sculpted by Yannoulis Chalepas.

Sergios Gakas has been working as a theatre director in Greece since 1979. He is the president of the ELSAL (the Greek Club of Crime Writers). Ashes is his first novel to be translated into English. In Ashes the scene is set in winter 2004, just before the Athens Olympic Games. From his office in Syngrou Avenue, police colonel Chronis Halkidis is trying to solve an arson case with four casualties. Soon the case turns personal and old wounds come into the surface. Halkidis is an anti-hero: a chain-smoker with an addiction to cocaine. The book is pure noir, a fierce battle between justice and reality: alcohol, drugs, cursed love affairs and corruption against the background of a morally bankrupt society.

Once mostly known for its strip-clubs, the busy Syngrou Avenue is now hosting some of the country’s most important cultural institutions. After many years, the National Museum of Contemporary Art found its permanent home where the Fix brewery once stood. Walk a bit further down the road and you will reach the Onassis Cultural Centre, a cultural space which hosts events and actions across the whole spectrum of the arts from theatre, dance, music, cinema and the visual arts to digital and hybrid art and the written word. In 387 Syngrou Avenue, you will find the Planetarium and almost across the street, the new pride of the Athenian cultural and architectural landscape, the ​Stavros Niarchos Foundation Cultural Center, home to the National Library and the National Opera. The big park surrounding the buildings, designed by Renzo Piano, is open to the public and hosts outdoor festivals. Syngrou Avenue is also the gate to the Athens Riviera, where you can take a break from the hustle and the bustle of the city and enjoy the beautiful marinas, recreation parks, playgrounds, shopping centers and restaurants. 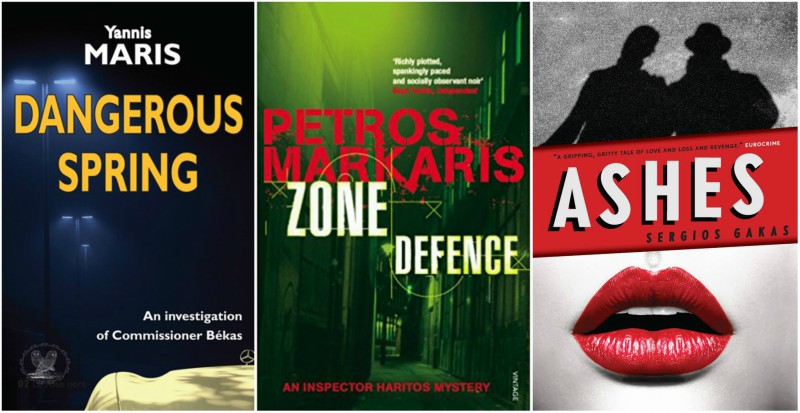 While most of the stories written by Greek authors and translated into English are based in Athens, the British and American writers choose to set their stories against less urban landscapes, clouding the serene countryside and islands with mystery.

In Mani with Alex Mavros:  The Last Red Death  by  Paul Johnston

The book is the second installment of the Alex Mavros novels. Paul Johnston’s hero, private investigator Mavros, travels all over Greece, finding himself in matters of political, historical, and personal intrigue. Johnston studied ancient and modern Greek at the University of Oxford and lived many years in Greece. His knowledge of the country adds another layer to the Mavros novels. The Last Red Death revolves around the subject of home-grown terrorism. Inspired by the acts and subsequent arrest of the November 17 terrorist organization, Johnston tries to examine the feelings of both perpetrators and the victims' families as well as the historical circumstances that lead to terrorism. The setting of this novel is Mani with its tiny churches and blasted mountainsides. Mavros also spends time in Argolidha, the area containing Mycenae and Tiryns, as well as the beautiful modern town of Nafplion, with its Venetian fortifications and domed former mosques. The action takes place in winter subverting the standard tourist idea of Greece as a place where the sun constantly shines.

Beside the stunning beaches, some of the most popular attractions this southernmost part of continental Greece has to offer are: the Diros Caves. Abandoned as human habitation in 4 BC after an earthquake, the caves weren't rediscovered until around 1895. The visitor can admire the network of dramatically lit caves dripping with stalactites. Deeply rooted in Mani’s architectural culture are the tower houses. As well as serving an obvious military purpose, the towers were an outward sign of clan strength and unity.

In Mykonos with Andreas Kaldis: Murder in Mykonos by  Jeffrey Siger

Another writer with a series of Greece-based mystery novels is Jeff Siger. The books’ main character is former Athens detective, Andreas Kaldis. Murder in Mykonos has been awarded the New York Times 2012 “Pick for the Beach”. The story opens when a female tourist is discovered on a pile of bones under the floor of a remote mountain church. Kaldis tries to find the killer before the media can destroy the island's fabled reputation. The author has said about the book: "I wanted to write a story that would allow me to describe in detail the way I see Mykonos, the real beauty, the beauty of its people and of the way of life here.  Since writing about flowers, pelicans and picturesque tavernas was not exactly my style, I thought that the best way to awaken the interest of the reader was through the intrigue of a murder mystery".

Greece's most famous cosmopolitan island, Mykonos is a whitewashed paradise in the heart of the Cyclades. Pay a visit to the church of Panayia Paraportiani, the Town hall and the castle situated above the harbour. One of the most scenic corners of the island is Alefkántra or “Little Venice”, an 18th century district, dominated by grand captains’ mansions with colorful balconies. Don’t miss the opportunity to treat yourself to some local Aegean specialties: Pepper flavored kopanistí, a soft cheese seasoned with pepper, “loúzes” (cooked pork filet with spices), tasty local sausages sprinkled with pepper, and local oregano that has been caressed by the sun and dried in the north wind.

In the latest entry of the 8-book Hermes Diaktoros series, Anne Zouroudi guides us to the fictitious island of Liteos, inspired by Alonnisos, one of the Sporades islands to the east of mainland Greece. Hermes Diaktoros is the Greek version of Hercule Poirot. Eccentric, overweight and never to be seen without his pristine white tennis shoes. The Gifts of Poseidon is a hymn to Greece, to its beauty, its people and its food.

An island full of pine forests, olive groves and orchards, Alonnisos is host to the National Marine Park of Northern Sporades, a refuge for rare seabirds, dolphins and the Mediterranean monk seal, monachus monachus. Alonnisos is the perfect destination for nature, diving and adventure tourism. 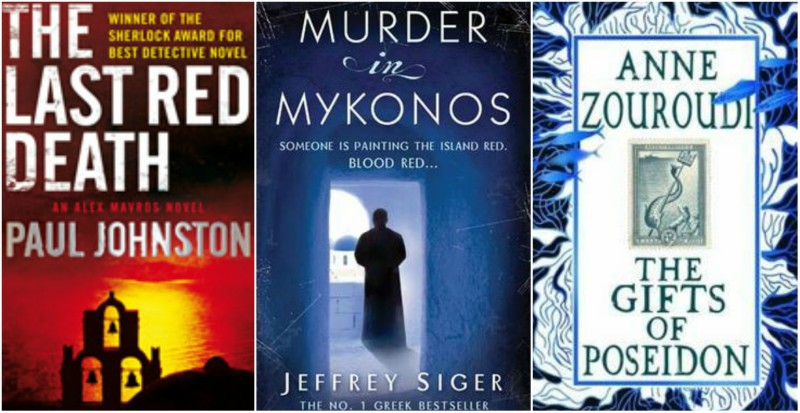