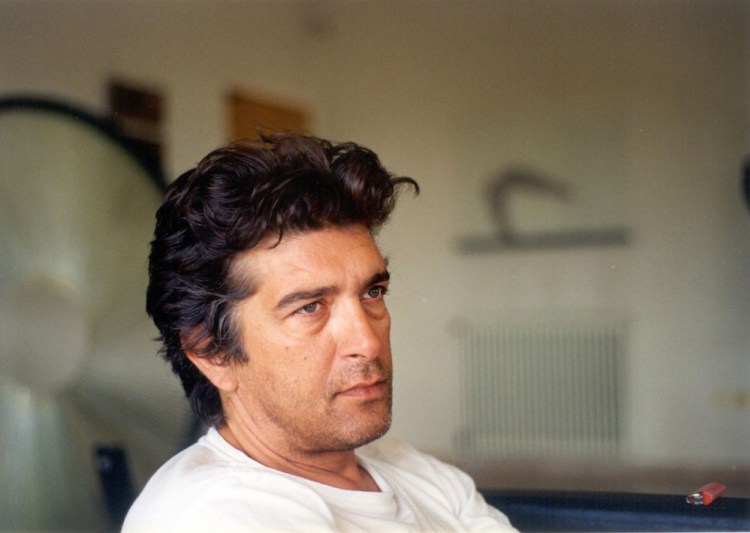 Greek sculptor Costas Varotsos has left his artistic stamp on urban spaces across the world, his sculptures adorning many public places in Greece, Cyprus, Italy, Switzerland and the United States of America. As an established sculptor, Varotsos is heralded for his masterful skill in working with stone, iron and the fragility of glass. His huge glass sculpture “the Runner” opposite the Hilton Hotel in Athens, has become a modern icon of the city, masterfully suspended in motion.

The B&M Theocharakis Foundation presents Varotsos’ latest body of work, in the exhibition “Costas Varotsos: Sculpture 2008-2018”. President of the Republic Prokopios Pavlopoulos inaugurated the exhibition, paying tribute to the works of Varotsos that “highlight the plight of refugees and migrants drowning daily in our seas, a broken-up Europe that watches its unification slip away, and a society losing its sense of solidarity”. Curator Takis Mavrotas writes in the exposition’s catalogue: “with his work, Varostos gives a three-dimensional form to the essential, to a poetic sculptural world. Simplicity, austerity and a sense of time dominate in his work, reaching out to the earth, the sky and the sea.” The show will run until October 21 at B&M Theocharakis Foundation (Vasilissis Sofias & Merlin 1). 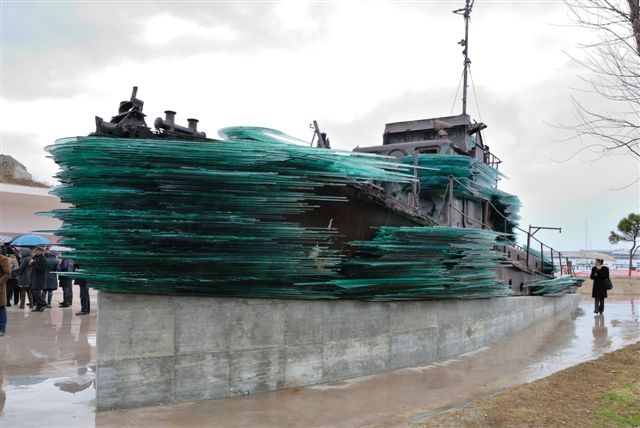 "Arrival", Italy, 2012: The sculptor transformed a wrecked ship in which 81 Albanian immigrants drowned in a work of art.

Costas Varotsos was born on 25 January 1955 in Athens. He studied painting at Rome’s Academia di Belle Arti (1973-1976) and architecture at the Arte Scuola di Architettura in Pescara, where he attended lessons by Giorgio Grassi. Even from his first works in Italy - mainly performances and sculptural interventions - Varotsos starts to express an interest in space. In 1982, after ten years of living in Italy, he abandons his degree in architecture and returns to Greece where he realises his first solo exhibition at the Desmos gallery, entitled "Spacial Intervention in Nature: Deterioration".

In 1983, at the instigation of the collector Dakis Ioannou, Varotsos made his first public work titled "The Poet", which was displayed in Nicosia, Cyprus. From then on, Varotos focuses exclusively on sculpture. He uses transparent materials, such as glass, plexiglass and water, but also steel or stone in order to create works with a social and symbolic character. He is especially interested in the communicational and emotional impact of the work on the viewer.

Gradually his interest turns towards works and syntheses for public spaces via which he attempts to explore the human relationship between the natural and man-made environment. Within this framework, in 1988 he creates the famous “Dromeas,” aka The Runner, a 14-meters-tall, 17-tons-heavy sculpture of glass stacked on iron, commissioned by the City of Athens. From 1988 to 1994, the Runner was displayed in Omonoia Square before concerns about vibrations from the metro beneath it encouraged city officials to move it to its present site, in front of the Hilton Athens on Vassilissis Sofias Avenue.

The sculpture, a bold visual intervention, placed in a city that at the time was not very accustomed to modern art, would not go unnoticed.  Its original name was “Xenos” (Stranger), but “Dromeas” prevailed, due to the dynamic form of the sculpture. Its monumental dimensions and the unusual materials with which it was made, marked the urban landscape, causing heated debates.  It was first time that a work of modern art in Greece divided public opinion so intensely, gaining fanatical supporters and as well as sworn enemies. Now however, it is widely accepted as one the city’s landmarks. 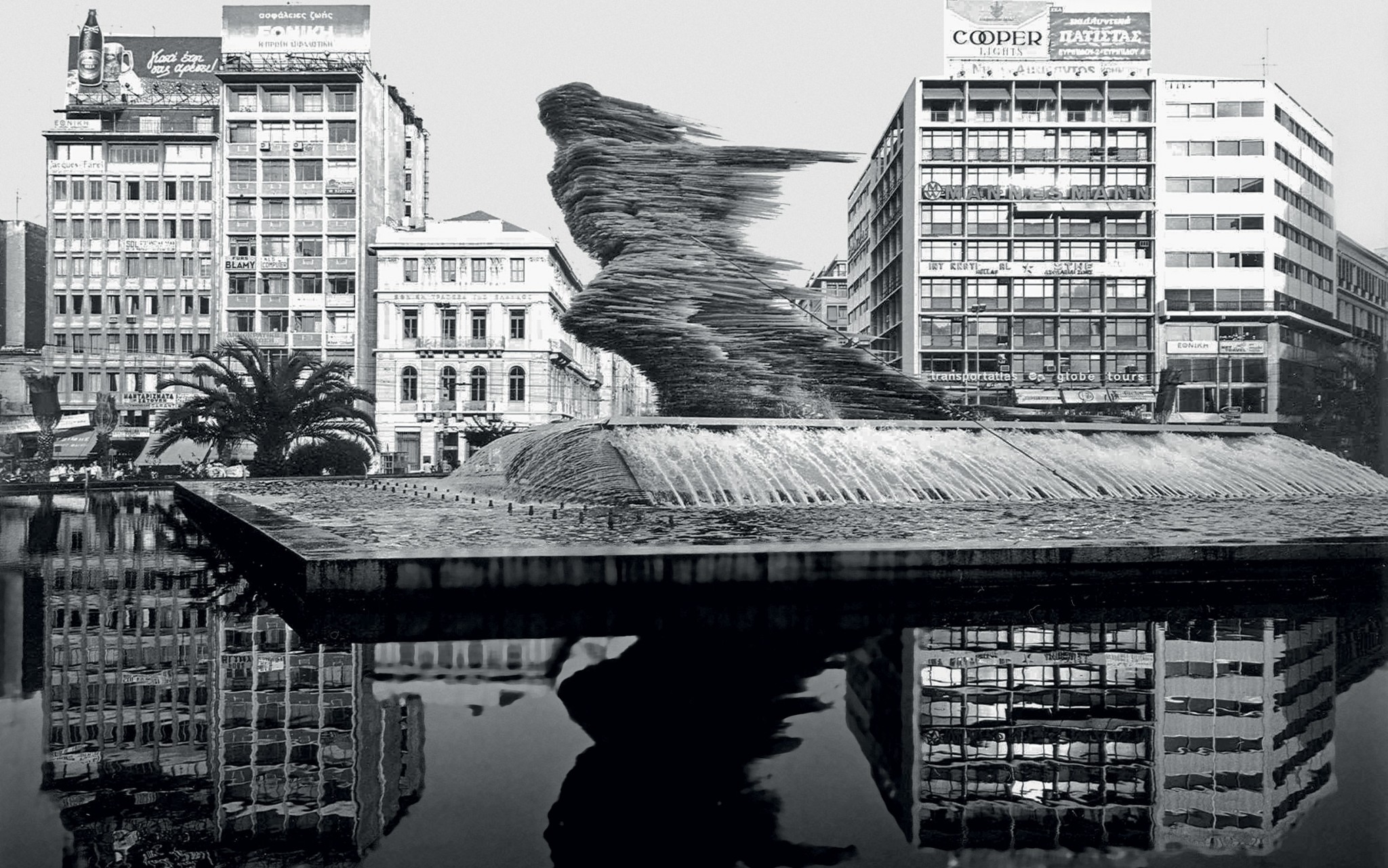 "The Runner" (O Δρομέας), Athens, 1988: The sculpture at its original site, Omonoia Square

In 1989, Varostos becomes a founding member of the artists’ group Realismi. In 1991 professor and art theoretician Achille Bonito Oliva organizes the artistic group Transavanguardia Freda, in which Varotsos also participates. In the same year Varotsos is awarded with a Fullbright Scholarship and moves to New York for a year. In 1999 he is elected Professor at the Architectural School of the Aristotle University of Thessaloniki; for the Venice Biennale of that year, Greece selected him as their sole representative, his work filling Greece’s entire pavilion. In 2003 he took part in the Beijing Bienniale.

As Andy Brumer writes, “Varotsos works primarily in glass and steel, materials which he transforms into works of art that radiate with spiritualized music and cosmic poetry. Working both indoors and out, Varotsos’ sculptures interact with and explore the specific sites they occupy. [...] 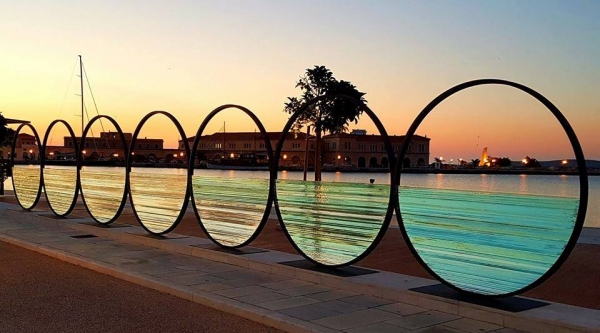 In the piece "Horizon", installed at the warterfront of Syros, the glass rises to the center points of the concentrically positioned row of rings, creating a virtual horizon in itself as well as a visual reference point directing the viewer’s gaze over the water toward the actual horizon line of sea and sky. The glass, with its natural imperfections, sparkles as it catches the light like the blue of the Aegean sea itself, elevating the work into both a metaphor (for the symmetry and freshness of the natural world) and a lyrical celebration of the artist's materials in and of themselves.”