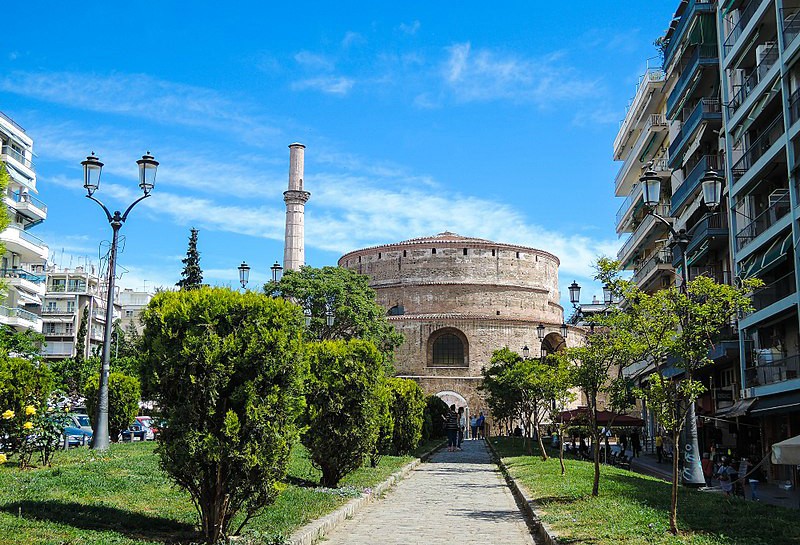 Thessaloniki is a poison for which there is no antidote. For me it is a life sentence of ambivalence between attraction and repulsion. A mystical force keeps me prisoner and -as though I am under its spell- I will never abandon it […]

Thomas Korovinis is an author and songwriter. He has published 30 books. He is also a composer, lyricist and singer. Many of his literary works have been adapted for the stage. His novel O Gyros tou Thanatou [Wall of Death] was awarded the State Literary Award for Best Novel (2011) and his novel ‘55 won Diavazo magazine’s “Nikos Themelis” Award (2013). In 1995 he was awarded the Abdi İpekçi Peace and Friendship Prize. We thank him for allowing us to publish his essay which has appeared in the Winter 2018-19 issue of GREC14N / THE NORTH EDITION / SKG magazine (pp. 46-50).

Thessaloniki has gone through the centuries with one foot in the East and one in the West. She fit these two elements together and bound them through her historical course. Threats by various enemies, successive refugee waves, persecution and enslavement of its Greek population have been the staples of her existence throughout the centuries. The multinational character of the peoples who have cohabited in the city imbued it with a cosmopolitan air with Balkan and northern Mediterranean notes.

The 1922 wave of refugees of the Population exchanges enriched the city with the elite of Asia Minor and Thracian Romioi; their traditions added a more vernacular sevdali - amorous color. Older inhabitants had the chance to taste a little of the intercultural harman - blend that built the city’s bourgeois lifestyle and folk myths. 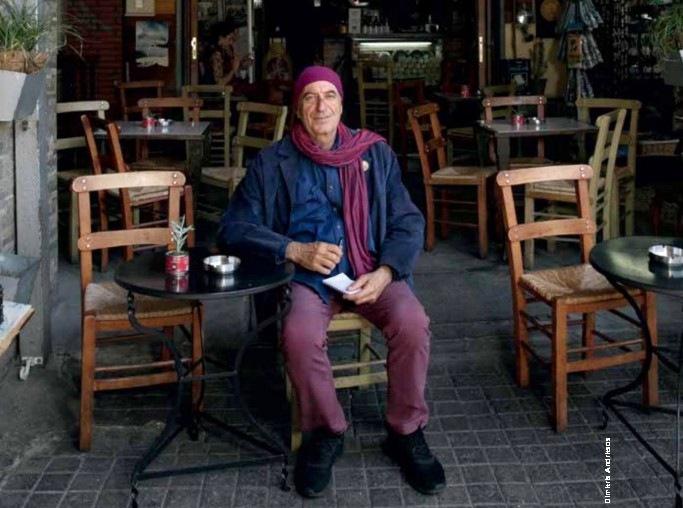 I remember my wonder when trying the brownish eggs, boiled with onions according to at the century - old traditional Sephardic recipe, offered to me outside Yahudi Hamam, in Louloudadika, the flower market, across the road from Modiano city market, with its graceful gables; this is where, as a primary school boy, I heard a bayat -seasoned merchant speak in 4 languages-French, English, Turkish and Ladino, besides our own Greek. Such bourgeois grandeur is long gone. Where are the spirited birbanti - scoundrels who used to warble in the folk’s markets? What a place Kapani was! Mixed patois, clever innuendos, crazy calembours –jokes, refugees’ proverbs, impromptu verses and that love –hungry look, sparking and burning with stiff desire- all gone!

It looks as though we will no longer be allowed to come on to anyone –will we be arrested in flagrante delicto? -(and that will be all for “amorous” Thessaloniki! ); we will be forced to stop calling the Gypsies we loved so Tzigane and, instead, call them Roma, by those who privately call them Pikeys or Chavs and would not even spit on them. The city’s Gypsies have been uprooted from their mahalleler- quarters- with the exception of Dendropotamos; our ear has ever lost the joy of their skillful or clumsy music that was heard in the city vacant lots or old kapeleia-taverns.

Thessaloniki is a grand and privileged city with a glorious, yet truly turbulent past, intense intercultural osmosis and three ethnic groups-Jews, Ottomans and Greeks –harmoniously living in it for half a millennium; it echoes-albeit- different in composition-of Smyrna – Izmir, to which it is truly similar in many aspects, more so than any other city, but its historical authenticity was -alas! -attacked in a scandalous manner and with devastating consequences, by sterile ethnocentricity, navel-gazing localism deep state politics, “deep church” bigotry and other bleak forces, not to forget human indifference..The disappearance of Mevlevi Dervish Tekke, in Ano Poli –the Old City, that used to be the most beautiful Islamic monastery in the Balkans, and the demolition of several of the splendid mansions of the old city sea front are just two examples of such sad cultural losses.

Still, leaving aside all these negative aspects, this urban centre that has been inhabited without interruption for centuries does have some unique attributs.

It is a “Byzantine” city par excellence, with its glorious and humble evocative churches; along with the walk along the Kastra, the old city walls, a visit to the city churches should be an unfailing tourist attraction. This view of the enchanting sunset should draw painters to capture it, as was the case with some European soldiers, in the beginning of the previous century, when the city was occupied by its “Allied” troops, before the devastating fire of 1917. It is not as if there is another city in the whole world, where, on the clear day, one can come face-to-face with the picks of Mt. Olympus, can converse in one’s mind with the Twelve Gods! In any case, our neighbor, ‘cloud gathering’ Zeus, forgets us not and shrouds us in a thick and heavy mist, corrosive humidity, that pierces through to the very marrow of our bones for long stretches of time. 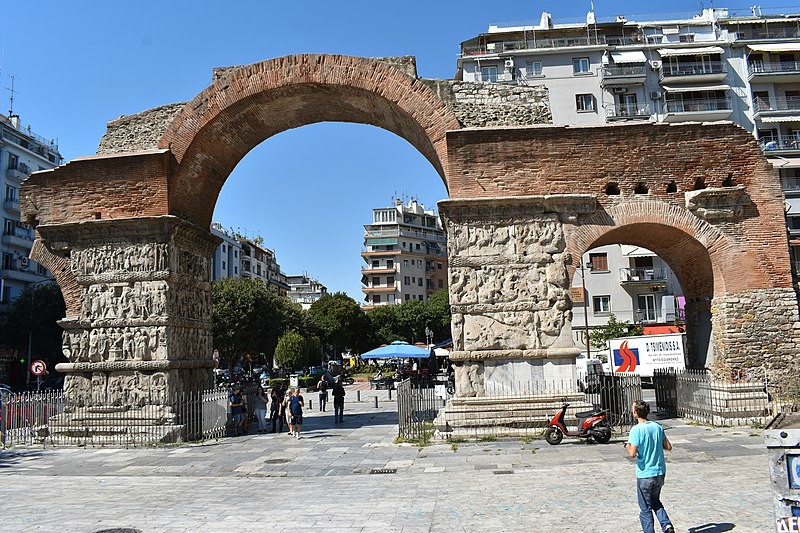 This ayaz –chill soaked the souls of our emblematic poets; their temperament, fermented in mystery, joys and – above all else – the poisons of this deeply –scarred city .Each of them left their mark and shaped its contemporary myth: Pentzikis, also serving through his singular worship of Orthodox Christianity; Karelli through her metaphysical vision; Ioannou carrying a cross of his own and facing his private passion; Aslanoglou, with his unnerving sensuality; Christianopoulos, along his folk pilgrimage; Anagnostakis, true to the northern star of his social struggles. At times an intensive spirit of resistance arose among the people of Thessaloniki, the very first expression being that of “federation” in the early twentieth century. Later there came the tobacco workers’ strikes and the Lambrakis’ Peace Movement. I often stand devotedly –as do other citizens, I believe- at the site of Grigoris’ heinous martyrdom and reflect on the decline of the city, the reason that made it regress and sink into a “Neo- Dark Age” in recent decades. It is said that, since 1964 up to 3000 Lambarkis’ Movement followers were active in the city with a Renaissance- like cultural activity led by its Youth secretary Chronis Missios. Recently the city seems to be rising in response to circumstances and to be opening its wings to the world. University students! Here is a robust everlasting presence! The city pulsates with their youth, matching to the bit of its own drum. Their “apolitique” attitude is scandalous at such times of economic and social crisis, as they wander the University Campus (erected after a sacrilegious abuse: the Jews cemeteries having been torn down), or around the various fashionable waterholes, that mount new ways of life. In the past it was the City Wall District, more recently Valaoritou District and just yesterday Olympus Street. Yet, the young seem to have no interest in cultural action or any intellectual event, although few take place, which are, nonetheless, noteworthy. Nor do they love Thessalonikis’ popular culture, which seems to be disappearing for ever as far as ethos, huy –way of life, speech manner or entertainment goes. In any case, all the taverns and hung outs of our youth , in Ano Poli, - the Old City, in the city center, the port, Vardar Square or other parts of the town, our music and all nighters – a century old “popular music epic”-have disappeared. One wonders what the character of this city is; what are the current ideologies, cultural spirit and personalities that set the tone of Thessaloniki now? Very few care about such things today. This is where the pioneers of intellectual and artistic expression used to thrive. Many creative minds, musicians, singers, painters and writers have set sail for Athens in pursuit of making a living and finding some recognition. There home town cannot keep them here –this is much truer now than ever in the past. The state failed-or perhaps never even tried- to create a second center. Nor did Thessalonians make an effort to do so, nor its authorities or its people. Various obsessive fixations prevent the city from lifting its spirits. At the port, a favorite place for the young and the cinephiles, opposite the Red Cross building, gapes the skeleton of mythical three storey cabaret. Ladadika, the old whole-sale olive oil market, regenerated and bright, tops tourists’ gastronomic choices. Vardar Square, the once infamous sinful district has turned into a “Chinatown” community. Around midnight, teenagers adorn the courtyard wall and the three alleys of Hagia Sophia Church. The Rotunda, the old “Pantheon” looms like a palimpsest open for all. Kamara- the old roman Triumphant Arch remains, as it has always been a meeting point for young groups of friends in the exited expectation of romantic rendezvous.

Thessaloniki is a poison for which there is no antidote. For me it is a life sentence of ambivalence between attraction and repulsion. A mystical force keeps me prisoner and -as though I am under its spell- I will never abandon it.