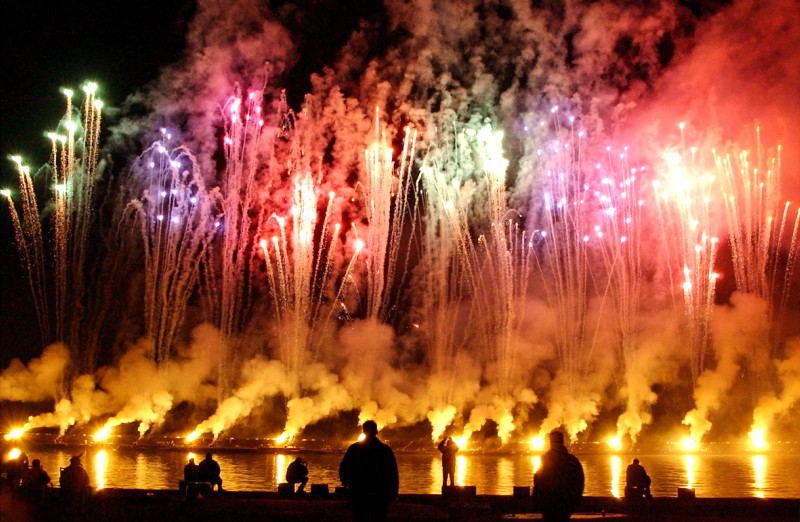 Greece’s Carnival season,known as "Apokries", is the festive season preceding Lent, a period of masquerading, eating, drinking and dancing, which reaches its peak with extravagant parades of giant floats and colorful street groups. Traditionally, it begins ten weeks before Greek Orthodox Easter and culminates on the weekend before "Clean Monday," (Ash Monday) the first day of Lent. "Apokria", literally means "goodbye" to the period of meat-eating, or abstinence from meat (Apo-kreo, meaning away from meat).

The first week of the carnival is typically free from fasting up to Meatfare Sunday, which is the last day of meat consumption until Easter. The Thursday preceding Meatfare Sunday kicks off a long weekend of celebration that gives everyone the perfect excuse to get the meat out of their freezers and refrigerators – and is also another excuse to have a party; this Thursday is known as Tsiknopempto -literally Charred, Smoky or Barbeque Thursday- because of the all-pervading scent of grilled meat in the air, as family and friends gather at taverns or backyards to consume generous quantities of meat and celebrate before the beginning of Lent. 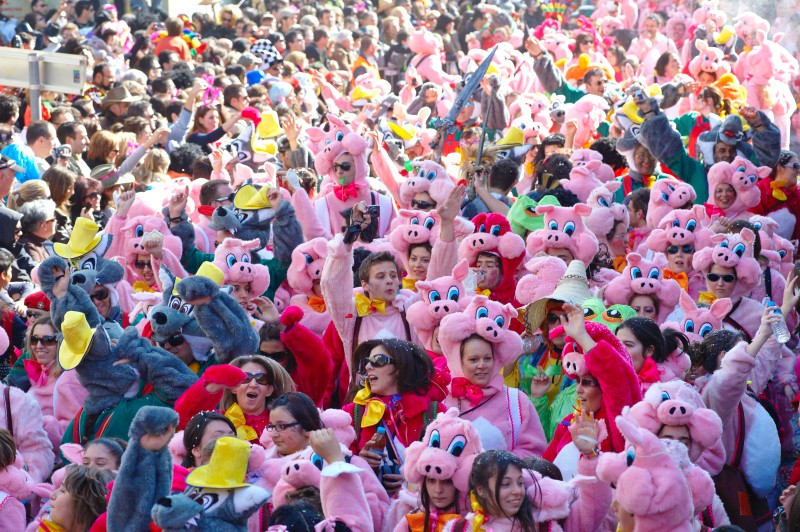 The last Sunday of the Carnival period is known as Cheesefare Sunday or Tyrofagos as only dairy products can be consumed on this day. On this weekend preceding Clean Monday, carnival celebrations around Greece culminate with parades and masquerade parties that revive local traditional customs, as carnival in Greece is directly linked to each region’s cultural heritage.

Clean (or Ash) Monday is a public holiday in Greece, marking the end of the festive carnival season and the beginning of 40-day period of Great Lent, known as "Sarakosti". Weather permitting, people spend Clean Monday outdoors, hold picnics, and children fly kites. Since it marks the beginning of the fasting period, the consumption of meat, eggs and dairy products is traditionally forbidden, with fish being eaten only on major feast days, though shellfish and mollusks are permitted. Thus special food is laid on the table for the Clean Monday feast: lagana (a special unleavened bread eaten only on this day), taramosalata (a fish roe spread), dolmadakia (vine leaves stuffed with rice), grilled octopus, gigantes plaki (oven-baked broad beans), seafood salads and shellfish, as well as a special tahini dessert known as halvas, are but a sample.

Patras: The King of Greek Carnivals

The port city of Patras hosts the biggest carnival in Greece, and one of the biggest in Europe. The "king" of Greek carnivals begins in January with an announcement by the town crier, featuring a variety of events, including balls, parades, street theatre and much more. The carnival reaches its peak on the last weekend, with a parade on the Saturday, in which participants take to the streets holding torches, and the spectacular floral, artistic, and satirical floats parade on Sunday, complete with Carnival King and Queen in full splendor. The Patras carnival is best known, however, for the many thousands of participants of all ages, the events taking place at homes, bars, and streets all around, which turn the whole city into one gigantic party. 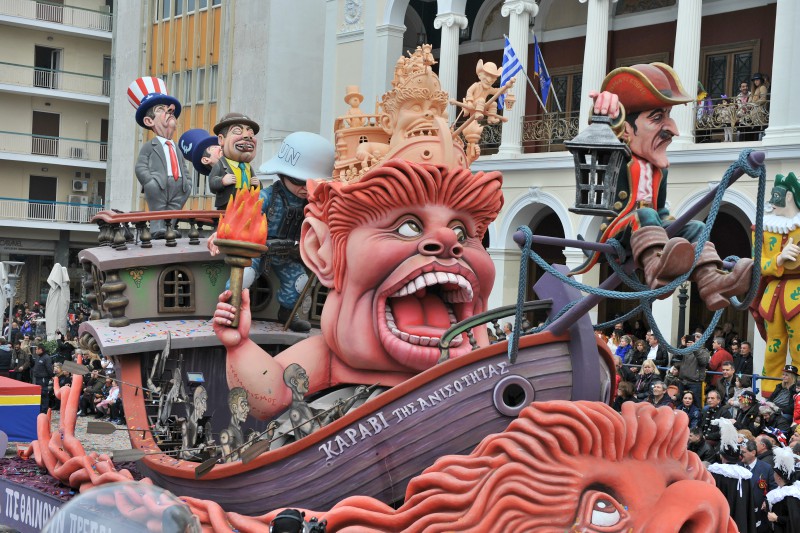 The city of Xanthi in northeastern Greece hosts one of the most popular carnivals in the country. The Xanthi carnival began in 1966 as an urban event, but has come to incorporate many elements that rest on the city’s multicultural character, making it the most folkloric of urban carnivals. The highlight is the Folk Parade on the Saturday before Clean Monday: folk dance groups from the town’s Cultural Associations and guest groups from all over Greece parade through different neighbourhoods of the picturesque Old Town, singing and dancing, and finally merging in an all-night Balkan folk music fiesta in the main square. Cheesefare Sunday leads to the custom of Burning the Tzaros, a human effigy placed on top of a pile of brushwood. 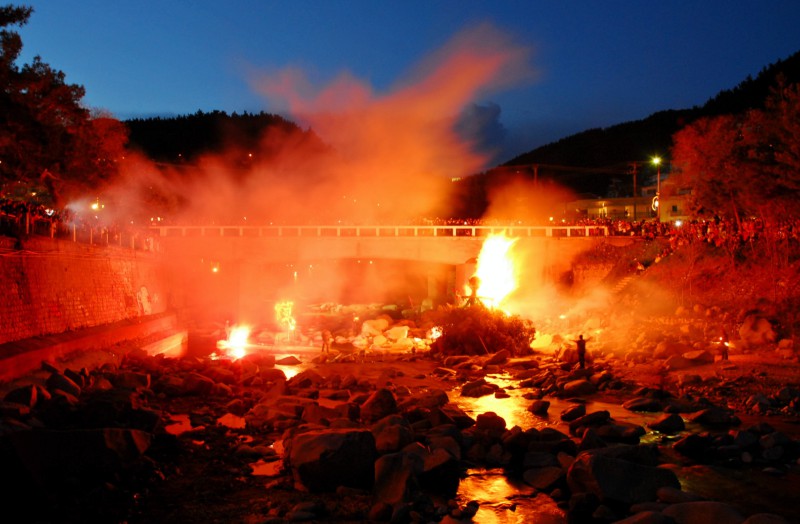 The "Old Men" of Skyros

The carnival on the Aegean island of Skyros comes alive with the sounds of clanging goat bells. These are worn around the waists by local men who take part in the carnival playing the role of geros (old man), a figure dressed in a hooded black cape and hanging goat skin. The "old men" run through the streets individually or in groups, singing, dancing and making as much noise as possible, while locals and guests toast, drink and dance with them.

The harbor town of Galaxidi in Central Greece is one of Greece’s top destinations, especially during carnival season. The picturesque town never fails to impress with its tranquil charm and its rich maritime heritage, notably the old captains’ mansions - the so-called kapetanospita. During Carnival, the town revives the unique custom of "alevromoutzouromata", which dates back to the heyday of the town’s merchant fleet as a fun event for departing sailors at the end of the Carnival season. On Clean Monday, Galaxidi is transformed into a battlefield, as hundreds of people pelt one another mercilessly with large quantities of flour and dance around the fires – the most daring even jump over them! 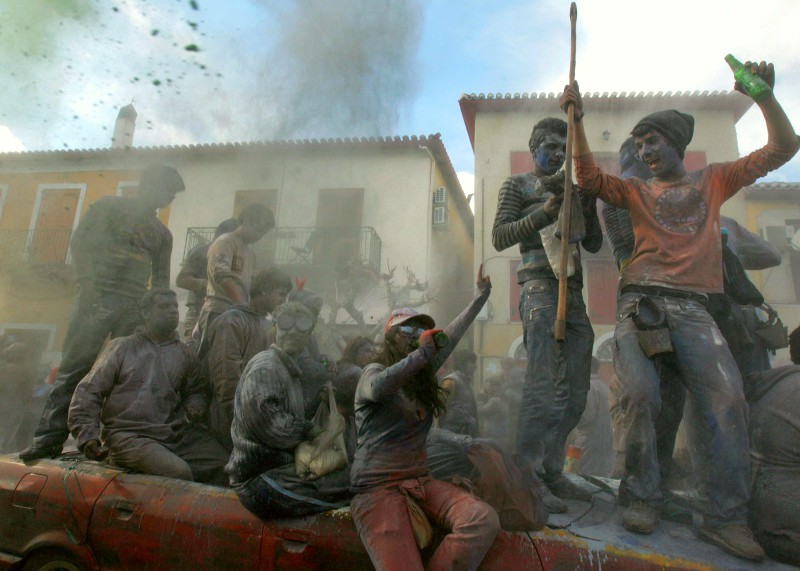 The custom of “Giannitsaroi and Boules” is the most renowned happening in Naoussa. Participants include exclusively unmarried men who dress-up as "Genitsaroi". "Boula", the bride, is also performed by a man. Children, together with musicians playing traditional instruments, also take part in the event. "Ragoutsaria", as the Carnival of Kastoria is called, refers to the revival of the ancient Dionysian ceremonies and aims to help the locals forget the troubles of the year. Beyond its symbolic interpretations, Ragoutsaria give the city’s festivities a playful touch, attracting visitors from all over Greece. 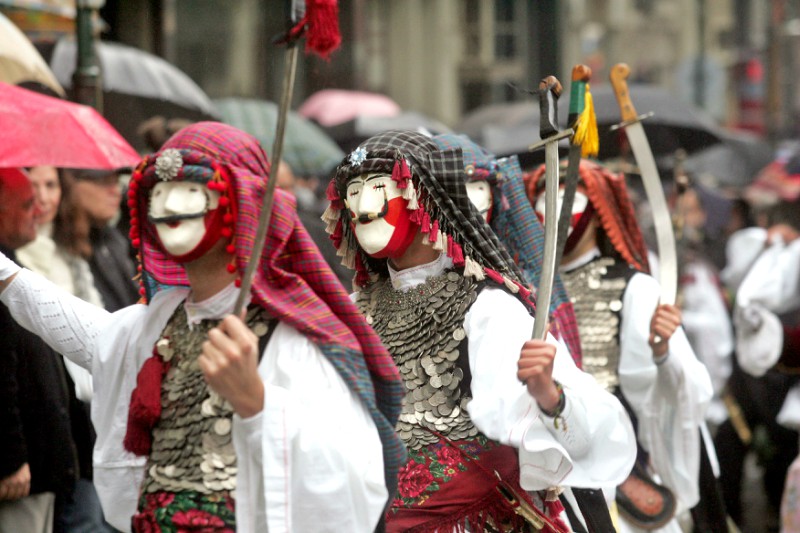